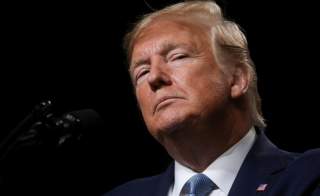 With the Senate’s vote to acquit Donald Trump on charges of abuse of power and obstruction of Congress, he becomes the third president to avoid being removed from office after an impeachment trial. Andrew Johnson avoided it by one vote. Bill Clinton emerged with a 55–45 vote on a perjury charge and a 50–50 vote on obstruction of justice. Trump’s margins were much more sweeping. Only Sen. Mitt Romney (R-Utah) broke with the other Republican senators to vote guilty on the charge of abuse of power. “The president,” Romney said, “is guilty of an appalling abuse of public trust.”

For Trump, the Romney move will rank as a gross betrayal, or at least he will portray it that way, even though he can’t be wholly surprised by his move. The video that Trump posted on his Twitter feed of the State of the Union speech shows Romney wanly clapping at its conclusion. Liberals are cheering Romney as a hero, while conservatives are denouncing him. Trump himself will want revenge. Donald Trump, Jr. tweeted, “Mitt Romney is forever bitter that he will never be POTUS. He was too weak to beat the Democrats then so he’s joining them now. He’s now officially a member of the resistance & should be expelled from the @GOP.” It’s unlikely, though, that Republicans will expel him and thereby shrink their majority.

Part of the sting is that Romney’s action is historically unprecedented. Aaron Blake notes, “Both Andrew Johnson and Bill Clinton saw some of their fellow Democrats in the House vote to impeach them, but both of them kept their party completely in-line when it came to the Senate. In that way, Trump’s impeachment is actually now historically bipartisan.” Nor is this all. The fact that he was the sole Republican to vote for Trump’s impeachment on the first count, as well as the party’s former presidential candidate, means that his vote is acquiring outsized attention.

Still, impeachment served not to magnify anxieties about Trump among Republicans but to solidify his support. His approval rating in a Gallup poll has reached 49 percent and 94 percent of Republicans approve of his presidency. A strong economy is boosting his 2020 prospects. And the Ukraine affair may well fade away in public memory by November, though Democrats will continue to depict the impeachment trial as a coverup. Last week, Senate minority leader Chuck Schumer declared, “If there are no witnesses, no documents in this trial, there will be a permanent asterisk next to the acquittal of President Trump written in permanent ink.” Even as the Senate was voting, however, national security adviser Robert C. O’Brien said in a Wednesday speech, “Look, I’m not aware of any request the president made to investigate the Bidens per se. I think what the president wanted done was he wanted the Ukrainians to investigate corruption in the Ukraine and he made that very clear.”

Trump has now survived two potentially mortal threats to his presidency. The first was the Mueller report. The second was impeachment. As he heads into the 2020 campaign, Trump will seek to use both as a bludgeon to batter his opponents into submission. The odds that he will succeed are not insubstantial.