The Importance of U.S.-Mexico Border Security 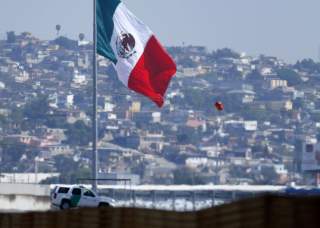 The United States and Mexico share vitally important security, energy, and economic interests that require extensive cooperation and trust to achieve success. As Mexico’s president-elect Andres Manuel Lopez Obrador prepares to take office in December, I believe the next chapter in U.S.-Mexico relations will be critical to building on current efforts and increasing positive results for both Americans and Mexicans alike.

Our two countries have a long history as neighbors, and we are deeply integrated on many critical security priorities. Violence in Mexico affects U.S. border towns, growing amounts of fentanyl and precursor chemicals from China are transiting Mexico to the United States, and opium poppy cultivation in Mexico continues to surge, contributing to the U.S. opioid crisis.

Last year, there were twenty-nine thousand murders in Mexico, including twelve journalists, making Mexico the world’s most violent country for journalists outside a war zone. At least 130 politicians in Mexico were also killed in the run-up to its elections in July. While Mexico has taken significant steps to address this spiraling security situation, corruption and impunity continue to challenge efforts.

I have spent a large part of my life advancing U.S. security interests, and I firmly believe the U.S.-Mexico relationship is unique in its importance and impact to the American people. This relationship is equally significant to Mexicans. Both countries have a vested interest in strengthening our security efforts to combat criminal groups and their illicit activities that poison our populations.

Even amidst challenges, Mexico has made substantial strides in addressing its security situation and professionalizing its defense and justice institutions. Under the Mérida Initiative, a key partnership between both countries, our cooperation has enabled joint drug interdiction, new training standards for police and judges, a new accusatorial justice system, and a new communication network for Mexican agencies in its southern border region.

The United States rightly places a high priority on securing its borders, and its partnership with Mexico is essential to achieving U.S. objectives. Mexico has been a transit country for many migrants from El Salvador, Guatemala and Honduras who have fled violence or lack of jobs. However, Mexico has worked to strengthen security on its southern border, and it has seized billions of dollars in illicit drugs and currency.

Military exercises like Operation Hornet, which focus on threat networks along Mexico’s southern border, have also identified at least thirty-six illicit organizations in Mexico and throughout the hemisphere. Recently, the U.S. Drug Enforcement Administration and Mexico announced additional strategies to fight the financial infrastructure of Mexico’s drug cartels.

Mexico is also a member of the Inter-American Defense Board, which plays a critical role in training militaries in the region, and this year, will host the Eighth Conference of Defense Ministers of the Americas in October. Mexican officers participate in the U.S. Joint Taskforce-South (JIATF-S) to counter threat networks, and Mexico has provided significant humanitarian and disaster assistance to countries in the region and contributed military personnel for peacekeeping operations around the world.

In my view, Mexico’s leadership in these areas has been vital, and Mexico has shown itself to be a dependable, committed U.S. security partner. Although we can improve our cooperation to combat corruption, modernize border technology and energy infrastructure, and better support human rights, in the days ahead, I believe the United States should do more to prioritize its security partnership with Mexico and together build on efforts that are achieving results.

Rep. Paul Cook represents the 8th District of California and is Chairman of the House Foreign Affairs Committee’s Subcommittee on the Western Hemisphere. Cook served as an infantry officer and retired after twenty-six years as a colonel in the U.S. Marine Corps. During his time in combat, he was awarded the Bronze Star and two Purple Hearts.

Image: A U.S. border patrol officer sits in his vehicle looking out over Tijuana, Mexico from San Ysidro, California February 25, 2015. U.S. Senate leaders took a tentative step on Tuesday that could avert a partial shutdown of the Department of Homeland Security, but it was unclear if House Speaker John Boehner and restive conservatives would support a new concession to Democrats. REUTERS/Mike Blake