India and Pakistan on the Brink: A Nuclear Nightmare in South Asia 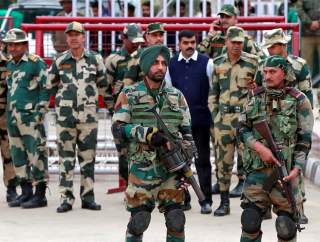 With last week's U.S.-North Korea summit in Hanoi, Congressional Democrats’ revolt against President Donald Trump’s state of emergency and Michael Cohen's testimony before the House Oversight Committee; you may have missed the news that the Indian Air Force launched airstrikes against targets in Pakistan.

This was quietly one of the most dangerous crises of the post–Cold War era.

On February 26, Indian fighter jets attacked a terrorist training camp operated by the Pakistani-based group Jaish-e-Mohammed (JeM), in the Pakistani province of Khyber Pakhtunkhwa. The attack was a reprisal for an earlier suicide bombing in Kashmir on February 14 that killed over forty Indian paramilitary police.

The raid was the first instance since the Indo-Pakistani war of 1971 that either of the two powers have used airpower against the other. It also marked the first time in history that a nuclear weapons state has conducted airstrikes against another nuclear weapons power.

There is a very good reason for that. Deploying air assets against another state signals a level of hostility that far exceeds cross border skirmishes. The ability of a state to field high-tech aircraft is often seen as a metric of sophistication, making air power a powerful symbol of national pride. It also worth noting that the Mirage 2000 jets used by the Indian Air Force in the raid are the same type of aircraft that deliver some of India’s airborne nuclear weapons. When a country is willing to go on the attack with tens of millions of dollars worth of airplanes and bombs, including aircraft that may or may not be carrying its nuclear weapons, it can trigger a spiral of escalation that can quickly get out of control.

That spiral was quickly triggered. Pakistan responded to India’s air-assault with artillery strikes and conducted airstrikes of its own. Both sides lost aircraft, with Pakistan claiming to have shot down two Indian jets and captured one of the pilots, while India claims to have downed a Pakistani jet.

Fortunately, the capture of the Indian pilot, Wing Commander Abhinandan Varthaman, was a positive turn in crisis, providing a human face to the standoff and ultimately leading to his release by Pakistan as a “peace gesture” that helped defuse tensions.

It could have been much worse.

India and Pakistan possess two of the fastest growing nuclear arsenals in the world. Hans Kristensen of the Federation of American Scientists, estimates that India possesses some 140 nuclear weapons, while Pakistan has around 150. Of particular concern is Pakistan’s growing inventory of smaller, tactical nuclear weapons. According to Kristensen, these weapons are part of an effort “to create a full-spectrum deterrent that is designed not only to respond to nuclear attacks, but also to counter an Indian conventional incursion onto Pakistani territory.”

This is extremely concerning. Just possessing nuclear weapons meant to be used against conventional forces, could lower the threshold for their use during a conflict.

The Trump administration agrees, with officials having gone on the record saying, “we are particularly concerned by the development of tactical nuclear weapons that are designed for use [on the] battlefield. We believe that these systems… increase the likelihood of nuclear exchange in the region.”

These fears are more than just hyperbole. Earlier this week a retired Pakistani general told his colleagues that in order to deter India, “our response should be to escalate and push the envelope of hostilities so that nuclear war is a likely outcome.”

We know that this sort of thinking is misguided. Why? Because the United States once had a similar strategy.

During the Cold War the United States stockpiled thousands of tactical nuclear weapons, including nuclear bazookas, landmines and artillery shells as a counter to Soviet conventional superiority in Europe. The plan was simple. If an army of Soviet tanks rolled through the Fulda Gap, we would would counter with small scale nuclear weapons. The theory went that by showing you were willing to use a small nuke, the enemy would consider that you might just be crazy enough to use your big ones too, causing them to back down.

This strategy was unironically referred to as the Madman Theory. Unfortunately, under scrutiny, it turned out to be just that, mad.

In 1955, the Department of Defense conducted a wargame called Carte Blanche in which more than three hundred simulated tactical nuclear weapons were used against Soviet targets on German soil with the aim of halting an advancing Soviet army. When the simulated dust settled, an estimated 1.7 million Germans had been killed, with 3.5 million wounded and incalculable number of additional casualties resulting from radiological fallout. When the results of the exercise were leaked to the press, they “produced widespread unrest and agitation” in West Germany over the proposed U.S. nuclear strategy.

The Reagan administration tested the premise again in 1983 with the wargame Proud Prophet. This scenario saw NATO launch limited nuclear strikes against Soviet targets in response to a conventional provocation. But instead of backing down, the Soviet team doubled down.

“The Soviet Union team interpreted the nuclear strikes as an attack on their nation, their way of life and their honor. So they responded with an enormous nuclear salvo at the United States,” writes Department of Defense advisor and nuclear historian Paul Bracken. “The United States retaliated in kind. The result was a catastrophe that made all the wars of the past five hundred years pale in comparison... a half-billion human beings were killed in the initial exchanges and at least that many more would have died from radiation and starvation. NATO was gone. So was a good part of Europe, the United States and the Soviet Union. Major parts of the Northern Hemisphere would be uninhabitable for decades.”

The results reportedly shocked President Ronald Reagan so badly that his schedule had to be cleared for the rest of the day. A few months later, he famously told the American people that, “A nuclear war cannot be won and must never be fought.”

The lessons of these wargames apply to the Indian subcontinent as well. Recent studies have estimated that regional nuclear war, such as one between India and Pakistan, could lead to the deaths of some 2 billion people worldwide.

To prevent this nightmare from becoming a reality, the international community must condemn further acts of violence and build space for the conflict to be mediated, before the situation escalates further out of hand. It is not without irony that as President Trump negotiates a nuclear agreement with North Korea, another nuclear crisis is unfolding out on the same continent. Under normal circumstances the United States would have already dispatched mediators to the region to defuse the crisis. As it stands, Washington has been painfully slow to respond.

The current crisis is a symptom of a larger problem. The last five years have seen a dramatic increase in tensions between nuclear weapons states across the board. The U.S.-Russian relationship has soured to a point not seen since the Cold War, and a cornerstone of the international arms control regime, the Intermediate Nuclear Forces treaty, has been abandoned. Russia and NATO forces have engaged in direct hostilities in Syria, even leading to the downing of a Russian fighter-bomber. The number of confrontations between U.S. and Chinese assets in the South China Sea have reached an all-time high. Sooner or later our luck will run out and the unthinkable will happen.

At the height of last week’s standoff, Pakistan’s Prime Minister Imran Khan asked India’s prime minister Narendra Modi, “given the weapons capability on both sides, can we afford a miscalculation?”

The world must respond with a resounding no. These types of crisis can never be allowed to escalate into a full-blown nuclear powers conflict.

The stakes are far too great.

Geoff Wilson is a communications manager at Ploughshares Fund, a global security foundation. The views expressed are his own.

Will Saetren is a Project Lead at CRDF Global where he specializes in nuclear security. The views expressed are his own.