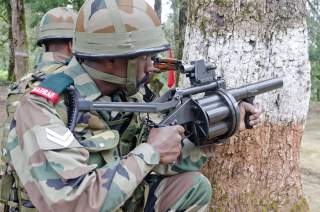 Last June, President Obama designated India a “major defense partner,” committing the United States to increased cooperation in defense trade and technological development. As part of this commitment, he granted India “license-free access to a wide range of dual-use technologies.”

The following month, India issued a letter of request regarding the price and availability of the Guardian—the unarmed variant of the MQ-9 aerial drone. Seven months later, that prospective sale remains in limbo.

Designed to provide intelligence, surveillance and reconnaissance in a maritime environment, the Guardian would greatly enhance India’s efforts to monitor its coasts, conduct search-and-rescue operations, and secure its island territories and naval assets in the Indian Ocean.

China’s expansive territorial claims and island building in the South China Sea are well known, but China has also expanded its area of operations by establishing a navy base in the East African nation of Djibouti. From there, China can gain easy access to the Indian Ocean. The sale of the Guardian would not only benefit India, but could assist the United States in monitoring areas of shared interest and concern.

The Heritage Foundation’s 2017 Index of U.S. Military Strength documents how global security demands currently outpace U.S. capacity and readiness for operations. The transfer of defense systems and technology can reduce the demand on U.S. forces by enabling allied and partner nations to carry more of the weight of regional security. With the enhanced maritime domain awareness afforded by the Guardian, India can more effectively monitor Chinese excursions in and around the Indian Ocean, and—where national interests overlap—alleviate the need for direct U.S. presence, allowing the Pentagon to reallocate limited resources.

In addition to the benefits provided to both buyer and seller individually, defense trade also increases opportunities for, and gains from, security cooperation. Among allied nations, common maintenance and support requirements reduce logistic demands for joint operations, and shared software improves the ease of communication and information transmission, which in turn increases combat effectiveness. The broader employment of shared platforms and technology would increase opportunities for cooperation with India and foster valuable working relationships.

However, the sale of drones is closely scrutinized under the guidelines of the Missile Technology Control Regime (MTCR), and remains tightly regulated under U.S. export controls and licensing requirements. Currently, only the United States and a few of its closest allies operate the MQ-9.

Export controls should serve the ends of Washington, its allies and its partners, while constraining its foes. Controls for the sake of controls can unnecessarily constrain the market for U.S. defense systems and technologies. Foreign military sales help domestic manufacturers keep production lines open and reduce production and procurement costs for the U.S. and its foreign customers through greater economies of scale.

The United States currently enjoys a technological advantage for unmanned systems, but competitors are quickly closing the gap. An increase in foreign military sales (FMS) would help sustain the U.S. technological edge by increasing opportunities for independent research and development. This allows contractors to perform exploratory research, which can lead to the development of innovative products and technologies, and recoup some of their costs for research that produces items of interest to the Defense Department. These research and development cost reimbursements are statutorily limited for DOD purchases, but the same limitations do not apply to FMS—providing increased opportunities for the development of capabilities that help sharpen the U.S. technological edge.

The MQ-9 has performed incredibly well. The airframes have proved to be amazingly durable, with many lasting well beyond their expected service lives. Unfortunately, limited clientele could force General Atomics to shut down the MQ-9 production line after delivery of the last U.S. Air Force order in 2018, unless Washington allows them to expand their FMS customer base.

While originally designed to limit the proliferation of missile technology, the MTCR was amended to include any unmanned system with the attributes necessary to deliver a nuclear weapon, including any unmanned aerial system with the potential to deliver a five-hundred-kilogram payload more than three hundred kilometers. Although the Guardian is not outfitted to carry a payload, its range, power and carrying capacity fall within the scope of the MTCR.

Unfortunately, since the United States is not the sole source supplier of unmanned combat systems, these controls have not stopped the spread of drone technology. The thirty-five partner nations of the MTCR are called upon only to “exercise restraint in the consideration of all transfers of (controlled) items,” yet the Obama administration withheld drone sales to all but the closest U.S. allies. This left a vacuum in the market that China was quick to fill. As the leading exporter of armed drones, China has exercised far less restraint in its exports of both armed and unarmed drones, seemingly selling to any country willing to pay. Meanwhile, India’s request remains stuck in the bowels of U.S. bureaucracy.

As the newest signatory of the MTCR, India has agreed to recognize the appropriate application of drone technology—a move that strengthens India’s status as a major defense partner. The mutual benefits of a sale to India are numerous. While there will always be risks associated with technology transfers, imposing arduous drone licensing restrictions on close defense partners like India does not serve U.S. economic and security interests.

To guarantee U.S. influence in a growing market and to maintain a technological edge, the Trump administration should promptly approve the sale of the Guardian to India. Doing so will bolster the U.S.-India defense partnership, improve our global security posture, and advance our own aspirations for economic growth and technological superiority.

Rachel Zissimos is a researcher in The Heritage Foundation’s Center for National Defense.