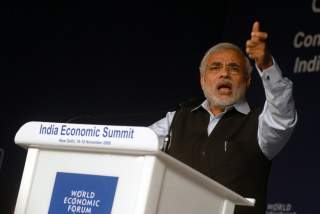 It appeared to be a done deal. Last December in Bali, the 159 member countries of the World Trade Organization (WTO) signed off on the trade facilitation agreement (TFA). While not garnering much media attention, it should have. The accord was easily the largest multilateral trade agreement since the omnibus GATT (WTO’s predecessor) Uruguay Round in 1994. The TFA sought to reduce red tape and relax customs rules, thus reducing frictions in international trade. A study by the Washington-based Peterson Institute for International Economics estimated that the accord could add as much as $1 trillion to the global economy and create 21 million jobs.

According to the Bali timetable, the TFA would take effect in mid-2015 after what WTO officials expected would be pro forma approval of the agreement hashed out by negotiators.

Then India backed out of the deal.

Why would a supposedly business-friendly leader, who was elected in an electoral landslide on a platform promising economic reform, pull the plug? Narendra Modi, India’s new prime minister, refused to sign the deal until the WTO changes its rules to allow governments to expand food subsidies for the poor. Some aspects of India’s food-security program, like stockpiling grain, currently violate WTO rules.

Agriculture employs nearly half of India’s workforce, and more than 70 percent of India’s poor live in rural areas. The rural poor constitute an important vote base for any government in India.

Domestic political calculations may well have contributed to Modi’s decision to hold the TFA hostage to Indian demands on the food-subsidy issue. Understanding India’s sensitivities to reforms involving the agricultural sector, WTO members offered India a four-year “peace clause” to protect it from WTO sanctions while the country transitioned to a new system. But four years from now, India will be getting ready to go to the polls again, meaning the BJP could be blamed for not protecting the Indian farmer when it had the chance to do so.

With the July 31 deadline to finalize the accord, the Modi government had its first real opportunity to reform or eliminate a subsidy program that was riddled with corruption. Moreover, economists had offered alternatives to feeding the poor, including food stamps and cash transfers. Instead, the prime minister, at a time when his political capital may be at its highest, chose to protect the status quo.

New Delhi’s obstructionism at the WTO almost certainly will dampen foreign-investor optimism about the new government’s disposition toward business, and thereby the overall prospects of India’s economy. Many had hoped that with Modi’s rise to power, the country would start to break its protectionist, statist habits.

According to the World Bank, India’s exports-to-GDP ratio was ranked 92nd out of 112 countries in 2013. Looking longer term, the failure of the WTO to implement an effective trade and investment agreement in over a generation is likely to breathe some life back into regional trade accords like the Trans-Pacific Partnership and Transatlantic Trade and Investment Partnership. While India is part of the ASEAN-centric Regional Comprehensive Economic Partnership (RCEP), most developing countries do not have the same opportunity. Perhaps that is one of the reasons they had agreed to go along with the TFA despite their reservations—to keep the multilateral trade regime moving forward.

News of India’s obstruction of the WTO trade deal broke during U.S. secretary of state John Kerry’s visit to India for the fifth round of the Strategic Dialogue talks. While Secretary Kerry did not allow the issue to dominate the visit, he was forthright in expressing U.S. disappointment with India’s position.

It also is unlikely that India’s WTO antics will overshadow PM Modi’s visit to Washington in September. The two sides have a broad agenda to cover, including counterterrorism, defense and security cooperation, the challenge of China’s assertiveness along its borders, Afghanistan’s future and energy issues, to name a few.

And to be fair, the new government has taken some tentative steps on the economy, such as lifting FDI caps in the defense sector to 49 percent and banning the Planning Commission, a symbol of a centrally controlled economy. In announcing the closing of the Planning Commission, Modi pointed out that the federal government was not the main driver of economic growth and that state governments needed to be free to innovate.

As Chief Minister of Gujarat, Modi transformed it into one of India’s most investor-friendly states. That track record gives confidence that he will move in this direction with his national agenda. But the Modi government will need to concretely demonstrate that it is committed to a pro-reform and pro-business agenda. India’s move at the WTO was a step back in this regard.

While no one expects economic miracles to occur overnight, the new government’s taking a more isolationist position on global-trade issues than its left-leaning predecessor was completely unexpected.

William T. Wilson is a Senior Research Fellow in the Asian Studies Center at The Heritage Foundation.

Lisa Curtis is a Senior Research Fellow in the Asian Studies Center at The Heritage Foundation.