India's Hindu Nationalists Got What They Wanted in Kashmir 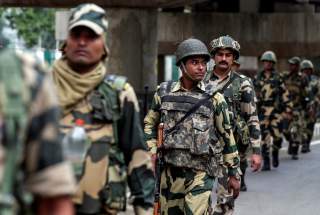 The Indian government’s decision to abrogate the state of Kashmir’s special status was duly rubber-stamped by Indian houses of Parliament on August 5 and 6. Indian President Ram Nath Kovind used a provision in Article 370 to do this. He needed the concurrence of the State assembly to do so. However, since the Assembly is in limbo with all powers concentrated in the hands of the New Delhi-appointed governor, the latter's concurrence was considered to suffice for the implementation of the presidential order. Kovind’s decision was made on the advice of the cabinet and he declared that all provisions of the Indian Constitution would now apply to Kashmir. Ironically, a provision of Article 370 was used to nullify the basic thrust of that same article. Article 370 was meant to preserve the special autonomous status of Jammu and Kashmir but has been made inoperative by the use of one of its own provisions.

Close observers of the Indian scene had anticipated an end to Kashmir’s special status for some time, for various reasons. First, this move has been part of the Hindu nationalist BJP party agenda since it was established in April 1980. The BJP had an aversion to the special status, even if only on paper, given to Muslim-majority Jammu and Kashmir under Article 370 of the Indian Constitution. It had also been a part of the founding agenda of its predecessor, the Jan Sangh, since it was launched in 1951 by the then-leading light of Hindu nationalism Shyama Prasad Mookerjee.

The provisions of the article were products of negotiations over six months in 1949 between the central government, including Prime Minister Jawaharlal Nehru and Home Minister Sardar Patel, and the Kashmir leadership led by its Prime Minister Sheikh Abdullah. Article 370 was part of the deal that gave the stamp of the Kashmiri people’s approval to the state’s accession to India. This accession and, therefore, Article 370, have been opposed by Pakistan and led to three wars—in 1947-48, 1965, and 1999—between the two neighbors. When the BJP was in office from 1998 to 2004, it was unable to change Kashmir’s special status because it was part of a coalition and its partners were against any such action. Now the BJP has had the opportunity to do so because it has a clear majority in Parliament by itself.

Second, and equally important, over the years Article 370—the article that was supposed to guaranteed Kashmir’s regional autonomy—had become merely a shadow of its original self. Article 370 was eroded by the gradual encroachment of the Indian federal government and the concurrence of supine Kashmiri politicians to weaken the powers exclusively reserved for the state. The process of its erosion began in 1953 with the removal of Sheikh Abdullah, the greatest leader of the Kashmir freedom movement, from the office of Kashmir Prime Minister (later renamed Chief Minister) by the Nehru government on suspicion that he harbored secessionist tendencies.

Abdullah’s successors were more than willing to see the Center expand its tentacles into Kashmir by successively amending Article 370 as long as New Delhi helped them stay in power. The Indian National Congress Party (INC), which is shedding tears today at the abolition of Kashmir’s special status, was primarily responsible for the attrition of the state’s autonomy when it was in power for six decades.

Even after Sheikh Abdullah returned to power in 1975 by accepting a watered-down version of autonomy guaranteed under Article 370, Kashmir’s special status continued to be more a myth than reality. This was demonstrated very clearly in the 1980s when New Delhi destabilized the state government after Abdullah’s death in 1982. Then-Prime Minister Rajiv Gandhi forced the National Conference party, until then the legitimate face of Kashmiri sub-nationalism, into a shotgun marriage with the INC. The two together then rigged the 1987 state elections to deny the opposition Muslim United Front a sizable number of seats in the state assembly that it was projected to win. The insurgency and terrorism in the Valley in the past three decades can be traced directly to this folly that turned peaceful opponents into violent adversaries. It also provided Pakistan the opportunity to fish in troubled waters and to export Inter-Services Intelligence-sponsored terrorist groups into Kashmir to create mayhem and anarchy in the state.

Article 370, which had lost most of its significance for the daily governance of Kashmir, had over the years become merely a symbol of Kashmir’s autonomy without any real content. New Delhi’s interference in Kashmir was of a much higher order than was the case with any other state in the Union. The BJP government, led by Prime Minister Narendra Modi party President Amit Shah, has formalized the situation by removing the veneer of Kashmir’s special status thus exploding the myth that India’s only Muslim-majority state was being shown greater favor by the Center in comparison with other states.

The abolition of Kashmir’s special status was aimed not so much at changing the governance structure in Kashmir as at appeasing the BJP’s hard-line Hindu nationalist constituency in the rest of India that had been agitating for its removal. It was primarily a message to the party’s base that the BJP government was fulfilling the promise it had made to its ideological supporters. It can also be interpreted as a possible prelude to removing restrictions on non-Jammu and Kashmir residents on buying property in Kashmir and settling there—thus beginning the process of changing the existing demographic balance between religious communities in the state by diluting if not overturning the Muslim majority status of the state.

Many observers feel that the timing of the move and the haste and secrecy with which it was executed was related to President Trump’s recent statement that he was willing to mediate or even arbitrate the conflict between India and Pakistan and that Prime Minister Modi had requested him to do so. The latter part of the statement was promptly refuted by New Delhi, which is averse to any third-party interference in the dispute. Since the Shimla Agreement of 1972 between Pakistan and India, the latter has insisted that the impasse over Kashmir between the two countries could be resolved only through bilateral negotiations. Bilateralism favors the stronger party in a dispute—in this case India—as the experience of the Israel-Palestine negotiations has demonstrated very clearly. Abolishing Kashmir’s special status can, therefore, be seen as preempting any attempt by President Trump to intervene in the matter.

Pakistan has predictably reacted harshly to the Indian move. Islamabad condemned India for its “illegal” and “unilateral” step in abolishing Kashmir’s special autonomous status. Prime Minister Imran Khan has threatened to take the matter to the United Nations Security Council and has asked for support from Pakistan’s close friends such as China, Saudi Arabia, and the United Arab Emirates. Pakistan has also snapped trade ties with India, which in any case were insignificant, and expelled the Indian ambassador from Islamabad. This has conjured up an atmosphere of grave tension between the two countries not witnessed since the Pulwama-Balakot episode of February this year.

At the same time, Khan has been cautious in not allowing Pakistan’s response to escalate into a full-fledged conflict. He has been compelled to do so because of the precarious nature of Pakistan’s economy, which is dependent on an international bailout, and because of the relative indifference of the major powers, including the United States and the United Kingdom, to India’s move. Islamabad’s close friends such as Saudi Arabia and the UAE have also refused to take Pakistan’s side on this issue, the latter clearly stating that it is India’s internal matter. Above all, the Pakistani military brass, which is the real power behind Imran Khan’s throne, is very aware that notwithstanding the nuclear equivalence between the two countries, the imbalance between Indian and Pakistani conventional military capabilities and their respective industrial prowess is likely to have great bearing on the outcome of a conflict, especially in the case of a long-drawn-out war. In the final analysis, they are not willing to risk Pakistan’s territorial integrity, their own humiliation, or a nuclear exchange for the sake of Kashmir.

Consequently, Imran Khan has attempted to dampen public enthusiasm for a full-fledged confrontation by ruling out an attack on India. He clearly implied this in his statement responding to the Leader of the Opposition’s demand in Parliament for a tougher stance against New Delhi. He has, however, warned India that its actions could lead to more Pulwama-type terrorist attacks. Many in New Delhi have interpreted this as indicating Pakistan’s willingness to substantially increase the infiltration of ISI-sponsored terrorists across the line of control into Jammu and Kashmir and even to organize terrorist attacks in mainland India of high magnitude and dramatic impact like the Bombay attacks of 2008.

However, Pakistan suffers from major constraints in this regard as well. The international community, above all the United States, has warned Islamabad not to support terrorist groups active in Afghanistan and Kashmir and threatened serious consequences if it continues to do so. Additionally, Islamabad is afraid that it could be blacklisted and denied access to international financial markets just when it urgently needs loans to stay economically afloat. The inter-governmental body known as the Financial Action Task Force (FATF) is to meet in October to determine whether Pakistan has met enough of its obligations regarding countering and eradicating terrorist groups to be removed from its “grey” list of countries supporting terrorism. Any escalation of Pakistan-supported terrorism in Kashmir at this juncture will, therefore, be highly counter-productive from Islamabad’s perspective because if FATF blacklists Pakistan it will lose access to international financial markets and funding agencies. This would amount to committing economic suicide.