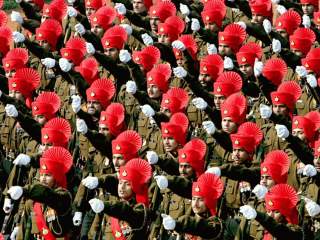 Bharat Karnad is a professor of National Security Studies at the Centre for Policy Research in New Delhi—and the Machiavelli of India. His new book, “Why India is Not a Great Power (Yet),” lays out everything that’s wrong with his country's foreign policy, bureaucracy and defense establishment and how to fix it.

What distinguishes Karnad's thinking about the future place of India in the world is that he is a true realist in the Machiavellian manner. Realism is often confused with being realistic. That's just wrong. Strategic thinkers of every stripe think they are realistic. Being realistic is figuring out what works. Realism is about why it works.

Realists contend ‘power’ serves as the operative force governing the relationship between states. Everything else—structure, treaties, bargains, deals, rules, sanctions, relationships, wars—are all just tools of statecraft. The hand that turns the tool is power.

When it comes to believing in power, Karnad is very much living in the Machiavellian moment. He is fixated on sweeping away generations of Indian geo-strategic architecture that prop up the policies of a non-aligned state obsessed with soft-peddling its influence. Karnad wants India to wield hard power like a hammer.

Machiavelli has been hated by history for just saying that power matters most. Frederick the Great, (ironically probably the most cold-blooded realist of eighteenth-century Europe) wrote a chapter-by-chapter critique rebuking Machiavelli's every thought. The modern British philosopher Isaiah Berlin penned a famous essay on Machiavelli's questionable morals.

Karnad has had his share of critics as well. When it comes to sub-continent security policy, the professor is far from the madding crowd. "Amongst thinkers who relish the notion of a non-aggressive, soft treading India," notes one reviewer, "Karnad's book will spark a fresh round of tut-tuting." He is about as hawkish as they come, including advocating building atomic landmines to block an enemy's passage to India.

But Machiavelli didn't believe in power without moral purpose. Neither does Karnad. Sure, Machiavelli lauded princes who lied and murdered, not because might was right, but because they were trying to get it right. Machiavelli was sick and tired of tiny Italian city-states and their citizens being pushed around, exploited and subjugated by greater powers. He was looking for leaders who could unite the states and stand up to outsiders. Likewise, Karnad wants India to give up its smiley face of foreign policy not for the sake of being more powerful, but for the sake of India.

The Renaissance Florentine and the Post-Cold War Indian are also both prescient in their prescriptions for what ought to be done. If the Italians could have pulled themselves together in a single state they might have been spared centuries of being ravaged by each other and outsiders. Karnad warns his country needs to whip itself into shape and put out a "don't mess with India” sign before others start encroaching on India's space.

The backbone of Karnad's thesis is a set of arguments he has developed for years: Pakistan has preoccupied India for far too long; China represents the greatest challenge to the future of Indian security and ought to be the focus of the country's military and strategic planning; India needs a stronger and more reliable nuclear deterrent; the military ought to extend the country's security perimeter by basing and joint operations with its neighbors; and New Delhi ought to have a strong strategic relationship with Washington. These are all bold ideas grounded in the realist perspective that hard power has an important role to play in enhancing Indian security.

While Karnad may be a good realist, there are good arguments that not everything in his 500-plus page tome is realistic. He insists, for example, that India can maintain sound strategic relationships with Israel and Iran, the United States and Russia. That might have been true when India was peripheral enough to the core interests of powers that a certain amount of infidelity didn't matter much. New Delhi could play on both sides of the fence. That may no longer be true. Karnad can't expect, for example, that the United States will share its very best military technology with a government that still thinks it’s okay to be buddy-buddy with Tehran and Moscow. That's not to say that India should be prevented from having any dealings with both powers; after all, the United States does. But the hard truth is if New Delhi wants the benefits of real strategic relationship from the United States, it is going to have to join the club.

India ought to make the hard choice. There are real benefits for both the United States and India in managing their relationships with China. After all, containing Beijing is a nutty and impractical idea. On the other hand, demonstrating solidarity against Chinese efforts to rewrite international norms for their own purposes makes a great deal of sense. The most promising initiative would be a "Quad Dialogue,” a forum for developing cooperative, synchronized policies among India, Australia, Japan and the United States. These are the key Indo-Pacific powers that can get and keep China's attention.

Beyond devising a diplomatic forum like the quad, the United States needs not only to revitalize its own military capabilities in the region, it has to invest in India becoming a first-class military power. U.S.-India defense cooperation could transform the global arms industry, not only delivering New Delhi the forces it needs, but developing a real export capacity as well.

In the end, Indian realism needs a dose of reality about the future of the U.S.-India relationship. Without that, Karnad risks a fate like Machiavelli’s: seeing the moment pass and the potential for greatness go unrealized in his lifetime.