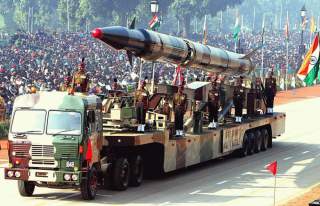 India’s nuclear weapons program is a cornerstone of New Delhi’s security strategy for the 21st century. For most of the post-war period, India badly trailed the established nuclear powers in weapon quality, quantity, and the sophistication of delivery systems.  In recent years, however, India has indicated a willingness to take the steps necessary to becoming a first rate nuclear power.

This article examines the development of the nuclear program over history, the current state of the program and its associated delivery system projects, the strategic rationale of India’s nuclear efforts, and the likely future contours of the program.  The current balance of nuclear power in South and East Asia is unstable, and likely to result in a nuclear arms race involving Pakistan, India, and China.

History of the Program:

Indian work on nuclear technology began even prior to independence from the United Kingdom, but a period of instability and insecurity beginning in 1960 accelerated development. Indian defeat in the Sino-Indian War demonstrated conventional vulnerability, which the inconclusive 1965 Indo-Pakistani exacerbated. US efforts to intimidate New Delhi during the 1971 war with Pakistan also played a role.

India detonated its first nuclear device in 1974, in a “peaceful” nuclear demonstration. Yielding between 6 and 15 kilotons, the test drew widespread international criticism.  Indian nuclear development progressed through fits and starts over the next two decades, with New Delhi reaching an uneasy accommodation with the world’s nuclear community to keep the program in the shadows.  Ballistic missile development continued alongside the nuclear program.

This accommodation broke down in May, 1998, when India tested five devices (four fission, and one thermonuclear device that likely failed). Driven by domestic politics and deteriorating relations with Pakistan, the tests strained India’s relations with the United States, and with the international non-proliferation community. However, they did indicate India’s commitment to a future nuclear defense profile, and confirmed India’s progress with weapons design over the previous two decades.

How Many Nukes Does India Have?

According to the Arms Control Association, India likely possesses around 100 nuclear weapons, mostly of a low yield fission variety.  However, reports indicate that India has stepped up its production of fissile material, in conjunction with its nuclear submarine program.  This could give India the ability to produce more and larger weapons in a relatively short time frame. It is certainly within India’s means to vastly increase the size of its arsenal, and plans to construct four ballistic missile submarines (each carrying twelve missiles) almost certainly indicates an intention to expand.

India has long maintained 2/3rds of the nuclear triad, with aircraft-deliverable nuclear weapons and ballistic missiles. Several of India’s fighter-bomber types can deliver nuclear weapons from the air, and we can expect that future acquisitions (whether of the Rafale, the Su-30MMK, or the PAK-FA) will have similar capability.

(Recommended: 5 Most Lethal Navies on the Planet)

With the Prithvi and Agni families of weapons, India has a host of short and medium ballistic missiles that can carry nuclear weapons.

The newest element of India’s nuclear arsenal is the INS Arihant, a nuclear ballistic missile submarine currently undergoing trials. India’s first domestically built nuclear submarine, Arihant is the first of an expected four SSBNs, will carry twelve Sararika missiles, ranging from 500-1000 miles depending on payload.  While the sophistication of the submarines remains in some question, neither Pakistan nor China have plausible anti-submarine warfare capabilities for tracking or sinking the boats.

India faces two near term nuclear threats.  Against Pakistan, India has a huge conventional advantage, but has struggled to meet the irregular challenge.  Conversely, most analysts believe that China continues to have a significant military advantage over India, although India’s position along China’s primary energy supply route ameliorates this problem.

This places India in the unusual position of needing to deter a more powerful nuclear adversary, while intimidating a weaker opponent.  Pakistan’s apparent decision to press forward with a major nuclear weapons acquisition program, along with its long-term commitment to using jihadist groups to destabilize the border regions, make it difficult for India to formulate a cogent response. Because of the stability-instability paradox, nuclear parity benefits Pakistan, allowing the smaller state to undertake risky moves without fear of escalation. At the same time, however, a larger Indian nuclear program could incur a reaction from China, which has long been satisfied with a moderate deterrent arsenal.

Finally, while India does not at this time envision serious conflict with either Russia or the United States, the nuclear weapons capability effectively insures India against great power intervention in its region, or its wars. The contribution of nuclear weapons to national prestige may be waning, although this was important to India at earlier points in the program.

Pakistan seems to have determined to rely on nuclear weapons for external defense, conventional military forces for internal integrity, and jihadist terror groups for the pursuit of foreign security policy. If Pakistan continues to build up its nuclear forces, India will answer, and as India’s answer brings New Delhi’s arsenal within range of China’s, Beijing may respond with its own buildup.

- Ballistic missiles with longer ranges, MIRV capability, and the potential for maneuverable re-entry.

- SSBNs with longer range missiles, effectively out of the reach of either Chinese or Pakistani anti-submarine systems.

While the strategic nuclear relationship between the United States and Russia has achieved a rough (if increasingly hostile) stability, the China-India-Pakistan triad remains much more fluid, and far more dangerous. Asymmetric nuclear competition between Pakistan and India may generate a potentially more dangerous relationship between India and China. Given the paranoia of Pakistan military leadership, it’s hard to see any side exercising unilateral strategic restraint.  At the same time, prospects for multilateral arms control between the three powers look grim.

Robert Farley is an assistant professor at the Patterson School of Diplomacy and International Commerce. His work includes military doctrine, national security, and maritime affairs. He blogs at Lawyers, Guns and MoneyandInformation Dissemination and The Diplomat. Follow him on Twitter:@drfarls.