India's Modi Is Playing the Wrong Game against China and Pakistan 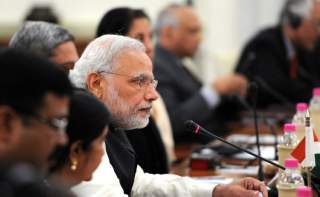 In his Independence Day address on Monday, Indian prime minister Narendra Modi went on the offensive vis-à-vis neighboring Pakistan, suggesting that India could overtly support separatist groups in the Pakistani province of Balochistan and cause trouble in the regions of Azad Jammu and Kashmir and Gilgit-Baltistan, claimed by India.

Modi’s salvo at Pakistan was driven by two main motivations: one, to deflect pressure on his government for the ongoing crisis in Indian-controlled Kashmir; and two, to project India as a regional hegemon capable of denying China access to economic trade routes through Pakistan into the Indian Ocean region. On both efforts, despite Modi’s braggadocio, India is likely to fail.

An estimated fifty thousand people attended Wani’s funeral in the Muslim-majority Kashmir Valley controlled by India—a testament to the popularity of the young man and local disdain for Indian security forces. The funeral was followed by protests, which included rock pelting. But the response by Indian security forces has been heavy-handed. Over fifty civilians have been killed, and many more have been maimed, blinded or covered with pockmarks by indiscriminate pellet-gun fire. For over forty days, Indian-controlled Kashmir has been under curfew, which began with the shutdown of local newspapers and internet access. They have since resumed, but phone and internet access continue to face restrictions. And though the region’s Chief Minister Mehbooba Mufti ordered the restoration of internet services, the police refused to implement her command, indicating that New Delhi is calling the shots.

Pakistan has offered strong diplomatic support to the Kashmiri protesters. The Indian prime minister has perhaps wagered that Pakistan can be dissuaded from its diplomatic offensive by more public pronouncements about Pakistan’s internal challenges. And he likely sees value in portraying the unrest as made not by his own hands, but by those of his neighbor and rival.

India has largely neutralized the Kashmiri insurgency. But rather than politically engaging popular separatist leaders, Modi prefers to arrest them—including eighty-six-year-old Syed Ali Geelani. And rather than engaging Pakistan on the issue of Kashmir, Modi has opted for a “defensive offensive” approach by vocalizing India’s support for separatist groups in Pakistan. But Pakistan has no hand in the Kashmir protests. They are an organic response to the abuse and injury of the local population by Indian security forces and New Delhi’s persistent attempts to whip them into submission. The Indian prime minister’s attempts to externalize the blame for the Kashmir crisis confirms to Kashmiri Muslims that Modi and his country’s hypernationalist commentariat covet their land, but not their hearts.

There is also a broader aim behind Modi’s Independence Day threat to Pakistan—and it has very much to do with India’s rivalry with China. Balochistan and Gilgit-Baltistan, two of the three regions in Pakistan mentioned by Modi in his address, are critical nodes along the China-Pakistan Economic Corridor (CPEC), a series of energy and infrastructure projects anchored by a road network that will connect China’s western Xinjiang region to the Arabian Sea port of Gwadar, located in Pakistani Balochistan along Persian Gulf shipping lanes and in the Indian Ocean region.

India has responded harshly since the formal launch of CPEC last spring. On the record, both Prime Minister Modi and External Affairs Minister Sushma Swaraj have expressed to Chinese counterparts their opposition to CPEC projects, because of projects that run through Gilgit-Baltistan. But, off the record, New Delhi has also indicated that its opposition to CPEC stems from its belief that an economically empowered Pakistan will be more strategically emboldened.

At the same time, private Indian news channels, at the behest of their own government, have been engaging in a crude propaganda campaign against CPEC. Indian media outlets issue false reports of a massive Chinese military presence in Gilgit-Baltistan. They also willfully misrepresent local political rallies as separatist protests. For example, the pro-Modi ANI news service recently used old video footage of an election rally by a Pakistani leftist party in Gilgit-Baltistan and falsely portrayed it as an anti-Pakistan separatist protest. Indian news channels also regularly feature activists and polemicists based in North America who claim to represent Balochistan and Gilgit-Baltistan and seem to spend half of the year in New Delhi and at meetings in Geneva.

Pakistan has also claimed that India offers covert support for militants in Balochistan. In the weeks after CPEC was formally launched, parts of Balochistan and Sindh province were the targets of small IED blasts claimed by militant groups possibly supported by India. More recently, a May 2016 attack on Chinese workers in Karachi was claimed by the Sindhudesh Liberation Army, which is allegedly supported by Indian intelligence.

This March, Pakistan announced the arrest of Kulbhushan Yadav, a current or former Indian naval officer who Islamabad claims is an Indian intelligence operative. Yadav, Pakistan alleges, operated out of neighboring Iran, using a false identity as an Indian Muslim businessman as a cover to engage Baloch separatists in Pakistan. In a purported confession video released by the Pakistan Army, Yadav states that he was “directing various activities in Balochistan and Karachi at the behest of RAW [India’s external spy agency].”

Curiously, India’s External Affairs Ministry recognized that Yadav served in the Indian Navy, though it claims that he retired some years ago. And a report in the Indian Express, while challenging the Pakistani government narrative, confirms that Yadav obtained a passport with the false name of Hussein Mubarak Patel in 2003, shortly before leaving for Chabahar in Iran’s Sistan-Baluchistan province, neighboring Pakistan.

New Delhi is misguided in its efforts to problematize CPEC. The on-the-ground reality along the CPEC route provides little opportunity for India to meaningfully impact the economic corridor’s progress.

In Gilgit-Baltistan, most political activism is aimed at deeper integration into the Pakistani federation. Locals desire provincial status for their region and the full rights of Pakistani citizenship for themselves. The region is not affluent, but literacy rates are high and there is little extreme poverty. Many locals join the Pakistani security forces. And the region, after a spate of sectarian violence, has been quite peaceful. In fact, in contrast to Indian-controlled Kashmir, Gilgit-Baltistan is far less militarized.

As for Balochistan, the worst of its insurgency appears to be part of the past. Since 2013, Baloch and Pashtun nationalist parties have been integrated into the informal provincial ruling coalition. At the same time, Baloch separatist groups have become increasingly divided, as is their historical tendency. Following the announcement of CPEC, some separatist leaders indicated that they could be open to talks with Islamabad. While Modi’s statement will probably encourage them to reverse course, the relevance of these actors, who are mainly based outside of Pakistan, seems to be waning.

CPEC has incentivized a broader segment of Baloch influentials to buy into the Pakistani political system—at least for the time being. If the local population materially benefits from CPEC—through jobs, the provision of basic services and improved infrastructure—Pakistan has a chance to bring a decisive end to the Balochistan insurgency. The opportunity is there; whether Islamabad has the sagacity to realize it is unclear. But the fate of CPEC is in the hands of Pakistan, not India.

With their false sense of confidence in India’s ability to project power in the region, Modi and much of India’s commentariat appear to be drinking their own Kool-Aid.

During the 2014 election campaign, Modi’s supporters described the future prime minister as a man with a “fifty-six-inch chest”—i.e., an Übermensch with a magical capability to strike fear in the hearts of India’s enemies and carry his country into superpower status. The phrase, in fact, come from Modi’s own description of himself.

In a bizarre display of narcissism, Modi, in his Independence Day address, claimed that the “people [of Azad Jammu and Kashmir, Balochistan, and Gilgit-Baltistan] thanked me a lot in the past few days” for supporting them. Modi sees himself as a savior, but the only acclaim for his statements has come from a few separatist leaders based abroad, likely already on his country’s payroll.

India’s television media seems to believe that much of Pakistan is on the verge of secession and New Delhi can tip the balance. But centrifugal forces in forces in Pakistan have eased, and terrorism in the country is at a decade low. After over ten years of continuous counterinsurgencies, Pakistani security forces are not fatigued; instead, they are more capable, equipped and resolute. India might be able to support small groups like the Balochistan Republican Army and Sindhudesh Liberation Army, but low-intensity attacks have failed to slow down CPEC progress. Dedicated road connectivity between Kashgar and Gwadar is expected to be completed by the end of this yea, and critical upgrades of the Karakoram Highway between Islamabad and Kashgar should significantly reduce travel time between the two points within three to four years.