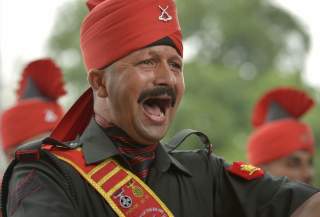 Consider the complexity of South Asia’s security dynamics: the other week India conducts a well-publicized commando assault on ethno-nationalist separatists sheltering in its eastern neighbor of Myanmar. But the deterrent signal the Indian government wants to send is really directed westward, at Pakistan and the religiously-inspired militants who have taken root there.

The Myanmar raid has sparked a lively debate inside India over Prime Minister Narendra Modi’s approach to national security and his more muscular posture on cross-border terrorism. But left unaddressed in the din is the most important question: Is the deterrent signal New Delhi wants Islamabad to absorb all that relevant to the gravest terrorist threats India faces from that direction?

The action in Myanmar is hardly the first time the Indian army has undertaken cross-border raids into neighboring countries. But consonant with the hard line Modi has adopted toward Pakistan, his government is trying to extract maximum deterrence value. Rajyavardhan Singh Rathore, a retired army colonel who now serves as India’s junior information minister, has been at the forefront of this effort. Immediately after the raid, he stated in a television interview that the strike “is undoubtedly a message to all nations that harbor any intentions—be it the west or the specific country we went into right now. Even if there are groups within countries that harbor terror intentions, we will choose the time and the place of hitting them.”

Speaking to the print media, Rathore elaborated that “We will not tolerate any strikes on India or Indians. We’ll always wield the initiative on either being friendly or engaging in aggressive action. We will strike at a place and at a time of our choosing.” He added that “This is a message for all countries, including Pakistan, and groups harboring terror intent towards India. A terrorist is a terrorist and has no other identity. We will strike when we want to.”

Although Rathore has been criticized for jingoistic boasting, the message he delivered was one the Modi government wanted to articulate.  Indeed, Minister of Defense Manohar Parrikar was beating the same drum. He declared that the commando mission signaled a decisive turn in how New Delhi responds to cross-border terrorism, adding in a gibe at Pakistan that “Those who fear India’s new posture have started reacting.” The Times of India reported that “the government made it clear that [the Myanmar action] was not a one-off operation but symbolized its decision not to be constrained by borders and to be preemptive in dealing with terror threats.”

The raid has generated a great deal of debate about the propriety of such chest-beating and its utility to the specific challenge of jihadi attacks emanating from Pakistani soil. Some criticize the Modi government for seeking domestic political gain while embarrassing the regime in Myanmar which clearly wants to keep its anti-militancy cooperation under wraps. Others question the wisdom of highlighting operational details about an instrument of state power that should properly remain in the shadows. And still others doubt whether a similar special-forces mission can even be undertaken against Pakistan-based targets.

Unexamined in the discussion, however, is the critical question of whether the deterrence signals India is transmitting are even applicable to the threats emanating from Pakistan. The bombastic attitude in New Delhi these days fails to differentiate between jihadi groups over which Pakistan has some control and uses to its own strategic purposes as opposed to the large number of outfits that operate in defiance of the Pakistani state and see triggering unintended conflict between New Delhi and Islamabad as a way to advance their own interests. This is a challenge that can be summed up as the “Sorcerer’s Apprentice problem,” from Goethe’s classic tale about the dangers of conjuring up proxies one cannot ultimately handle. And it is something that U.S. Defense Secretary Robert Gates warned about more than five years ago.

The premier example of this problem may be the near-war crisis between India and Pakistan following the brazen December 2001 jihadi attack on the Indian parliament. The possibility of nuclear weapons use appeared so ominous during the prolonged military standoff which ensued that in June 2002 Washington and London actually evacuated their embassies in New Delhi. Yet it is possible the attack was not sanctioned by the Pakistani leadership but rather was a jihadi effort to divert Pakistani military attention away from the Afghan border precisely when Osama bin Laden and hundreds of Al Qaeda and Taliban fighters were fleeing out of Afghanistan following the Taliban regime’s demise in late 2001. One expert on Pakistani terrorist groups underscores this possibility by noting that the significant signals traffic in the immediate aftermath of the parliament strike between Pakistan’s chief intelligence agency and the jihadis responsible for it indicates anger on the part of the Pakistani military leadership.

Likewise, the horrific November 2008 terrorist assault on Mumbai—carried out by the same jihadi outfit responsible for the parliament attack—may have been aimed at derailing the intensive back-channel peace negotiations that India and Pakistan undertook in 2004-2007, which reportedly came tantalizing close to fruition.

A series of similar examples have occurred over the past year. In September 2014, jihadi forces conducted an audacious seaborne assault upon a naval dockyard in Karachi, which Pakistani security forces were only able to beat back following a six-hour gunfight. According to a detailed statement by the newly-formed Al Qaeda in the Indian Subcontinent, the strike had a two-fold objective. One was to take control of a Pakistani frigate and “steer it toward the Indian waters in order to attack Indian warships with anti-ship missiles.” The other aim was to seize another frigate and use it to attack U.S. Navy vessels operating in the region. In December 2014, Pakistani authorities arrested the alleged chief of Al Qaeda’s regional branch, heading off a second planned attack on the Karachi naval dockyard.

A third example also occurred last November, when a suicide bomber struck at Pakistan’s main road border crossing with India. This was the deadliest terrorist attack in Pakistan in over a year, killing nearly 60 people, including three Pakistani paramilitary troops, and injuring well over 100. It occurred just inside Pakistani territory as the famous border-closing ceremony involving Indian and Pakistani guards was concluding at the end of the day.

A variety of jihadi outfits claimed responsibility. One of these, the Jundallah, a Pakistani Taliban offshoot, stated that the bombing was in retaliation for the major military assault the Pakistani army launched a year ago to clear anti-government militants from the North Waziristan tribal area, a notoriously lawless zone along the border with Afghanistan that is festooned with all sorts of jihadi groups. Although some details remain unclear, it’s possible that the bomber’s true objective was the infliction of mass casualties on the Indian side of the border. If such an event had occurred, already strained ties between New Delhi and Islamabad could have been pushed to the breaking point. As the eminent Pakistani journalist and terrorism expert Ahmed Rashid noted at the time: “Militant groups such as the [Pakistani] Taliban—which wants to topple the government in Islamabad—would like nothing better than a conflict between India and Pakistan to distract the army from north Waziristan. The easiest way to achieve this would be by planting bombs on the border, leading both governments to levy accusations of terrorism against each other.” Indian security officials reportedly reached a similar conclusion, with a media report quoting one as saying that “It appears the target of the bomber was India with collateral damages across the border, but he exploded due to some miscalculation."

Further underscoring this possibility are the statements issued by Jamaat-ul-Ahrar, a newly-formed Pakistani Taliban splinter group also claiming to be behind the bombing. Its spokesman tweeted that “This attack was a message to the governments on both sides of the border. If we can carry out an attack on this side, then we can attack the other side too.” He further warned that the group had set its sights on India and would avenge the deaths of Muslims in the disputed Kashmir region and in Gujarat, Prime Minister Modi’s home state. Following this threat, the Indian security services issued an unusual alert about a strike by Pakistan-based terrorists in the port city of Kolkata (Calcutta), causing the Indian navy in turn to hurriedly send two of its visiting warships to sea.

Last fall Reuters quoted an Indian security official as acknowledging that “It has been clear for some time that there is no [jihadi] group that is fully within [Pakistan’s] control. They are all itching for independent action, some want to have a go at us immediately.” Yet so far, Modi’s government shows no evidence of even recognizing the resulting deterrence conundrum. But the failure to do so could well lead to military conflict neither country intends.

David J. Karl is president of the Asia Strategy Initiative, an analysis and advisory firm, and heads its South Asia practice group.  He can be reached via Twitter @DavidJKarl.