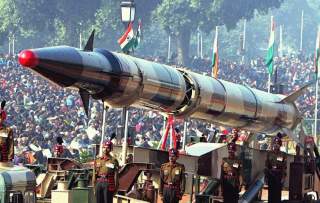 India is one of the world’s greatest emerging powers today. Its economy is growing rapidly and its military is one of the largest in the world, with over a million soldiers.

India sees its nuclear weapons capacity to be an integral part of its vision as a great power, and its nuclear program is important for both its prestige and security doctrine.

Since then however, sanctions have largely been lifted and the United States had quietly accepted India’s possession of nuclear weapons so long as India does not carry out further nuclear tests, though officially, the United States has not recognized India as a nuclear weapons state. This has also led to many claims of double standards on the part of the United States for making exceptions for India—including getting the Nuclear Suppliers Group to agree to a waiver on export restrictions of nuclear materials for India—that have been granted to no other countries. This demonstrates the strategic importance of India for the West and the general global perception of its trustworthiness and stability.

Here are five things you need to know about India’s interesting nuclear program.

Why did India build Nukes?

Indian nationalist leaders speculated about the possibility of acquiring nuclear weapons even before its independence. India’s first prime minister, Jawaharlal Nehru justified this by arguing: “As long as the world is constituted as it is, every country will have to devise and use the latest devices for its protection. I have no doubt India will develop her scientific researches and I hope Indian scientists will use the atomic force for constructive purposes. But if India is threatened, she will inevitably try to defend herself by all means at her disposal.”

The main impetus for India going nuclear, however, was China, which tested a nuclear weapon in 1964. Two years prior, China defeated India in a short but decisive border conflict and relations between the two countries were subsequently tense. Taken together, Indian leaders felt that India needed nuclear weapons to counter China’s conventional superiority and defend Indian territory, some of which China was perceived to have occupied.

Nonetheless, India and China both have nuclear no-first use doctrines and it is highly unlikely that either would risk nuclear war over a non-existential border dispute. This raises the question of why India felt it needed a nuclear weapon to counter China, a luxury many other countries with disputed borders with China forewent. Yet, India’s nuclear program was not just about countering China, but being equal to it, since Indian leaders believed that India and China were both destined to be the leaders of Asia.

Today, India’s nuclear weapons are also important as a deterrent toward Pakistan, though it developed them first and Pakistan only later developed its weapons in response. However, given Pakistan’s military stance and weapons, India’s continued possession of weapons is necessary for its security vis-à-vis its western neighbor.

Nuclear research in India first began at the Institute of Fundamental Research (IFR) from 1944 onward, and even prior to then, Indians had access to some Western scientific journals, the result being that India was theoretically more ahead on the path to a nuclear weapon that most other developing countries at the time. In addition to enriching plutonium and uranium, a unique component of India’s nuclear activity has been thorium, as India contains twenty-five percent of the world’s thorium deposits. Thorium is not ideal for weapons, but its use for civilian power could free up virtually all of India’s uranium and plutonium for military uses.

After India’s defeat by China in 1962, India moved toward the construction of a nuclear weapon and design work began in 1965 under Dr. Homi Bhabha. Development accelerated under Prime Minister Indira Gandhi, who both wanted to accentuate her popularity and due to fears of Chinese or American involvement in India’s 1971 war with Pakistan.

In 1974, India detonated its first plutonium device, although it characterized it as a “peaceful nuclear explosive.” Because of this characterization, India was able to avoid the worst of criticism directed against it for alleged developing a nuclear weapon, though independent observers maintained that it was part of a nuclear weapons program and Indian scientists privately admitted as much.

After 1974, India continued to develop and improve upon its nuclear weapons, experimenting with different types of designs and materials. India officially went nuclear in 1998, conducting five nuclear tests (one fusion bomb, four fission bombs), a move met with high domestic approval. Pakistan responded with its own nuclear tests, bringing South Asia’s nuclear-armed reality into the open.

While much criticism has been levied against the dangers of the Pakistani nuclear weapons program, a valid debate can also be had over whether the Indian nuclear weapons program actually improved or hurt security and stability in South Asia. This point was debated right here on The National Interest back in 2013 in a series of articles by Zachary Keck and Dhruva Jaishankar.

Keck argues “Indian leaders built the bomb with a very specific security threat in mind. Unfortunately, nuclear weapons have proven ill-suited for addressing that security threat, while India’s pursuit of atomic weaponry has opened up new challenges that wouldn’t have existed otherwise.” In his view, China’s limited objectives toward its dispute with India did not necessitate India getting a bomb in order to improve its own security, as nuclear weapons are only useful as deterrents against large-scale attacks. On the other hand, Pakistan developed nuclear weapons, a fact that undermined India’s own security vis-à-vis to its prior position.

Jaishankar counters that China’s objectives are more expansive than its seemingly limited border dispute with India and that China had in fact been giving Pakistan aid to go nuclear long before India’s 1998 test in a bid to contain India.

In fact, according to Jaishankar, China conducted a test for Pakistan in 1990, effectively making it a nuclear state. Combined with Pakistan’s prior incursions into India, India’s development of a nuclear weapon was an apt response for Chinese and Pakistani adventurism. In a response, however, Keck points out that Pakistan continued to use proxies after India’s acquisition of a nuke and that China seized some 640 kilometers of Indian territory.

The debate over whether or not India’s acquisition of nuclear materials improved its security situation continues to remain unresolved.

India has around 110 nuclear weapons, which is actually slightly less than how many Pakistan has (120). This is consistent with the amount of weapons-grade plutonium it has previously produced.

India, along with China, the United States, and Russia, possesses a full nuclear triad consisting of extensive air, sea, and land capabilities. India maintains multiple nuclear capable aircraft, including the Sukhoi Su-30MKI, the Mikoyan MiG-29, and the Dassault Mirage 2000, among others. India also operates nuclear submarines and has recently produced the indigenous INS Arihant. However, India’s submarine-launched ballistic missiles (SLBMs) have limited range, and Indian submarines would therefore have to creep fairly close to Chinese shores before they would be able to deliver a nuclear weapon to the mainland.

The Indian missile arsenal is large and will soon include an intercontinental ballistic missile (ICBM). In fact, earlier this India successfully tested its Agni-V for the third time. Although the Agni-V has a range of 5,000 kilometers, and is therefore technically only an intermediate-range ballistic missile (IRBM), it is frequently referred to an ICBM in Indian media. In any case, its range could be extended in later variants, and it is already able to reach all of China. India is also developing the Agni-VI, which may have a range of up to 10,000 kilometers.

While India is ahead of Pakistan in terms of the range of its weapons and its delivery systems, its program is mostly geared towards the nuclear threat of China rather than Pakistan. Pakistan has more smartly tailored its nuclear program to the geographical and logistical characteristics of South Asian warfare by focusing on battlefield nukes, something India has not done. However, India’s nuclear strategy does not necessarily need battlefield nukes, because of its no-first use policy; if a battlefield nuke were to be used on India, India would retaliate much more massively with regular nukes.

India is expanding its stock of nuclear weapons, but not as fast as Pakistan is, since India’s has met the minimum needed for deterrent purposes while Pakistan may intend to use its nuclear weapons for offensive or battlefield purposes. India’s industrial base also enables it to build more and different types of nuclear weapons at shorter notice than Pakistan so it does not necessarily need to redirect its energies to building more weapons unless it feels them necessary.