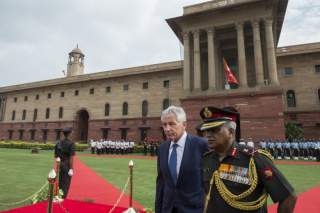 In August, the Indian Ministry of Defense approved the $2.5 billion purchase of 22 Boeing AH-64E Apache attack helicopters and 15 CH-47F Chinook heavy lift helicopters. The sale still has one last hurdle—Indian Cabinet approval—but if completed it will be the latest example of a major shift in U.S.-Indo relations that in the past three years have seen Washington become India’s top defense equipment supplier.

The approval of the Apache and Chinook deals comes about a month after Defense Secretary Chuck Hagel arrived in Delhi promising the El Dorado of defense deals: joint development and local manufacture of top-end U.S. kit.

The deal consisted of joint development of a new version of the Javelin antitank missile and the promise of access to electromagnetic catapult technology for India’s next generation of aircraft carriers.

"We can do more to forge a defense industrial partnership—one that would transform our nations' defense cooperation from simply buying and selling to co-production, co-development, and freer exchange of technology," Hagel said in a speech at the Observer Research Foundation in Delhi. Referring specifically to the possibility of Javelin co-development, Hagel said: "This is an unprecedented offer that we have made only to India."

So goes the sales pitch. The interesting thing about it is that so far, U.S.-Indo defense deals have followed the tried-and-tested Foreign Military Sales (FMS) route: a government-to-government procedure that avoids negotiating pitfalls and potential corruption. It also limits the extent to which the buyer can add any sweeteners, such as the transfer of technology or local assembly options that are key to modern defense deals between developed and developing countries.

Despite this reticence on Washington’s part, its push into the Indian market has been very successful. According to IHS Jane’s data, in 2009 India imported only $200 million in military equipment from the US; by 2013 that had jumped to $2 billion.

This means that since 2011, the United States has supplanted Russia as New Delhi’s primary supplier of defense materiel. It is possible to argue that the United States has grasped at low-hanging fruit (and that year-by-year defense-sales numbers can be misleading as they capture big-ticket transactions, rather than long-term trends). That said, the numbers involved shouldn’t be sniffed at: Washington has offered field-tested, battle-proven aircraft (Apache, Chinook, C-130 Hercules, C-17 Globemaster) and top-end new platforms (such as the Boeing P-8I Poseidon maritime patrol aircraft) that fit local requirements and that the cash-rich Indian armed forces can afford to purchase.

It hasn’t all gone the United States’ way: Russia may have dropped out of first place in dollar terms, but its contribution to Indian military capabilities is comprehensive and unsurpassed across all three services. Meanwhile, countries such as France, the UK, Israel and even defense-export newcomer Japan are looking to expand defense ties with New Delhi, which they expect will remain a significant player on the international market for the foreseeable future.

The U.S. response to this situation—Hagel’s offer of joint development and systems such as the Electro Magnetic Aircraft Launch System (EMALS) for aircraft carriers that aren’t even in U.S. service yet—says a lot about the state of the global defense industry and India’s position within it.

Simply put, India is the largest ‘open’ defense market in the world, accounting for nearly 10 percent of the $63 billion international defense market in 2013. It is ‘open’ because the other major markets, such as the United States, Europe, China or Russia, tend to buy local when they can. By contrast, India’s indigenous defense industry has singularly failed to keep up with local demand, forcing the MoD to look abroad to modernize its forces.

A look at the shopping list for U.S. kit gives a reasonably straightforward view of India’s strategic priorities. C-17s, C-130s, Apaches and Chinooks allow it to resupply and reinforce forces on the Pakistani and Chinese borders, the latter, a focus of new procurements due to army plans to establish a mountain corps. This plan was also the driving force behind talks (now on hold) to buy the U.S. Marine Corps’ BAE Systems M777 howitzer , which was preferred because it could be slung under a Chinook and moved up to the border quickly.

At sea, the Indian Navy wants aircraft carriers (potentially fitted with EMALS), P-8 maritime patrol aircraft and UAVs, because it is worried about China’s intentions in the Indian Ocean region. That is not to say that the United States is the only show in town; India also has a new(ish) Russian aircraft carrier, technical assistance from Moscow for a nuclear-powered and nuclear-armed missile submarine, and all kinds of Israeli and Russian kit on its new Kolkata-class guided-missile destroyers.

Meanwhile, the air force is happy to buy fighters from France (Dassault’s Rafale fighter beat Boeing’s F/A-18 and Lockheed Martin’s F-16 to be shortlisted for a 128-plane requirement) or Russia (such as the PAK-FA—Moscow’s stealth fighter); and although the Chinook and Apache both beat Russian competitors for their requirements, the workhorse Mi-17 ‘Hip’ is an Indian stalwart and French helicopter engineers have played a major role in helping India’s homegrown Dhruv platform off the ground.

Delhi’s preference for kit from multiple sources has its risks: interoperability, resupply and logistics can be an issue (especially in areas like small arms and artillery ammunition), while maintaining partnerships with multiple countries can be a tough juggling act. After-sales support is another challenge: some countries have dismal reputations for servicing and spares, so even if the platform is best in class, it might become a “hangar queen” due to poor maintenance.

That said, there is no doubt of the huge geopolitical benefits of diversifying military suppliers for the buying country. In India’s case, one has to look no further than the symbolic role that the ShinMaywa US-2i amphibious plane is playing in its “special strategic relationship” with Japan. Another example is Russia, which remains a key partner for Delhi, because it is helping to build nuclear submarines, supersonic cruise missiles and other strategic systems.

This diversification means that although the United States is eager to cozy up to India, Delhi has plenty of other options if it so chooses. The relationship is also complicated by Indian memories of U.S. sanctions after the 1998 nuclear test, along with Washington’s long-standing military support for Pakistan.

We Need to Talk about China

The big question is what the United States seeks in return for its military technology transfer—and what India gets from closer ties with the United States. The answer to both of these questions could be linked to the elephant in the room—or perhaps the dragon with the shared driveway.

As we’ve seen, India is using acquisitions from the United States and its allies to reinforce its position in the Indian Ocean region. Meanwhile, under its ‘Look East’ policy, Delhi is building alliances with China’s east Asian neighbors such as Japan and Vietnam. U.S. rhetorical appeals to India regularly emphasize the areas of commonality that differentiate the two countries from China, such as democracy, freedom of navigation and respect for international norms.

Within India, some suspicion remains that the United States wants to draw India into some kind of anti-China containment strategy, a move that would end Delhi’s cherished nonalignment. Other Indian analysts argue that if Asia is going bipolar, then the United States is the natural country to side with, given Beijing’s “all-weather friendship” with Islamabad and the ongoing territorial dispute in eastern Jammu and Kashmir and Arunachal Pradesh, which China calls South Tibet.

Either way, the relationship deserves monitoring. U.S. interest in India appears to be sincere, but may not survive having to work with local state-owned defense primes, which suffer from a terrible reputation for bureaucracy and high-handedness. However, if Washington—and its defense companies—can find like-minded India partners, then this could be the start of something big.