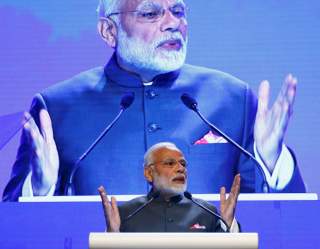 New Delhi needs to understand the strength it possesses and begin acting like a world power. India isn’t a member of the UN Security Council or the G-7. That needs to change. One way India can achieve that goal is if the Modi government and diplomatic corps press for a larger role in world affairs to balance China and Pakistan. China, in particular, “has increasingly asserted its regional posture,” which is a threat to India and upsets the balance of power in Southeast Asia and Central Asia. Also, India should shed its emerging power title and become a “major global player.”

India has resources and strength it doesn’t seem to understand. It currently has “the world’s third-largest military personnel, fifth-largest defense budget, and seventh-largest economy.” Furthermore, in the not-so-distant-future, India will overtake China and have the largest population in the world—that is young, intelligent and motivated to shed religious and caste systems—which have held the country back from advancing upwards for decades.

But daunting obstacles to overcome have hindered India’s growth and allowed the country’s ambitions to be put on the backburner of geopolitical influence and stability for the region. Over 270 million Indian’s live in crippling poverty. Infrastructure needs keep India at third-world status according to India’s finance minister by stating, “$1.5 trillion of major investments (infrastructure) are needed in the next decade.” Still, discrimination between India’s complicated social structure and diverse population that perpetuates hate based on “gender, caste, religion, or region” is a deep hindrance to overcome. Until the Modi government solves the duel issues of hate and discrimination in its societal structure, India will continue muddling in the trenches of irrelevancy rather than spend its time becoming a country that is ready to shape global agendas.

Former prime minister Manmohan Singh long chafed at the fact that the world never saw India as a world power and Prime Minister Modi has been asserting that India’s place in the world is that of a “leading power because of its size and being the largest democracy in the world.” However, India covets a seat on the UN Security Council that growing rival China occupies. Singh led the charge for that seat when he pushed for India’s “due place in global councils.” Modi’s power over India has allowed him to promote their interests into “laying overt claim to a new, more central place in the world.” India’s growing military clout, economic prowess and focus on warm relations with countries like the United States and Iran means Singh and now Modi are correct asserting their emerging status.

India’s long-overdue status as a player on the international stage coincides with warmer relations with the United States. Former diplomat and historian Dennis Kux described the pre-existing relationship as “estranged democracies,” but now each country speaks of “a strategic partnership,” and this cooperation aids India in leaving “behind some of its old defensiveness on the world stage, a vestige of its nonaligned worldview.” President Trump remarked in June 2017 that the Indian-American partnership, “never looked brighter.” Trump also “asked India to do more on economic development in Afghanistan.” A drastic change from his predecessors, Presidents George W. Bush and Barack Obama, who never explicitly asked for this level of help with Afghanistan. Trump’s request elevated India’s status in Central Asia.

One of the largest overhauls India needs to begin its journey towards becoming a world power is by making its country easier to diplomatically deal with, which will further enable it to join formal alliances. India has always been fiercely independent, and it is known to break formal trade negotiations and agreements to suit its policy needs. This behavior has hampered its ability to forge trade agreements with the United States and other nations eager to build military and trade alliances with India. While New Delhi wants closer trade and economic ties along with a defense partner, it will need to open market access in keeping with the U.S.-led order that India has shunned for decades. This access will allow India to forge tighter relationships with Japan, South Korea, and other Asian nations betting on prosperity and stability within India’s sphere of influence.

According to a 2016 CEO survey conducted by global consulting and accounting firm KPMG found India to be its top growth opportunity for the next three years. India’s economy has a GDP of over $2 trillion at current exchange rates, surpassing Canada and Italy. Moreover, U.S. government projections backed by Bank of America forecasts India to be the third-largest economy in the world by 2029. India has already overtaken Brazil and Russia through purchasing power parity measured by the International Monetary Fund. This blossoming economic powerhouse illustrates the power and prosperity that India will continue to grab onto this decade and beyond.

Multinational firms like Apple, Bosch and Whirlpool now manufacture goods in India because of its growing middle class that is estimated between 30–270 million, according to Deutsche Bank Research and the National Council on Applied Economic Research (data is quoted by Center for Global Development). McKinsey Global Institute has even called India “A Bird of Gold” because of its middle class, which is expected to grow to over six hundred million people by 2025. Now, India has begun seeing itself as “a leading power,” is one of the reasons Ford, Suzuki and Tata are building more cars in India than Mexico and slightly below South Korea—while becoming the largest market for motorcycles and scooters in 2016—overtaking China. A generation ago, India’s advanced automotive industry was just a pipedream.

New Delhi’s newfound power will take primacy in two areas: its nuclear weapons program and the Indian Ocean. There are positive and negatives coinciding with India’s military taking a larger global role. The International Institute for Strategic Studies (ISS) counts India’s strengths with having 1.4 million troops on active duty and roughly 1.2 million reservists. Further military growth was calculated by The Stockholm International Peace Research Institute (SIPRI), “estimated India became the world’s fifth-largest military spender in 2016, ahead of France and the United Kingdom.” U.S. military procurement has exceeded $15 billion in the past decade, which started under the Bush and Obama administrations. However, India’s Controller and Auditor General (CAG) raised major concerns in a report to parliament that questioned the country’s military preparedness and capacity for mobilization across all branches of the armed forces.

India is in a dangerous part of the world. It is wedged between Pakistan and China, which seem to want to witness the country’s demise or its subservience to Chinese ambitions. By diversifying its partners and investing in strategic hedging that asserts its place as the largest democracy in the world, India can finally leave the dredges of third-world status and share Modi and Singh’s conviction that “(India’s) time has come.” Hopefully that prediction is true. After all, the western ambitions that India has for balancing Iran and China’s influence in the region will only happen if India continues to grow socially, economically and militarily. The UN, NATO, the EU and most of the United States should do everything possible to influence that outcome.