Indonesia Is Ready to Lead the Fight Against Climate Change 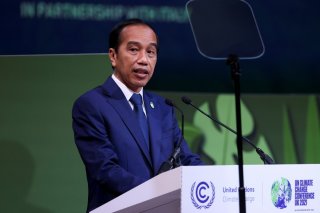 Few countries take the threat of climate change as seriously as Indonesia. The fourth most-populous country on the planet has over 94 million hectares of forest—over half of the country’s total landmass—that supports extraordinary biodiversity and, in turn, the livelihoods of tens of millions of people. A significant proportion of Indonesia’s 274 million people live in areas of high density that are particularly vulnerable to the effects of climate change, from low-lying coastlines to lush forests. Indonesia’s bounty of natural resources is a significant strength but also puts it at elevated risk.

Indonesia’s status as a high-risk country is already evident with almost all projections for the next century indicating a sharp temperature rise, ranging anywhere from 0.7 Celsius to 3.9 Celcius. Low-lying coastal areas, including where the current capital Jakarta lies, are under threat from even mild floods. The number of people exposed to flood risk could increase by as much as 1.4 million by 2050. By the end of the century, over 4.2 million people could be displaced by permanent flooding.

The rainfall season, symbolic of Indonesia’s tropical climate, which lasts from December to March, will be drastically affected in various ways. A truncated rainfall season and extended dry periods will be devastating for crop production and the undulating rice fields of Java. In low-lying areas, floods and landslides will be a natural consequence of erratic and intense rain, such as the floods that displaced over 30,000 people in Sumatra in late 2021. For a country with such a significant seasonal dependence on rainfall, this volatility is increasingly becoming a fact of life.

The global focus on Indonesia and climate change have shown that the country itself is also a significant emitter of greenhouse gasses. Indonesia’s emissions are driven by deforestation and other land-use changes that consume two million hectares per year. Jakarta is, by dint of its location, vulnerable to frequent seasonal flooding with four particularly disastrous floods occurring in the last fifteen years.

International recognition of Indonesia’s unique and precarious position has led to a robust government response, particularly since the election of President Joko Widodo, popularly known as Jokowi, in 2014. The former governor of Jakarta pledged to improve national infrastructure and has taken steps to tackle climate change readiness. He was one of 100 world leaders at the COP26 climate summit in Scotland to sign a deal to end and reverse deforestation by 2030.

Since COP26, Widodo has made further commitments to the development of a green economy. In his state address at the annual session of the People’s Consultative Assembly in August 2022, he highlighted a number of long-term nature-based solutions to climate change such as developing plant nurseries and rehabilitating natural habitats, recognizing the importance of natural ecosystems in absorbing carbon.

Indonesia is one of the world’s great manufacturing nations and Widodo’s administration is seeking to ride the wave of developing and producing low-emission products. There are plans to build the world’s largest green industrial park, utilizing hydroelectric power, in the province of North Kalimantan. There is also a roadmap for the energy transition, with the government setting a target of achieving 31 percent renewable energy by 2050 and a 29 percent reduction in emissions by 2030. With international financial support, the government can raise this target to 41 percent.

Indonesia is blessed with enormous renewable energy potential, including up to ninety-five gigawatts of hydroelectric power and twenty-nine gigawatts of geothermal energy. Solar is also developing fast. Indonesia intends to bring about change at each stage of the value chain, from upstream (energy production and extraction) to downstream (domestic and industrial energy use). Its leaders recognize that there is an opportunity for the country to be a leading nation in this fight, especially within Southeast Asia.

Indonesia is also working hard to develop the green financial infrastructure needed to support this transition. Widodo launched a new green investment taxonomy in January this year. A traffic light system projects the impact on climate and the wider environment with the aim of channeling investment to green projects. Green bonds and sukuks (Shariah-compliant bonds) are being experimented with. And a carbon tax will soon be introduced, dependent on the ongoing energy crisis.

This opportunity is not without risk. Indonesia’s hosting of the upcoming G20 summit in November represents an inflection point. The government is willingly placing itself under the microscope, with the leaders of the world’s largest economies and associated press outlets descending on Bali.

Since receiving the mantle of the G20 presidency two years ago, Indonesia’s agenda has emphasized strength and sustainability, and one of its three main pillars is “Achieving a global deal to accelerate the energy transition.” Understanding the challenges and need for collective action, Indonesia will focus on three main pillars for its G20 2022 Presidency, namely: Global Health Architecture, Sustainable Energy Transition, and Digital Transformation.

To ensure a successful summit, Indonesia’s climate change plans must stand up to global scrutiny and actively set an example of environmental sustainability and economic success for other resource-rich manufacturing nations to follow.

Arsjad Rasjid is the Chairman of the Indonesian Chamber of Commerce and Industry (KADIN) and President Director of Indika Energy.