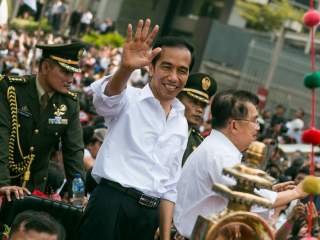 By most measures, Indonesia is among the world’s largest countries. It's the largest archipelagic country, the third largest democracy, the largest Muslim nation and the eighth largest economy. What’s more, over the last half century, its economic performance has been among the best in Asia, and its economy has proved resilient to shocks.

Yet it is somewhat of a conundrum that Indonesia’s economic performance and internal resilience have not been matched by increasing impact in regional and global affairs. Why is this the case? The answer is that Indonesia has been unwilling—and unable—to use its strategic location and economic heft to project power regionally and globally.

Indonesia has been unwilling to project power internationally because it has been well served by the current regional and global order and has seen no reason to make any fundamental change to the status quo. Since its confrontation with Malaysia in the 1960s, Indonesia has faced no existential external threat that warranted international attention or support. Its geographic location, together with its low-profile and pragmatic foreign policy, has minimized frictions with both its neighbors and its major trading partners. The country’s geography makes land invasion unlikely, and Indonesia’s few disputes over maritime borders have been settled peacefully.

Over the next quarter century, however, these dynamics are likely to change, shaped by global megatrends that will affect all countries. The power of markets and information technologies, for example, will continue to drive the pace of globalization, accentuating volatility and bringing contagion risks that the current global order seems unable to contain. Climate change could cause extreme weather events and rising sea levels, posing significant risks to countries like Indonesia that are located in vulnerable regions and have extensive low-lying coastlines. The growth of international terrorism―brought home recently by the terrorist incident in the heart of Jakarta―has raised new security concerns. The rise of China and other emerging markets—including Indonesia—are already transforming the global balance of power and are likely to trigger unexpected international dynamics that will create new opportunities for global prosperity and, at the same time, pose new challenges to the existing economic and security order underwritten by the United States.

These megatrends are already changing Indonesia’s threat perception significantly. From a regional and global perspective, perhaps the most important has been recent developments in the South China Sea. The Indonesian military has raised concerns about the implications of China’s nine-dashed line for Indonesia’s claim to its exclusive economic zone near the Natuna Islands, which hold large reserves of natural gas.

Unfortunately the country’s foundations of national power—its resource base, economic performance and military capabilities—render it unable to meet these new threats and project power abroad to advance its long-term strategic interests. For the foreseeable future, Indonesia will remain a country that will punch well below its weight in international affairs.

Three reasons account for this limitation. The first is Indonesia’s narrow human resource base and its relatively weak technological capability. Businesses report that managerial and worker skills are among the most prominent constraints to future development. Indonesia ranks 112 out of 187 countries in the UNDP’s education index and fifty-six out of sixty-five countries on its scores in the Program for International Student Assessment (PISA). Indeed, despite a rapid expansion in university education, not one of Indonesia’s universities ranks in the top 500 in the world.

The country’s weak technological capability results from spending only 0.2 percent of GDP on research and development, the lowest among the G20. It ranks 108 out of 146 countries in the World Bank’s knowledge economy index. But even this would not have been a handicap if the economy were open to trade and foreign investment, which offer opportunities to import technology from abroad. Jakarta’s tendency toward protective trade and investment policies is narrowing even this avenue of technology acquisition.

In addition, Indonesia’s ability to respond forcefully to new external threats has been weakened by a fractured political elite and the depletion of ideational resources and instruments. A young democracy, it has still not found the right balance between giving electoral voice to its people and ensuring the elected government can mobilize collective action to pursue national and strategic interests. Indonesia has yet to find equilibrium between the power of central and local governments; the president and parliament; elected officials and big business; civil society and military organizations; and religious and secular forces. At the same time, the country lacks a powerful ideational framework that can unite the nation behind a common goal. President Joko Widodo’s emphasis on a maritime axis, infrastructure development, foreign investment and a new international economic architecture appear as unconnected dots in need of a framework.

Finally, Indonesia’s ability to respond to the changing threat matrix has been hampered by a military-industrial complex in dire need of reform. In the past, the military was focused almost exclusively on internal threats and essentially became an instrument for maintaining political power through domestic surveillance and counterinsurgency. The absence of external threats meant the military budget never exceeded 1 percent of GDP, the lowest among Asian nations. Driven, in part, by China’s seemingly aggressive use of the nine-dashed line to lay claim to large parts of the South China Sea, Indonesia’s military has embarked on a strategic shift from internal order to external defense and deterrence. Similar efforts are being made to reform Indonesia’s three state-owned defense industries (each linked to the army, navy and air force, respectively), which have been in parlous financial condition with serious shortages of skills and technological know-how.

These three shortcomings—a large skills deficit and weak technological capability, a fractured elite with no common ideational framework and a military-industrial complex in need of reform—will take decades to resolve. In the meantime, Indonesia will remain an Asian giant unwilling and, perhaps, unable to project power globally, and even regionally, in pursuit of its national strategic interests.

Vikram Nehru is senior associate and Bakrie chair in Southeast Asian studies at the Carnegie Endowment for International Peace. This piece is based on a chapter for the National Bureau of Asian Research’s most recent volume Strategic Asia 2015-2016: Foundations of National Power in the Asia-Pacific.