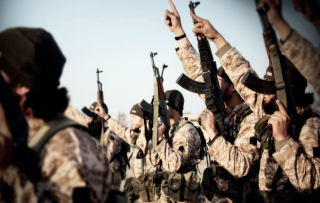 The worry mongering over ISIS can’t gloss over a telling fact: ISIS foes are defeating the terrorist group in major battles.

In Kobani, ISIS members died by the thousands. A coalition of Shia militias, Iraqi government forces and anti-ISIS Sunni tribesman are making progress towards ejecting ISIS from Tikrit. What’s needed now is to capitalize on those defeats and complement kinetic action with a cohesive information war campaign driven by a powerful, credible narrative that demoralizes, divides, confuses, and frustrates ISIS members in order to blunt their effectiveness as fighters, and undermine their expectations, destroy their momentum, and quash any hope of victory in creating a sustainable Islamic State or caliphate.

Messages that should drive that campaign include three key points. First, the defeat of ISIS is inevitable. That would provide a counter-narrative that blunts and discredits the ISIS propaganda terror strategy whose themes are that its members are fearsome warriors, resistance to ISIS domination means death, and that ISIS victory is inevitable. That mindset has permeated the atrocity pornography that ISIS has touted over social media. It has proven crucial to suppressing opposition and winning converts to its cause.

The size of ISIS forces remain unclear. Estimates range between 18,000 and 31,000 individuals. ISIS does not publicize its losses. A late January Pentagon estimate put the number that ISIS had lost at over 6,000 men, including half its top command. General Lloyd Austin now puts the number at 8,500. ISIS is recruiting a thousand new fighters a month but losses that steep hurt.

In a strategic blunder, ISIS chose to stand and fight at Kobani, near Turkey’s border. At first, pundits predicted that the Kurdish defenders—including hundreds of female fighters—were doomed. Instead U.S. airstrikes and Kurdish fortitude turned the battle into a killing field that cost ISIS thousands of valuable fighters. The loss deprived the terrorist group of momentum and showed it could be beaten.

Recruits have signed up with ISIS for different reasons. As Michael Weiss and Hassan Hassan have keenly observed, these include missionary zeal, the theology of a “purified” Islam, money, hostility to Shiites, talk of justice, and its pan-Sunni philosophy.

But the one thing that binds and drives them has been the conviction that they would succeed. An information strategy would need to obliterate that belief, replacing a sense of inevitable victory with one of inevitable defeat. Success for ISIS requires more than winning battles. It requires seizing and holding territory. If that goal collapses, the dream of establishing a state and a caliphate falls, eviscerating expectations and ISIS’s core rationale for its cause.

Second, an information strategy must exploit the inherent tensions that exist among a terrorist group comprised of actors from many different countries and cultures. The mixture is combustible and renders ISIS politically unstable. An obvious tension point to divide and demoralize is to mock and belittle the better treatment accorded foreign fighters over local ones. Foreigners have received apartments, higher salaries, cars, and the safety of being based in cities, while local fighters have been dispatched to front lines. These are sensitive points that can trigger anger, hostility, and division, and undermine unity and the credibility of leadership.

Third, belittling the image of ISIS members as fearsome warriors by branding them as incompetent cowards. They initially seized Raqqa, Syria amid weak resistance. The group rampaged through Iraq as a heavily politicized Iraqi army threw down its arms, despite possessing overwhelming numbers and superior equipment, and fled. Indeed, militants slaughtered perhaps 1,700 soldiers—mostly Shiites—from Camp Speicher, a former U.S. military base outside Tikrit.

For a period, pundits muttered that Baghdad itself might fall. Kobani and initial successes at Tikrit have restored reality to that picture. Far from being brilliantly led, ISIS is now confronted by adversaries that will stand and fight, and carry the battle to ISIS. One can argue that ISIS is not well led and that while foot soldiers die, its leadership hides in safety. We can exploit that behavior to discredit, divide, and demoralize.

No formula governs how this information war campaign should be devised and executed. In my view, it ought to be led by regional neighbors, not the United States or the West. One element of the information war ought to widely mock and belittle ISIS and its members with biting humor and satire by people like Egypt’s Bassem Youssef, who now resides in Boston. Satire is a well-entrenched feature of Arab media. Humor may not be the only tool to use against ISIS, but as a symbol of depraved tyranny and authority, it’s an ideal target for it. Regional neighbors should recruit other satirists to help win this information war.

The campaign should also press regional neighbors to mobilize Islamic scholars to follow King Abdullah’s lead and label ISIS “Khawarij,” declare its leader Abu Bakr al-Baghdadi a false Caliph, and declare ISIS members apostates and the act of joining ISIS, apostasy. Such testing would be especially valuable in reframing the conflict away from ISIS’s view that it is Islam versus Christianity conflict to one of medievalism versus modernism.

Evil cannot be defeated. It must be eradicated. Kinetic operations offer one key aspect of achieving that goal. But information warfare is equally essential in dealing with ISIS. The United States and its allies have yet to forge and execute a viable strategy—led by regional players, not the United States—for one against this implacable enemy. The sooner, the better.

James P. Farwell is a national security expert who has advised the U.S. SPECIAL OPERATIONS COMMAND. He is the author of Persuasion & Power (Washington: Georgetown U. Press, 2012) and The Pakistan Cauldron (Washington: Potomac Books, 2011). The opinions expressed is his own and not those of the U.S. Government, its departments, agencies, or COCOM.