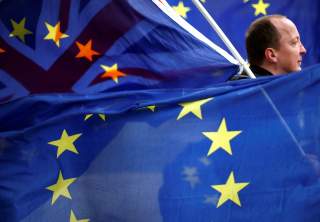 Britain’s departure from the European Union and the forging of a new cross-Channel relationship was supposed to be one of the “easiest” deals “in human history.” It has, instead, turned out to be a national nightmare and an international embarrassment.

At first, Britain was supposed to leave the European Union on March 29. But with the House of Commons repeatedly refusing to endorse Prime Minister Theresa May’s negotiated exit deal, the date got pushed back to April 12. Now, Jean-Claude Juncker, president of the European Commission, has said that there will be no more delays to the Brexit departure date unless politicians in London can agree upon a way forward soon.

As of right now, they show few signs of doing so, which means that Britain is careening towards a devastating “no deal” departure scenario.

There are several sticking points that have prevented members of Parliament from either agreeing to May’s plan for Brexit or coming up with a workable alternative.

First and foremost, members of Parliament disagree on the terms of May’s Withdrawal Agreement itself. The Irish backstop is particularly controversial. Agreed to back in December 2017, this provision ensures that under no circumstances will Britain’s exit from the EU lead to a “hard border” on the island of Ireland. It works by committing the UK to remaining in “full alignment” with most of the EU’s economic rules and regulations for as long as it takes for the two sides to come up with alternative “agreed solutions.”

The backstop is despised by hardcore Brexiteers inside the governing Conservative Party and by Northern Ireland’s Democratic Unionist Party (DUP), however. The former cannot abide any situation where the UK is a rule-taker from Brussels (which would be the case if it proved impossible to prevent a hard border without Britain remaining subject to EU rules), whereas the latter fears that, when push comes to shove, a future government in London might agree to placing Northern Ireland under EU rules as a means of extricating the rest of the UK (England, Wales, and Scotland) from the bloc. While the DUP support Brexit, they will never agree to anything that might weaken Northern Ireland’s ties with the rest of the UK.

Combined, these two groups of members of Parliament have been enough to deprive Theresa May of the majority she needs for her withdrawal agreement. They have voted her down on three occasions this year, joining with opposition MPs to inflict upon May the biggest parliamentary defeats of any prime minister in memory.

But the withdrawal agreement only deals with the nuts and bolts of Britain’s technical departure from the EU. It establishes a two-year transition period for hammering out a future relationship but says nothing about what that relationship should look like. Here, too, members of Parliament find themselves in bitter disagreement over how to proceed.

The prime minister’s vision of the future relationship is laid out in the so-called political declaration, a separate (and nonbinding) document from the withdrawal agreement that has been jointly authored by British and EU negotiators. As it stands, the political declaration establishes a few concrete proposals for how the future UK-EU relationship should be organized (an end to the free movement of people, for example) but, in other areas, creates something of a blank canvas for whoever will be tasked with the next phase of negotiations.

For some members of Parliament, the vagueness of the political declaration constitutes an additional stumbling block. They are adamant that the future relationship must be decided upon before the UK leaves the EU, not during an uncertain transition period, lest the country be plunged into a “blindfold Brexit” scenario.

The problem is that MPs cannot agree on anything specific with which to replace May’s plan. On Monday, the House of Commons rejected two possible arrangements: a plan to form a customs union with the EU, which would emulate Turkey’s current relationship with Brussels; and a plan to participate in the EU’s Single Market (“Common Market 2.0”) but not its supranational institutions (drawing inspiration from the Norwegian experience). Motions calling for a second referendum and to cancel Brexit altogether were also defeated. (All four of these ideas, plus six others, were voted down last week, too.)

If members of Parliament had been able to agree on a preferred configuration of the future relationship with the EU, then such a formula might feasibly have been put into a revised version of the political declaration and adopted as the starting point for UK-EU negotiations. That they couldn’t agree on anything is thus somewhat embarrassing, revealing that members of Parliament can’t even succeed at making up Brexit as they go along.

So, it was that at the beginning of this week the UK Parliament was as deadlocked as ever over how to proceed with Brexit. Desperate times call for desperate measures. And in Britain, that means cross-party talks—something de rigueur on the continent and elsewhere in the world, but largely alien to British political culture.

On Tuesday, Prime Minister May announced that she would seek a formal dialogue with opposition leader Jeremy Corbyn, with a view to finding a cross-party consensus on Brexit. Discussions began on Wednesday and continued today. They did not get off to an auspicious start, with Tory right-wingers like Jacob Rees-Mogg castigating the prime minister for contracting out Brexit to a “Marxist” and Labour supporters wincing at the memory of Ramsay MacDonald, a past Labour leader who entered into a National Government with the Conservative Party (in the 1930s) and has never been forgiven for his supposed act of betrayal.

Still, it is possible that the two leaders will be able to cobble something together. At least, there are some areas of common agreement. Both parties are committed to the basic principle of leaving the EU, for example, and both agree on the need to end the free movement of people across the English Channel. If Theresa May could adopt some of Labour’s policies on a closer economic relationship with Europe, then it might be enough to create the basis for a genuine cross-party plan for how to deliver Brexit.

Even so, it would remain to be seen whether a cross-party compromise would enjoy the support of a majority of members of Parliament. Party discipline can no longer be taken for granted. For months now, dozens of Tory members of Parliament have voted against the government without compunction. Many will continue to do so. And almost every Labour member of Parliament will recoil at the idea of enabling a Tory government to deliver Brexit; even if the bulk might be persuaded to go along with the plan, some of Corbyn’s staunchest critics could well use the opportunity to challenge his leadership.

It warrants asking, then: what if a cross-party deal is not forthcoming? What if such a deal cannot pass muster in the House of Commons? What if Parliament continues to face deadlock?

The only options left would be to cancel Brexit altogether, put the question back to the people in a second referendum, or to hold a General Election in hopes that a new assembly of members of Parliament would be better placed to find common ground (or at least a majority in favor of something) than the current lot.

None of these would be easy to implement. Few in Parliament support the first option, given that both major parties ran on the promise of implementing Brexit as recently as June 2017. There is demonstrably more parliamentary support for the idea of a second referendum, but supporters of this proposal have twice come up short in the House of Commons.

This leaves a general election as the only remaining path forward for breaking the logjam. But even this might be difficult to implement. Under the Fixed-Term Parliaments Act, two-thirds of members of Parliament must vote for an early election to take place. Presumably, all 318 opposition members of Parliament (Labour, the Scottish Nationalists, Liberal Democrats, Change UK, Plaid Cymru, the Greens, and eleven independents) would vote for the chance to defeat the government. But it is not obvious that Tory members of Parliament would endorse the plan, not least of all because it would put the party in the unpleasant situation of having to agree upon a common European policy.

Of course, something must happen. Either Britain will leave the EU on or shortly after April 12 or else something dramatic will happen to throw the entire process into another phase of disarray and uncertainty. It is just desperately unclear what that “something” will be. Nobody—not even the prime minister—can know what will unfold over the coming days and weeks.

Perhaps the best that the country can hope for is that May and Corbyn can strike a bipartisan compromise capable of progressing through Parliament. The worst that could happen is that things continue as they have been for the past six months.