Inside the Fight to Control the Iran Protests Narrative 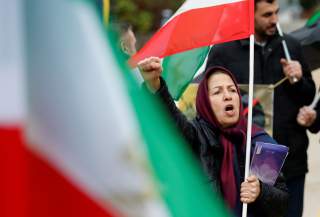 “It wasn’t planned or anything but, you know, I was not going to sit there and allow him to pretend that he cheers for the people of Iran, and take advantage of this situation, and push forward for the agenda that he’s always been pushing for,” Trita Parsi, president of the National Iranian American Council (NIAC), told me on Tuesday.

Earlier in the day, a comment he made on MSNBC to William Kristol, The Weekly Standard editor-at-large and neocon éminence grise, went viral.

“MSNBC Guest Rips Bill Kristol’s Support of Iran Protests: ‘You’ve Been Advocating Killing Iranians,’” blared the news site Mediate, one of a number to pick up the exchange. Left-wing stalwarts such as Glenn Greenwald, and many others, swiftly rallied to cheer him on social media.

Parsi’s comments—“With all due respect, you’ve been arguing to bomb Iran for so long, so I don’t really know if you’re really respecting the Iranian people…. I don’t think you or the Trump administration really have the credibility to say that you now care for the Iranian people”—have seemingly earned equal enmity on the neoconservative right, as well as the establishment left.

“Trita, Bill Kristol is not advocating to kill anyone. Let’s make that very clear,” said Ruhle.

The fracas—and the ensuing battlelines—underscore the broader debate in the West over the #IranProtests that first erupted New Year’s weekend.

“I was glad I was able to get Mr. Parsi to say that he was on the side of the Iranian people not the Iranian regime,” Kristol e-mailed to me Tuesday night. “No one knows what will happen…. But I do object to the fatalism that says this couldn't be a big moment…. You never know at which moment oppressive regimes snap, but it's worth doing everything we can in this instance to help.”

Kristol repeatedly made the point after Parsi’s charge to press the NIAC president on his loyalties. “Do you stand with the Iranian people?” Kristol asked. “OK, fine! We’re in agreement.”

Others leaping to The Weekly Standard editor’s defense aren’t as quick to seek some kind of accord with Parsi.

Bloomberg columnist Eli Lake took to Twitter Tuesday to suggest Parsi takes his cues straight from Tehran, calling him a “regime lobbyist,” and later “a lobbyist for the regime currently killing Iranians.”

“He advocates for the Rouhani faction of the Iranian state,” Lake messaged me. “He has connected politicians to Javad Zarif, Iran’s current foreign minister. He pleads Iran’s case on the nuclear deal. His organization was founded to be an Iranian AIPAC. The big difference is that Jewish Americans generally support Israel, whereas most Iranian-Americans fled the Islamic Republic, and to this day despise the regime.”

Lake then linked me to a 2009 Washington Times article by him to bolster his claims.

But Parsi has vocal defenders. “The worst part—and the most revealing—was how truly offended the MSNBC host was at @tparsi's suggestion that there may be some inconsistency between Bill Kristol's professed love for The Iranian People and his long-time desire to drop bombs on their heads,” Greenwald tweeted.

Scott McConnell, founding editor of The American Conservative, agrees. “I was most struck by the MSNBC host’s tenderness towards Kristol, which I think perhaps means that in the new liberal universe, if you nominally oppose Trump, you can be a good guy even if you are a warmonger,” McConnell writes to me. McConnell is not alone in recognizing this bizarre, new paradigm ushered in by the Trump era. Greenwald sarcastically notes that MSNBC has become Kristol’s “TV home.”

And more interventionist-leaning liberals from the Obama administration have publicly said in recent days that they wished Barack Obama had done as President Trump has done—staunchly back the protestors, including Leon Panetta, the former CIA and Defense chief.

But it is the dispute between Parsi and Kristol that distills the dispute over Iran to its essence. “I mean, he’s calling for the very same measures he was calling for before,” Parsi argues to me, referring to Kristol. “He wants more sanctions, et cetera. And it’s very clear those are not the things the Iranian people are calling for.”

Kristol referred me to two articles Tuesday. “Am more inclined than I was a couple of days ago to agree with the Fly/Goldberg piece tonight,” Kristol wrote. The New York Post piece by Jamie Fly, Marco Rubio’s neocon former national security advisor, and Richard Goldberg, a former Hill aide and self-described “architect of Congressional sanctions against Iran,” opines: “All regime officials and assets should be re-designated under US sanctions, immediately freezing the supreme leader’s vast business empire in all its parts.”

The second piece Kristol alluded to was a New York Times by former CIA officer Reuel Marc Gerecht that argues: “Washington should also let loose a tsunami of sanctions against the Revolutionary Guards, the linchpin of Iran’s dictatorship. Policy-wise, that would be a good place to start.”

Both Goldstein and Gerecht are associated with the Foundation for the Defense of Democracies (FDD). As I have reported extensively, FDD has become the administration’s go-to policy shop on Iran.

And perhaps that’s an indication of where the U.S. response to the protests is headed. Some, including Parsi, think the domestic unrest in Iran will make it more likely that the president will finally scrap the Iran deal in the coming weeks. “I think it makes it far more likely that he is not going to renew the waivers and essentially put the United States in violation of the deal. I think that’s what he was planning to do, anyway. Now he has, essentially, an easier context to sell that decision,” Parsi says.

McConnell thinks Kristol seems unusually optimistic, saying of the Tuesday MSNBC appearance: “I was struck too by Kristol’s praise of the ‘Trump administration’—a way of signaling that there may be enough neoconservative influence in the administration that it should be backed, even if you are nominally a ‘never Trump’ person.”

But Trump’s apparent leaning towards actually pulling out of the deal—although long standing, at least officially, consensus among U.S. Republicans—is pitted against skepticism among senior administration officials.

If anything could keep the president from termination, it would be the repeated cautions against such a move from those such as Secretary of Defense Jim Mattis (who has expressed such sentiments publicly), who remains in Trump’s favor, as well as officials in more precarious political situations, such as Secretary of State Rex Tillerson and National Security Advisor H. R. McMaster.

“Not sure about the Cabinet guys…,” Kristol e-mailed.