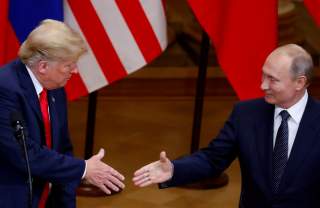 Over the past several years, it has been asserted that a key parameter of Russian global strategy is to undermine democracies. This narrative helps to define the strategic partnership between Russia and China as an “axis of autocracies.” Yet the question needs to be probed more deeply. Does the Kremlin seek to undermine democracies because of an ideological dislike of that form of government, or have the Russians taken action against governments that happen to be democracies?

When one moves out of the Euro-Atlantic region, the picture becomes far less clear. The pattern of Russian activity observed in Europe and North America does not appear to be replicated in other parts of the world. While there might be highly classified accounts, published reports do not suggest that Russian hackers and social-media engineers have interfered in elections in major non-Western democracies like Japan or South Korea. While there have been assertions that Russian activity has been detected during the Brazilian presidential election this past year and in the run-up to India’s own poll, that evidence is contested and the incidents in which Russian actors have been alleged to interfere have been minor. In contrast to very public denunciations of Russian actions by Western governments, non-Western democracies seem prepared to argue that the Kremlin appears to be uninterested in involving itself in their political affairs.

Is there a reason we can discern for this distinction? In fact, Russia may have less propensity to duplicate the tactics utilized during the Brexit referendum and the U.S., French and German elections in other parts of the world.

First, if Russian activity is driven less by ideology and more by state interest, then there is no benefit to overt interference in the major non-Western democracies. For the most part, these countries have reasonably stable relationships with Russia that are not impacted by electoral changes. Successive Indian, Japanese, Korean and Brazilian governments have maintained a high degree of continuity in their policies towards Russia, meaning that there is no clear incentive to back one particular party or candidate over another. Any major Japanese politician will want to encourage development of economic ties with Russia as a way to help balance China in the region, yet will be constrained by the territorial issues surrounding the Kuril Islands. The Russia-India partnership is well-defined and entrenched in key political and business sectors in India, and its parameters have not been impacted by major political swings in New Delhi. South Korea and Brazil have not joined major Western-initiated sanctions on Russia and continue to pursue partnership opportunities with Moscow.

Second, democracies in the non-Western world tend to see forms of government not as universal but sui generis to particular countries and civilizations. None of the major  non-Western democracies view democracy promotion as an integral part of their foreign policy nor do they expect that their partners share similar forms of government. Add to this a strong neo-Westphalian bent of some of the major Southern-cone states—notably India—which prizes sovereignty and non-interference in the domestic affairs of other states, which, in turn, produces little impetus to export particular models of governance to other countries. How Russia governs itself, therefore, is not really a concern in Seoul or Brasilia—and to some extent, how Seoul and Brasilia are run appears not to be a concern of the Kremlin. Unlike the USSR, contemporary Russia has no political model to export, but most non-Western democracies similarly believe that their particular forms of governance are also non-exportable.

What could change this state of affairs? One factor is whether, in the coming years, parties and politicians emerge in the non-Western democracies that are antagonistic to Russia or more inclined to embrace notions of democracy promotion. This could then incentivize Moscow to engage in the same sorts of activities it has done in the Western world. Conversely, if trends in places like Poland, which is experiencing its own backsliding in terms of adherence to liberal democratic values, produces more authoritarian governments that also tend to be more anti-Russian, Moscow could see how strengthening, rather than undermining, democratic norms might serve Russian interests. Certainly, in retrospect, the Donald Tusk administration in Poland was more open to seeking improvement of relations with Russia than the current law-and-justice team, even if the present government is, in terms of temperament and focus, more aligned with trends in Russia. Similarly, Moscow has not resisted moves towards greater democratization in Armenia, in part because Yerevan’s overall orientation remains aligned with Russia.

Russia does not trust that democracies in the major Western countries will produce governments friendly to Russian interests—and so Moscow has chosen to meddle in their affairs to try and produce what are, from the Kremlin’s view, more acceptable outcomes. Russia may continue to do so unless the costs of such meddling are so counterproductive to Russian interests that interference loses its value—or when Western governments are less inclined to challenge core Russian interests (including the strengthening of pro-Western democratic movements in the former Soviet space and the continued enlargement of Euro-Atlantic institutions eastward). Thus, it is important to closely monitor the next election cycles in the world’s major democracies.