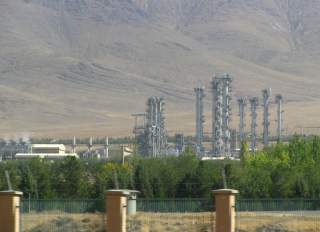 The nascent U.S.-Iran nuclear deal seeks to diminish Iran’s nuclear program in return for relaxing sanctions. Advocates of the deal highlight the intrusive inspections regime that will monitor Iranian compliance. Some have also noted that the inspections regime creates new opportunities for intelligence gathering, including the chance to scrutinize Iran’s manufacturing base, not just its nuclear facilities. New inspections will also cover the whole nuclear fuel cycle, which means that Iran will have to construct a fully parallel covert program if it wants to beat the inspectors. This would make it easier for intelligence to detect cheating.

Critics, however, worry that the intelligence community has not kept up with Iranian developments over the last decade, despite the fact that the Iran’s nuclear program has been the focus of international scrutiny. They charge that intelligence agencies have been naïve, vulnerable to surprise, and forced to backtrack from their embarrassing blunders.

None of these claims are correct. Contrary to popular views, the intelligence community has been quite successful in tracking Iran’s nuclear program.

Consider the 2007 National Intelligence Estimate (NIE) on Iran’s nuclear program, which provoked a burst of criticism as soon as the summary judgments were declassified. Henry Kissinger called it a “policy conjecture” masquerading as a sober estimate. The Wall Street Journal called it a “fiasco.” Former House Intelligence Committee Chairman Peter Hoekstra called it a “piece of trash.”

In fact, the NIE was accurate and prescient. It concluded that before 2003, Iran had an organized nuclear weapons program, but that it had disbanded the formal effort under international pressure. There is no evidence this was wrong or that Iran had resuscitated work on weaponization, though laboratory scale research would be hard to detect. More importantly, the estimate concluded that Iran was continuing to install enrichment centrifuges and work on related technologies. This was the NIE’s critical if overlooked conclusion, because the process of accumulating fissile material is the most demanding part of becoming a nuclear power. The estimate concluded that Iran would be “technically capable of producing enough [highly enriched uranium] for a weapon sometime during the 2010-2015 time frame.” By November 2013, Iran had accumulated more than enough uranium for a bomb if further enriched.

Two years after the NIE controversy, Iran disclosed the existence of the Fordo uranium enrichment facility, which was buried in a mountain near the city of Qom. This surprising revelation fed the belief that intelligence could not keep track of covert Iranian nuclear activities, and some observers continue to see it as proof of the limits of intelligence. Earlier this week The New York Times’ David Sanger wrote that the CIA “missed a large underground site called Fordo” and was forced to rely on allied intelligence services for information about what was going on in Iran. “The CIA's ability to detect covert nuclear sites,” he concluded, “has been mixed at best.”

But it is not clear that the CIA or any other agency was caught unaware. Intelligence officials explained at the time that they knew about Fordo but were reluctant to go public, both because of the traditional concern about revealing sources and methods, and because they wanted to make the “strongest possible case” about the nature of the facility. Satellite imagery reportedly spotted suspicious digging at the site long before Iran started installing equipment there in 2009. While intelligence officials obviously have reason to put a positive spin on their record, no subsequent reports indicate that they were misleading the public.

Critics claim that intelligence agencies have sheepishly backtracked from their previous views of Iran. As John Bolton put it in a recent New York Times op-ed, “there is now widespread acknowledgment that the rosy 2007 National Intelligence Estimate, which judged that Iran’s weapons program was halted in 2003, was an embarrassment, little more than wishful thinking.”

Bolton may believe this but public statements from the intelligence community have been remarkably consistent on Iran since the original NIE. The Director of National Intelligence’s annual threat briefings to Congress, for instance, have stressed the same basic conclusions: Iran’s weapons program ended in 2003 but its enrichment program did not; Iran has worked hard to master the fuel cycle; Iran may seek nuclear weapons but it is also sensitive to economic and political pressure; and Iranian leaders have not made a final decision about whether to build an arsenal. Even a cursory reading of these statements, all of which are online, belies the notion that the intelligence community is running from its previous conclusions.

For all the criticism of its performance, the intelligence community has done well to keep up with Iran’s nuclear activities over the last decade. There is no obvious flaw in its conclusions or evidence that has reversed course. Indeed, this looks like an analytical success story. The 2007 NIE had the basics right, and estimates evolved as the intelligence community acquired new information. There may be reasons to be skeptical about a nuclear deal with Iran, but bad intelligence is not one of them.