Interests First: How the Quad Can Deter Chinese Aggression Against Taiwan 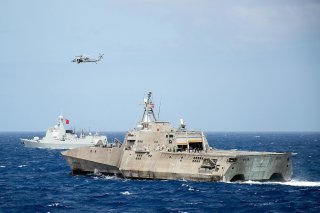 Testifying in front of the Senate Armed Services Committee in early March, outgoing Indo-Pacific Commander Adm. Phil Davidson sounded the alarm regarding China’s immediate objectives in East Asia: “Taiwan is clearly one of their ambitions . . . And I think the threat is manifest during this decade, in fact, in the next six years.” This sobering timeline is driven by Chinese Communist Party (CCP) Chairman Xi Jinping’s perception that he has a fast-closing window of opportunity to cement China’s geopolitical position in an increasingly multipolar world order before internal contradictions, economic stagnation, and demographic challenges snag his country in the middle-income trap. Regardless of whether this timeline accurately reflects Xi’s intentions and plans, the Chinese threat to Taiwan is very real.

Joe Biden’s White House has sought to distance itself from the Trump administration at every available opportunity, but one policy imperative has endured. Biden continues to hold a progressively rigid line against China premised on the multilateral idea of a “free and open Indo-Pacific.” If Biden plans to make good on his declaration that China will not become the most powerful nation in the world during his presidency, then he must extend this principle to Taiwan and keep it “free and open” from the CCP’s authoritarian grasp.

Despite not being bound by a formal treaty alliance, Taiwan and the nations of the wider Asia-Pacific region have long anticipated that America would intervene to guarantee the island’s national security and political sovereignty in response to unilateral Chinese aggression. The CCP has turned this faith into fantasy. Based on the qualitative advances made by the People’s Liberation Army (PLA) during its ongoing reform and modernization, it is doubtful the U.S. military would succeed in repelling a cross-strait invasion alone. Given this reality, America must look to its regional allies and partners for unvarnished clarity on their commitment to extending a “free and open Pacific” to Taiwan. While the United States enjoys multiple mutual defense treaties in the region and counts numerous nations as partners, only one relationship gives Beijing pause: the Quadrilateral Security Dialogue (Quad).

The White House confirmed on September 13 that Biden would host the first Quad Leaders Summit on September 24, following the UN General Assembly meeting in New York. The president should leverage this gathering to gain a Quad-wide consensus on a shared definition of a “free and open Indo-Pacific.” A unified outlook would operationalize this phrase into a strategy that can effectively deter Chinese aggression. When weighing options in the Indo-Pacific region, defining a position on Taiwan should be the Quad’s top priority.

The Quad Begins to Coalesce

After a decade-long hiatus, the Quad is hitting its stride. Over the past year, the loose gathering of generally like-minded democracies has become a cohesive coalition of friends and partners working to further mutual and collective interests.

India and Australia announced two defense-focused arrangements in June 2020: the Mutual Logistics Support Arrangement and the Defense Science and Technology Implementing Arrangement. The former allows reciprocal access to military bases, and the latter enhances cooperation between their respective science and technology research organizations. Two months later, India inked a logistics support agreement with Japan similar to the one it signed with Australia. Japan and Australia established a Reciprocal Access Agreement in November 2020 allowing bilateral basing access and combined training and operations between the two nations’ armed forces. In a June 2021 follow-up to this announcement, Japanese leaders made a guarantee that their Self-Defense Forces would provide protection to Australian ships should they request it. And for the first time, the two sides addressed “the importance of peace and stability across the Taiwan Strait” in a combined statement.

In addition to security cooperation, the Quad has taken the initial steps toward articulating and codifying a shared purpose. The four nations released a Joint Statement at the conclusion of the first Quad Leaders’ meeting in March 2021 that expounded on their vision and outlined an ambitious agenda tied to “the most urgent global challenges.” Among the priorities: combatting the coronavirus pandemic, climate change, and addressing the “shared challenges” of cyberspace, critical technologies, and counterterrorism. In committing to tackle many international issues, the Quad omitted one of the most pressing regional ones. While they pledged to support the Association of Southeast Asian Nation’s unity and centrality, counter challenges to the rules-based order in the East and South China Seas, and committed to the denuclearization of North Korea, Taiwan received no mention.

What Defines a ‘Free and Open Indo-Pacific?’

While the Quad nations have consistently touted a “free and open Indo-Pacific” as the punchline for their shared aim, they have yet to define what this phrase means. The slogan briefs well in policy speeches and talk show soundbites but means little in regional capitals and forums. Notwithstanding its omission of Taiwan, The Spirit of the Quad provides a comprehensive strategic ideological blueprint. The group must now operationalize its strategy into policy objectives that can be planned for, resourced, executed, and achieved.

The Quad does not need to define a position on every geopolitical dynamic in the Asia-Pacific region. Instead, it should adopt an interest-based approach to its collective security based on a hierarchical ranking of regional threats. Thus, the group must decide, within the structure of a “free and open Indo-Pacific,” among all the items that demand its attention, what issues require the Quad’s attention now? In their joint statement, the Quad nations wrote: “We strive for a region that is free, open, inclusive, healthy, anchored by democratic values, and unconstrained by coercion.” If this can be taken as a mission statement, then a Chinese invasion, occupation, and seizure of Taiwan would seemingly rank near the top of the pyramid. Similar to Secretary of State Dean Acheson’s famous 1950 failure to include the Republic of Korea in America’s Pacific “defensive perimeter” appearing as an open invitation to North Korean aggression, the Quad’s decision to address some areas of concern (e.g., the rules-based maritime order in the East and South China Seas) while neglecting others (e.g., the sovereignty of Taiwan) will only embolden China. Simultaneously, intransigence over Taiwan would reinforce the perception that the Quad’s interests are too divergent for the group to confront China directly.

The Quad would not be the first regional grouping to publicly underscore the threat Chinese adventurism poses to its shared interests. The communique the North Atlantic Treaty Organization issued at the end of its June summit called out Beijing’s “ambitions and assertive behaviour” as “systemic challenges to the rules-based international order and to areas relevant to alliance security.” If an alliance originally established to deter Soviet aggression can reassess its security environment to identify Chinese malign intent as a looming threat, then an organization born of cooperative disaster relief can do the same.

Time is running out for Taiwan. The cross-strait balance of power has rapidly shifted in Beijing’s favor, with the asymmetry growing by the day. Hopes that America’s policy of “strategic ambiguity” would lead it to unleash the U.S. military juggernaut in the event of a PLA invasion are now defunct. The PLA Rocket Force can threaten America’s traditional means of force projection—its fleet of aircraft carriers escorted by multi-role surface combatants—at ranges so great the F/A-18 Hornets and Tomahawk cruise missiles these vessels carry have become woefully obsolete. This threat is buttressed by the PLA Navy (PLAN) and PLA Airforce, which carry an impressive array of offensive weapon systems designed to both cripple and catastrophically destroy America’s exquisite platforms at ranges so extreme they will be knocked out before they can influence the fight. The Department of Defense’s last bastion of conventional technological superiority—its submarines—would devastate a future PLAN blockade of Taiwan. However, given the shallow depths of the Taiwan Strait, American fast attack boats would be helpless in sinking the PLAN’s amphibious assault ships carrying the troops of the PLA ground invasion force.

The PLA is pushing the status quo so rapidly that U.S. military planners can no longer articulate what defines the status quo. This was highlighted in mid-June when the PLA sent its largest-ever air contingent of twenty-eight aircraft to violate the Taiwanese Air Defense Identification Zone. In April 2021, on the seventy-second anniversary of the PLAN, with Xi in attendance, China commissioned three warships—an amphibious helicopter carrier, a Renhai-class guided-missile cruiser, and a ballistic-missile submarine. This remarkable fielding of naval firepower contrasts sharply with the seven warships the U.S. Navy plans to commission in the whole of 2021.

The original question overshadowing the cross-strait balance of power was, “can Taiwan repel a Chinese invasion?” As the military balance began to shift rapidly in Beijing’s favor in the early 2000s, the question evolved into, “can Taiwan hold on long enough to allow the Americans to get there?” Today the question has become, “would American intervention be enough to defeat a Chinese invasion?” Despite the current Indo-Pacific commander’s recent statements to the contrary, Pentagon wargames held last October answered this question unequivocally in favor of a PLA victory.