International Travel Is the Key to Repairing America’s Economy 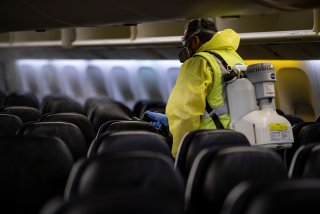 There’s a big part missing from plans to restart the economy: a framework for resuming international travel. Without this, America will be leaving significant recovery resources on the table for many of its most impacted workers and foregoing steps that will reassure its citizens about safe travel.

Earlier this month, Treasury Secretary Steven Mnuchin addressed international travel, remarking that, “Obviously, for businesspeople that do need to travel, there will be travel on a limited basis,” however he also added that it was too hard to tell if most travel to and from the United States can resume this year. This message will lead to economic doom and gloom rather than the “boom” that President Donald Trump has promised.

U.S. government agencies handling the travel industry are waiting for guidance from above. Trump should lead the industry’s recovery given that he has years of experience in the hospitality industry and understands how businesses must have bookings in order to survive.

As the country that effectively pioneered modern international travel, surely America can find a way to implement necessary safeguards and practices to restore travel. With American determination and ingenuity, the country can defy pessimistic expectations that travel will inevitably be too risky. America should be using this crisis to make foreign travel safer, healthier, and more accessible than ever before.

Why bother taking the risk? Presupposing that travel is a mere luxury, many Americans do not realize the importance of the industry to the U.S. economy and to the millions of workers who are dependent on the dollars it generates. According to the U.S. Travel Association, international visitors spent $155 billion in 2019.  To put that number in perspective, international travelers to America spend more in our cities and rural communities than the equivalent of foreign consumers buying 4.2 million American-made cars.

Many tourism jobs depend not only on domestic travel but on international visitors who spend disproportionally greater amounts on lodging, shopping, food, and experiences. Picture Barstow, California, a town where working and middle-class jobs are reliant on the shopping outlets and restaurants frequented by countless European and Asian tourists stopping on their journey between Las Vegas and Los Angeles.

To save jobs and towns like these, the private sector is already doing its part.

Many airlines have taken advantage of empty airplanes to space out passengers and planes are now thoroughly disinfected. Modern aircraft use cabin air filters similar to those used in hospitals. Airlines will further enhance air quality by requiring the use of facemasks until the crisis abates. The CEO of Southwest Airlines recently said that he is urging the Transportation Security Administration to conduct temperature scans. Frontier Airlines isn’t waiting for the government, announcing its own plan to check passengers’ temperatures, a practice Air Canada already started this week.

Taking this step would bring America closer to leading airports in Asia, which since the 2002 SARS outbreak have passively screened passenger temperatures, stopping those exhibiting fevers for more thorough screening. Were America to follow suit, travel to and from the United States could be healthier than ever before.

Going a step further, with the growing prevalence of rapid coronavirus tests, America could require a test for all international travelers while the pandemic persists. Vienna’s airport now offers rapid testing, which allows travelers to skip a fourteen-day quarantine. Iceland is following suit. With such screening in place, traveling from London to Los Angeles would present less risk than a trip from Nashville to New Orleans.

The world will not wait for America. For example, Germany is likely to begin easing international travel restrictions on its citizens on June 15. The number of per-capita cases in Germany is nearly half that of ours. With proper sanitation and screening, why not allow German tourists to visit America and spend money here rather than effectively telling them to take their money elsewhere this summer? The demand is there. A recent survey by a leading German travel company found that 90 percent of their customers wanted to proceed with their planned travel to North America this summer if permitted.

Asia also seems to be moving faster than America. Hong Kong has just reopened gyms, bars, and movie theaters, and its airport offers coronavirus tests on arrival. Singapore is examining a selective reopening of its borders.

These developments show that travel businesses cooperating with governments can reach pragmatic solutions to restart an integral part of our economy and way of life. But here in America, the federal government needs to show more urgency. It must take steps like resuming the normal issuance of passports, opening the national parks, and providing screening for travelers arriving in or departing the United States.

All of this should happen urgently. America has a choice between making travel worse or better, and restoring the livelihoods of millions of workers during the summer travel season, or having them on government support indefinitely. It should choose to travel safely—the sooner the better.

Noel Irwin Hentschel is the CEO of AmericanTours International, which she co-founded in 1977. She serves on the board of Brand USA and has advised seven U.S. Secretaries of Commerce on travel and tourism.