Interpol’s New Leadership Demonstrates Lack of Will for Reform 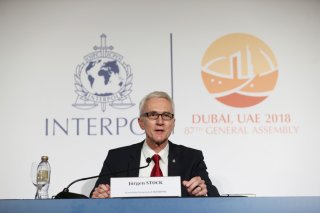 Interpol makes valuable contributions to fighting crime that crosses international borders, but human rights organizations have rightly criticized the organization for failing to properly vet requests for police cooperation. Interpol did nothing to calm those concerns at its latest General Assembly meeting, held November 23-25 in Istanbul.

Countries like Turkey, Russia, China, Venezuela, and the United Arab Emirates have repeatedly abused Interpol’s mechanisms—including its famous Red Notices—to harass and persecute dissidents, refugees, and business owners with assets that regimes want to steal. As a result, Interpol has too often become complicit in human rights abuses, ranging from unjust detentions to renditions, that it is bound by its own rules to avoid.

These abuses reach into the United States, where the Department of Homeland Security and immigration courts too easily assume that all Red Notices are reliable. This results in countless unjust detentions of immigrants, many of whom are fleeing the dictatorial regimes that are targeting them through Interpol.

For those seeking to end these abuses, holding the General Assembly meeting in Istanbul sent the wrong message. Turkey is one of the worst abusers of Interpol. Sen. Roger Wicker (R-MI.) rightly called out the “alarming signs that Turkey is trying to leverage this year’s GA to further its own authoritarian goals.”

Even worse was the election of UAE major general Ahmed Naser al-Raisi to the presidency of Interpol. Al-Raisi is credibly accused of the torture of detainees, including a British citizen. The UAE is one of Interpol’s major funders—and also one of its most abusive member states.

Interpol’s leadership, personified by its Secretary General Jürgen Stock, made misguided efforts to downplay the impact of al-Raisi’s election by asserting that he would continue to represent the UAE, not Interpol, in what he alleged is mostly a symbolic role.

But the fact remains that Interpol’s member nations have elected an alleged torturer as their leader. There’s a lot of symbolism in that.

The results of the elections to Interpol’s executive committee were equally depressing: of its twelve members, only four (from the United States, Spain, the United Kingdom, and the Czech Republic) have a good record in Interpol. The remaining eight members are from weak and corrupt democracies like Kenya, dictatorships like Sudan, or abusive autocracies like Turkey and China.

The executive committee’s role is anything but symbolic. It supervises the execution of the General Assembly’s decisions and prepares the agenda for General Assembly sessions. The committee plays a powerful role in defining the future of Interpol.

Tellingly, since the elections, the Kenyan committee member has been jailed and the Sudanese member has reportedly been fired. While that improves the position of the democracies on the committee, it’s no advertisement for Interpol or the wisdom of its General Assembly.

The problem isn’t just that Interpol’s member nations made bad choices in these elections. It’s that if they don’t care enough to make better choices, there is no reason to believe they’ll support the reforms that are needed or even respect Interpol’s rules.

Clearer and more vigorous American leadership is sorely needed. In 2018, the United States led the fight when a Russian candidate looked likely to win Interpol’s presidency. This time, disconcertingly, the United States did not speak out publicly against al-Raisi’s election.

The United States is Interpol’s single most important member. It contributes 15 percent (20.25 million Euros) of Interpol’s annual revenue; no other nation contributes more. It wants nothing more than for Interpol—and Interpol’s member nations—to live up to the rules.

But appealing to the rules, or the good consciences of Interpol’s member states, is clearly not enough. That’s why the provisions of the bipartisan TRAP Act are so important. The Transnational Repression Accountability and Prevention Act would commit the United States to opposing Interpol abuse and prevent the worst abuses of Interpol within America’s borders.

Many of the original TRAP Act’s provisions are included in the conference version of the National Defense Authorization Act (NDAA) passed by the House earlier in December. While this NDAA TRAP is weaker than the stand-alone TRAP Act, it would still be a valuable contribution to fighting Interpol abuse and a sign of Congressional commitment to the cause.

Interpol is a valuable asset to the United States and to all democracies. The more it is abused by the autocracies, the less reliably it can do its job – and the more it comes under the control of democracy’s enemies abroad.

The November meeting of the Interpol General Assembly shed a disturbing light on how little most of its member states care about its rules. Either through the NDAA or on its own, the TRAP Act gives Congress a vital opportunity to show that it cares—and that it’s watching.

Ted R. Bromund is the senior research fellow in Anglo-American relations in The Heritage Foundation’s Thatcher Center for Freedom.