Intervention or Restraint: Ruger and Posen Debate Kristol and Flournoy 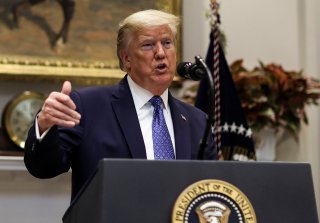 On the American Public Television program “The Whole Truth,” hosted by historian and author David Eisenhower, a panel of leading foreign policy figures, including William Ruger, Michele Flournoy, William Kristol and Barry Posen, recently debated America’s purpose. In his introductory remarks, Eisenhower observed that in his second inaugural address, George W. Bush had declared that America should strive to end “tyranny in our world.” How has America gone so quickly from that euphoric declaration to “America First”? Does America remain an “Indispensable nation” or should it embrace a more restrained role abroad?

Kristol contends, “it was a fact” that America was indispensable and that its turn away from foreign intervention represents a form of “selfishness.” Flournoy depicted the backlash against intervention as a return to “isolationism” and “nostalgia.”  America’s alliances, she said, are something that China and Russia “would love to have” and constitute an enormous advantage for America.

Ruger countered that American people are reacting logically to catastrophes and debacles engineered by the foreign policy elite and that a focus on restraint is long overdue—“the last twenty to thirty years haven’t been going so well.” “We need to make decisions about trade-offs,” Ruger added. “We’re almost twenty-three trillion dollars in debt.” The notion that reassessing America’s posture amounts to arguing for disengaging from the rest of the world, he said, is “a red herring.” Diplomacy and trade, he suggested, should be paramount and will contribute to America’s power. At the same time, America should retain a military second to none, while focusing on its vital interests. “What restrainers want to do,” he said, “is bring realism back into the conversation.” This valuable exchange highlights the most fundamental debate about America’s future grand strategy.