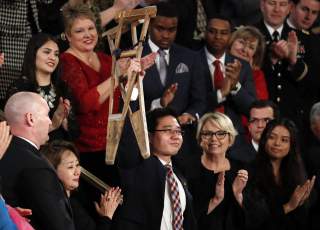 If the day comes that North and South Korea reunite as one country, North Korean refugees and defectors living in South Korea have a vital role to play. These Koreans have lived in both societies, and understand both the gravity of human-rights abuses undertaken by Pyongyang and the need for good integration policies from Seoul. Ji Seong-ho, a defector invited by President Donald Trump to his 2018 State of the Union Address, walked six thousand miles on crutches to escape North Korea and now leads a South Korean nonprofit called Now Action & Unity for Human Rights (NAUH). He focuses on “small unifications” to integrate other defectors as a way to help Koreans get to know each other in preparation for a future united Korea.

I reached out to Ji, asking him about his work and views on the future of North Korea. I also asked him about what it is that South Koreans or Americans may misunderstand about North Korea.

This interview has been edited for clarity.

How are NAUH’s “small unifications” helping to bridge the divide between North and South Koreans?

South Korea and North Korea were originally a single nation, but were divided into two separate nations by ideological differences. After the Korean War, a devastating war fought among the Korean minjok (people), the way people think has been polarized, and now, Koreans have become archenemies of one another. Technically, the war is not over, with the armistice still in effect. Seoul has been preparing for unification, but it’s not exactly an easy situation given the above-mentioned realities. Indeed, the governments and political systems of the two Koreas are very different, but mutually incompatible unification policies put forth by the South Korean left and right cannot be ignored either.

NAUH’s wish for “small unifications” means the unification between ordinary individuals, rather than the two governments. Integration between countries requires a long time. However, we can start practicing social integration right now via the integration of North Korean defectors living in South Korea into the local society. Currently, there are about thirty thousand North Korean defectors living in small communities in South Korea. Some say these people will work as the bridge for the post–unification society. If the defectors cannot become one with South Koreans, social integration in the post-unification Korea will be a far-fetched prospect.

We can dream of such “small unifications” because in the last eight years as we founded and ran NAUH, we have seen “small hopes.” We have seen young people from the South and North come together as friends, with mutual respect and acceptance, and without hesitation, in order to solve North Korea’s human-rights issues. To the South Korean youth, their North Korean counterparts were the same citizens and equal friends as them, who respect the same rules of the society. The North Korean youth shared stories and information about North Korea, which they know better than anyone else. Through this process, they came to understand one another.

In the years to come, NAUH will strive to bring together the youths of the South, North and abroad, to become one in order to communicate North Korea’s human-rights issues to the world, while also preparing to spread democracy. In the future, when North Korea opens up and the Koreas are unified, we will go into North Korea together with this united strength and lay the groundwork for the social integration of the unified Korean Peninsula.

Is Korean unification possible or desirable?

Unification is necessary. Perhaps, it is the North Korean people who most urgently feel that need because there is hope that they can escape the North Korean political structure after unification. Meanwhile, some people in South Korea have a more negative outlook, fearing the enormous cost of unification and the potential chaos during the ensuing process of social integration. There used to be many who held a more passive perspective, thinking the two Koreas should unify only when unification is absolutely necessary. Recently, more and more people are viewing unification in a positive light.

The problem lies in the outlook of the North Korean regime, which tends to avoid unification. Why is that? North Korea is a dynasty. On the other hand, in the South Korean political system, politicians lacking political competence or failing to represent the people can be impeached or forced to resign overnight, even if the said politician is the president. In this manner, South Korea is one of the most developed democracies in Asia. However, if North Korea were incorporated into this democratic system following unification, the maintenance of the dynasty—a dream of the House of Kim—becomes difficult. Hence, on the surface, North Korea may look like it is working towards unification, but in reality, Kim Jong-un does not seem to have the courage to actually unify. Thus, the question, whether unification is possible, is one I myself want to ask Kim Jong-un.

South Koreans wanting unification share one wish: North Koreans, who live without knowing what their rights are, must lead free and happy lives as soon as possible. The day the cycle of evil is broken and the Koreas unify, we want to run to the North Koreans and tell them we are there to not conquer, but embrace them. We want to tell them that we have been doing our best to prepare for unification, crying with them when they were hurting. For these efforts, we will continue to develop and educate youth leaders.

How can human rights be protected if unification did occur?

Human rights will definitely improve if we realize a democratic unification desired by South Korea, not the unification under communism that North Korea aspires to. I am certain of this. The foundation and basic philosophy of democracy is the recognition of the people’s dignity. If unification occurs in the spirit of democracy as pursued by South Korea, I think North Koreans will be integrated into the democratic society and naturally receive institutional support.

Institutionally, many rights and freedoms such as freedom of religion and labor rights will be realized. However, North Korean human-rights abuse can certainly happen in the context of employer-employee relations. We will work to prevent such abuses by coming up with different policies and methods so that North Koreans can successfully integrate into the democratic system.

However, North Korea’s state economy is on the verge of collapse. Without external support, it is has become inevitably difficult to manufacture nuclear weapons or retain the loyalty of the elites. Many hope that once Kim Jong-un gives up his nuclear arsenal, he will open up the economy as well. Yet, even a cursory look at the fundamental problems of North Korea demonstrates the nation’s economy is not a simple issue.

It is easy to assume North Korea has a political system disguised as socialism, similar to Vietnam and China, but such is not the case. North Korea is a dictatorship with hereditary succession of power, which runs counter to fundamental values of socialism. If North Korea undergoes reform and opening regarding its current succession of power, information and goods will permeate and spread through North Korea’s interior. Such an influx will raise the civic consciousness of North Koreans, who will recognize their rights and eventually strive to reclaim their lost rights. Once North Koreans realize all the pain in their past—losing family members to starvation during the Arduous March, experiencing torture after failed attempt at defection, etc.—was due to the regime’s repression, the people will blame the faulty regime and its leader. Hence, if North Korea undergoes reform and opening, their foundation of hereditary succession of power will be threatened. As long as Kim Jong-un wishes for a long-term dictatorship, he will neither reform nor open under any circumstances. Recently, Kim has been putting up a front in order for North Korea to be recognized as a normal country. Yet, from intensified human-rights violations and accelerated efforts towards his own cult of personality/self-deification, it appears the North Korean leader covets long-term dictatorship. Furthermore, he is probably aware of the fact that if reforms and opening take place, the people will demand justice from him five, ten, or fifteen years down the road.