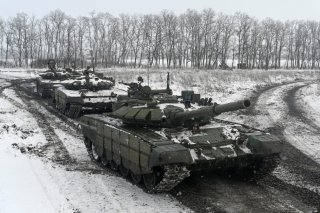 Has the Cold War returned with a vengeance? Some expert commentators seem to think so. Russia’s mobilization of over 100,000 troops near Ukraine’s borders this winter has led the United States and some allied NATO countries to threaten economic and political sanctions, including those specifically against the Kremlin’s leadership. Russia’s annexation of Crimea in 2014 and destabilization of eastern Ukraine since then has created uncertainty as to how far President Vladimir Putin might be willing to go, either in the way of scaled-up political pressure backed by military power, or in the worst extreme, an actual large-scale invasion with ambitious objectives, including possible regime change in Kiev. Several prognosticators and some Russian officials also assume that, should Russia decide to initiate a major military operation against Ukraine, the result would be a veritable walkover, with Ukrainian forces unable to offer more than a feeble and temporary resistance against overwhelming Russian combined ground, air, and naval forces.

However, if Russia should decide upon a major invasion of Ukraine, instead of spoiling operations limited to the Donbas, it will likely find that its own expectations for a quick and decisive victory at an acceptable cost will be disappointed. Some commentators have failed to consider all the factors that might go wrong for Russian planners. The irony is that NATO’s insistence on pretending that the door must remain open for Ukrainian membership, and Russia’s equally stubborn insistence that NATO must preemptively and publicly renounce any attempt to offer Ukraine membership in the alliance, are both in denial of the military and strategic reality. NATO is neither prepared nor inclined to defend Ukraine with military force, nor invite Ukraine to join the alliance. However, the massing of Russian troops on Ukraine’s borders has ironically provided a new stimulus for NATO’s political unity and increased military preparedness, and more willingness to consider Ukraine’s admission to NATO.

In short, a major war in Ukraine will leave Russia more isolated politically and more damaged militarily, with forces already strained by deployments elsewhere to deter threats in the Caucasus, Central Asia, Syria, and on the Chinese border. Putin also risks domestic political blowback if Russian casualties are high or operational and tactical failures become apparent in the early stages of fighting. War is always the domain of the unexpected, and combat is stalked by Murphy’s Law and Carl von Clausewitz’s reminder that “friction” (the difference between war on paper and the reality of military action) is inescapable once the shooting starts.

More importantly, any military collision between NATO and Russia will take place within a background of nuclear escalation. As both powers should have learned from their Cold War experiences, the threat of nuclear conflict invariably hangs over any military confrontation between the United States and Russia. Even short of explicit threats by NATO or Russia for nuclear use, direct military confrontation opens the door to misperceived intentions, miscalculated escalation, and a conflict spiral that escapes the control of policymakers. Any assumptions by NATO or Russia that the “selective” use of tactical nuclear weapons in Europe would act as a deterrent to further escalation are misguided and dangerous.

Yet, the showdown with Russia over Ukraine provides an opportunity for NATO to rethink its purpose and priorities for the twenty-first century. NATO’s past successes have been based on clarity and unity about its mission: the security and defense of free-market democracies in Europe. NATO is not a virus seeking to grow into every possible place for the sake of expansion per se, nor is it a surrogate for a wider European security community that includes Russia and other states that are currently non-NATO members. Many NATO member states are sufficiently challenged domestically to maintain their own political freedoms and democratic safeguards against internal, not external threats. The toxic combination of populism, nationalism, polarization, media mendacity, educational mediocrity, and extremism will sink the “Free World” into an abyss of anti-democratic self-destruction without any help from outside enemies. Therefore, the United States and its NATO allies must be aware and plan for the likelihood that Putin (and other challengers) could select a mixed bag of “gray zone” warfare tactics that maximize the benefits while minimizing the risks for Moscow. Russia will likely try to combine diplomatic, informational, military, economic, and political-psychological measures to keep the United States and its allies off balance, politically confused, and militarily underprepared. Even as Russian troops continue to amass on the Ukrainian border, that is the real threat to the United States and its NATO allies.

Lawrence J. Korb is a Senior Fellow at the Center for American Progress and a former Assistant Secretary of Defense.