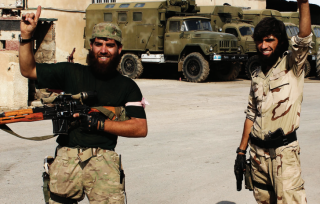 The conventional wisdom in Washington is that Tehran regards Sunni-jihadist movements as ideologically incompatible rivals. This is not surprising, as the bulk of Sunni-jihadist literature makes it clear that Shia-majority Iran is considered to be the embodiment of apostasy. To most Sunni jihadists, including those from ISIS, Iran is an archenemy surpassing both Israel and the United States.

But history shows that despite this fault line, Tehran has been willing to turn a blind eye to the militancy of Sunni jihadists. That is, as long as Iran was not the target. In fact, there is plenty of evidence to show that although they often fought jihadists, they also at times enabled and even encouraged Sunni-jihadist militancy.

Iran’s Supreme Leader, Ayatollah Ali Khamenei, is emphatic: there will be no Iranian cooperation with Washington in the fight against the Islamic State (also known as ISIS) in Iraq. To many, this is a huge setback for the nascent anti-ISIS coalition. After all, Iran’s considerable leverage among Iraq’s Shia and Kurdish communities and its vast intelligence operations in that country make it a critical player.

But just because Tehran has not been invited to be part of the twenty-six-country coalition against ISIS does not mean the Iranians are going to be uninvolved. In fact, the stakes are very high for Tehran. ISIS not only poses a threat to its geopolitical interests, but its unapologetic anti-Iran and anti-Shia campaign represents a new chapter in Tehran’s checkered history with Sunni jihadists. Iran’s internal stability could even be at stake.

Last week, Tehran announced that it had arrested Afghan and Pakistani citizens transiting through Iran to join ISIS. Such overt and public intervention against Sunni jihadists is a departure from past Iranian behavior.

Tehran fought the Taliban and its Al Qaeda allies tooth and nail in Afghanistan from 1994 to 2001. But it adopted a soft approach toward Al Qaeda operatives during most of the 2000s. It put fleeing Al Qaeda operatives it captured under house arrest, exchanging them when necessary. In 2010, the freeing of an Iranian diplomat kidnapped in Pakistan most likely came after Tehran struck a deal with Al Qaeda.

When opportune, Tehran even tolerated Sunni jihadist activities on its soil. For a while, Tehran let operatives from Ansar Al-Islam, an Iraqi Kurdish offshoot of Al Qaeda, set up camp in Iran after they fled the American military in Iraq. These Kurdish jihadists were deemed as leverage against the United States. The Iranians only turned against Ansar AI-Islam when the group targeted Iran.

Regional circumstances and safeguarding its interests, not ideology, have historically shaped Tehran’s approach to extreme Sunni militants. The rise of ISIS, however, is upsetting this blueprint.

In recent weeks, there have been ample of reports in Iran about ISIS operating in the country. While some top officials in Tehran have been forced to repeatedly dismiss these reports about IS infiltration inside Iran, other official accounts speak of ISIS infiltration. There have, for example, been a number of unconfirmed reports about some Salafists in Kurdish-populated regions of Iran declaring allegiance to ISIS.

Regardless of the veracity of these reports, there is no doubt that the authorities find it necessary to give repeated reassurances. They are increasingly anxious, not about ISIS fighters bursting across the border with Iraq, but about the group’s message finding a foothold among Iran’s Sunni minority.

On September 11, the head of the Iranian police force, Brig. Gen. Esmail Ahmadi Moghaddam, categorically rejected reports that ISIS sympathizers inside Iran had been collecting funds for the group. “We have not seen any fundraising for [ISIS] inside Iran’s borders,” he said.

But another top official, Iranian Deputy Interior Minister General Hossein Zolfaqari admitted that a few people attempted to help ISIS, but did not succeed in doing so. Meanwhile, Iran’s Interior Minister Abdol-reza Fazli announced that ISIS has attempted to recruit Iranians “through propaganda on the Internet, and even contacted some people.”

All this suggests that the Iranian authorities are alert to an ISIS presence inside Iran, but believe the threat can be neutralized. And that’s why Tehran’s emphasis on taking the fight to ISIS inside Iraq makes plenty of sense. It keeps an allied government, the Shia-dominated central government in Baghdad, secure. Its military intervention has even made the Iraqi Kurds thankful to Tehran. Above all, the Iranian strategy can contain the threat of ISIS fighters to the other side of its border with Iraq.

Meanwhile, there is little evidence that the dangerous ideology and methods of ISIS have anything but minimal traction among Iran’s large Sunni minority. There is no doubt that many Iranian Sunnis, particularly those living in Iranian Kurdistan and Balochistan, have grievances against the Shia-centric central government in Tehran. But they don’t seem to be turning to ISIS as the answer.

Nonetheless, as the Iranians continue to fight ISIS in Iraq, there appears to be good reason for introspection as far as the state of Sunnis in Iran is concerned. The almost panic-stricken response to reports about ISIS finding a foothold inside Iran shows that officials in Tehran do recognize that more can be done to alleviate grievances that local Sunnis have about life in the Islamic Republic.