Iran’s Islamic Revolutionary Guard Corps Must Be Dismantled, Not Delisted 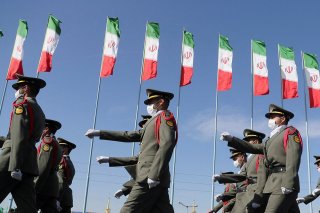 The Biden administration’s feverish pursuit to resurrect the 2015 Iran nuclear agreement is grounded in the false hope that the Iranian regime’s behavior can be modified by making more and more concessions. Tehran’s rulers have a perfect record of non-compliance with every agreement during their four decades in power.

One major concession reportedly being considered by the Biden administration is lifting the Iranian Islamic Revolutionary Guard Corps’ status (IRGC) as a designated Foreign Terrorist Organization (FTO). Such a concession would foolishly accept assurances that the IRGC will change its behavior and stop using terrorism as an instrument of national power.

Optimism for a deal has waned slightly in recent days, with State Department spokesman Ned Price declaring that the United States is “preparing equally” for scenarios in which the agreement is revitalized or collapses altogether. For some critics of the ongoing negotiations, this appears to be a tactic to demonstrate to Congress that the administration has, despite all evidence to the contrary, taken a firm stance in the negotiations. Since Iran rebuffed a draft agreement that was reported to be almost 100 percent completed in February, it has become increasingly clear that the accord’s revival would depend upon unjustifiable concessions to Iran’s regime, particularly those affiliated with its hardline paramilitary organization, the IRGC.

Since Iran’s lead negotiator returned to Vienna following what was then assumed to be his final consultation with his masters in Tehran, the regime has aggressively pushed to remove the IRGC’s designation as an FTO—a designation long overdue when it was made in 2019. The designation is justified due to the IRGC’s well-established involvement in terrorist attacks dating back to the 1980s, backing of Iraqi militant attacks on U.S. personnel, support for Syrian dictator Bashar al-Assad, and a plethora of other malign activities that have cost the lives of hundreds of American servicemen.

The IRGC’s activities were detailed in a report released last month by the National Council of Resistance of Iran, which sought to explain “why Tehran wants the IRGC off [the] U.S/ terror list.” It explained that “the FTO designation has handicapped many … IRGC-related foreign financial transactions,” adding that U.S. strategy could have been even more effective had it been “augmented by other punitive measures and sanctions.”

It is shocking that the White House would even consider making a concession of this magnitude to a regime that relies on the IRGC to use terror as an instrument of national power. It must be treated for what it is: a terrorist organization. The IRGC cannot and will not change its behavior.

Even while reaffirming that an agreement is neither imminent nor inevitable, Secretary of State Antony Blinken and Special Envoy for Iran Robert Malley have not been willing to rule out the prospect of removing the IRGC’s FTO designation. The Biden administration has been unclear in defining what Tehran might offer in exchange for a delisting concession. Some reports indicate the White House would want a commitment that the IRGC’s regional behavior would change, at least where specific U.S. interests are concerned.

This would be an absurd request on two counts. It naively ignores the Iranian regime’s record of violating its commitments, and it would fundamentally suppress the truth about the IRGC’s purpose. A paramilitary organization that no longer involves itself in a broad range of regional conflicts or seeks to undermine U.S. interests would no longer be the IRGC. Terrorism is in the very DNA of the institution.

What kind of message would removing the IRGC’s listing as a designated terrorist organization send to friends and foes alike? How can we hide from the IRGC’s role in terrorist attacks on the Marine Corps barracks in Lebanon, Khobar Towers in Saudi Arabia, and others in Syria and around the world?

Designating the IRGC as a terrorist organization was a vital first step. Now, it falls to the Biden administration and America’s European allies to coordinate a strategy to multilaterally enforce all associated sanctions and conclusively undermine the Guards’ regional force projection and domestic power.

The latter goal is especially important in light of the fact that the Islamic Republic has seen eight uprisings against the theocratic dictatorship since the end of 2017. In November 2019, during the largest of these uprisings, the IRGC played the principal role in a crackdown that killed no fewer than 1,500 people. Remarkably, this did not stop the Iranian people from protesting and taking precise aim at the IRGC and its influence over foreign policy. In subsequent demonstrations, “Resistance Units” burned images of Qassem Soleimani, the late commander of the IRGC’s foreign special operations wing, the Quds Force, even as regime authorities attempted to portray him as a national hero in the wake of his death at the hands of a U.S. drone strike in January 2020.

There are promising signs that the Iranian people will continue to stand up against the IRGC. The FTO designation sends a message of solidarity to the Iranian people. Delisting the IRGC would send the opposite message in and outside Iran.

If the White House is seriously considering giving into Tehran’s demands, it should understand that by doing so, it would be turning its back on both U.S. national security interests and the Iranian people.

David R. Shedd is the former Acting Director of the Defense Intelligence Agency.