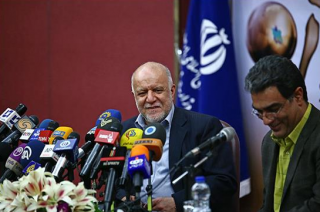 As the June 30 deadline for a nuclear deal between Iran and the P5+1 approaches, the world is eagerly following the fortunes of political moderate figures in Tehran. Can the Cabinet of President Hassan Rouhani overcome any last-minute roadblocks put up by hardliners in either Tehran or in Washington? One member of Rouhani’s cabinet, Minister of Petroleum Bijan Namdar Zangeneh, is arguably more vested than anyone else in hoping for a positive result from the talks.

Given the ongoing differences, the final outcome of the nuclear negotiations remains to be seen. But there is no doubt that the splits inside Iran about the future of the country’s foreign policy direction, including the size of concessions to be agreed to as part of a permanent nuclear agreement, is hotly contested among figures associated with two main groupings—moderates and hardliners—in Tehran.

A graphic example of this was captured on video this week when foreign minister Javad Zarif found himself in a scuffle on the floor of the parliament. He was berated and labeled a traitor by a well-known hardline parliamentarian, Mehdi Kouchakzadeh, for his handling of the nuclear negotiations. But while Rouhani and Zarif capture most of the media attention among the moderate wing of the Iranian state, it is Zangeneh as one of the principal architects who is tasked to prepare the ground for the eventuality of a deal, the removal of international sanctions and the rehabilitation of the badly damaged and yet strategically vital Iranian energy sector.

Zangeneh is in his job today because he is widely seen to be Iran’s top oil man. And given that oil exports, and the expanding natural gas sector, are the mainstay of the Iranian economy, his stewardship will be critically important as long as he can stay in the job. But he is assured plenty of scrutiny from those who are suspicions of him. When Rouhani first nominated Zangeneh in August 2013, the pushback was swift. He was not one of the three nominees to be rejected by the Majles, where hardliners have a majority thanks to Iran's candidate vetting process that hugely favors hardliners. As was expected, however, Zangeneh’s margin of support among the parliamentarians was on the narrow side.

The hardliners see Zangeneh as a relic left over from the moderate presidencies of Ali Akbar Hashemi Rafsanjani (1989-1997) and Mohammad Khatami (1997-2005), two men that are today defined by the hardline faction as the intellectual heart of the moderate movement in Iran that champion political reform at home and the return to the international mainstream.

That Zangeneh was a campaign advisor to Mir Hossein Mousavi, the leader of the Green opposition movement who has been under house arrest since 2009, make hardline suspicions of the oil minister that much deeper. As one hardline parliamentarian put it during Zangeneh’s nomination process in 2013, “his thought process and his relationships with those in the sedition movement [opposition] cannot be forgotten.”

At first Zangeneh pushed back and particularly confronted anything associated with the policies of the Mahmoud Ahmadinejad administration (2005-2013) as deplorable amateurism. The oil industry, he kept repeating, is a business for grown ups. But then Zangeneh pulled back and opted to stay focused on practical matters concerning the health of the Iranian energy industry. That was, after all, why he got the cabinet job and Supreme Leader Ayatollah Ali Khamenei’s blessing.

Ambitious goals and a steep climb

Once back in the oil ministry, where he had last served as a minister between 1997-2005, Zangeneh made top-level personnel changes. Then he set out to make his ministry a priority to be cultivated for the long-term health of the Iranian economy as opposed to acting as a cash cow for populist policies as had been the case during the Ahmadinejad presidency.

“The oil industry needs financial resources,” he insisted and issued warnings of dire consequences for the economy unless the grip of international sanctions is not removed. Thanks to sanctions, the Iranians today claim the country's tankers are today storing over 50 million barrels of oil products at sea while waiting to deliver to potential customers.

Nonetheless, Zangeneh speaks mostly in upbeat terms. At the recent 2015 Energy Security Summit in Berlin, he said Tehran is planning to increase its oil production to 3 million barrels per day once sanctions on the country are removed. The aim to regain what Iran has lost due to sanctions is understandable, but the financial and infrastructural challenges are on an intimidating scale.

Iranian official say the country plans to invest $180 billions to renovate its oil, gas and petrochemical industries by 2022. Such targets can only be met if Iran can reach a nuclear deal and open the door for foreign investment. For now, all that Zangeneh’s ministry can do is to prepare new and more attractive draft contracts to be presented to potential interested foreign companies. The good news is that with some 9 percent of the world’s oil reserves and 18 percent of its natural gas, Iran is hard to ignore for any energy company if the price of doing business with it is manageable.

Meanwhile, it remains to be seen if other regional oil producers have any sympathy for Zangeneh’s agenda. During the 20th International Oil, Gas, Refining and Petrochemical Exhibition held in Tehran in early May, Zangeneh asked the other oil producers to allow Iran regain its lost market share. It is, in Zangeneh’s words, Iran’s “right” to be able to do so.

Still, he has been mostly subtle in criticizing those countries that have “flooded the market with crude products” and has kept the door open for dialogue. Like his counterpart in the Iranian foreign ministry, Zangeneh is particularly focused on Saudi Arabia. It is in Riyadh where the Iranians face the sharpest disagreements over anything from oil price policy inside OPEC to regional rivalries from Syria to Iraq and to Yemen. And yet the rewards are also greatest here in the event of some kind understanding between the two regional rivals.

But don’t expect Zangeneh to veer away from the consensus in Tehran on the question of Saudi Arabia. Thanks to the Tehran-Riyadh fallout over the civil war in Yemen, Saudi policy is most likely closely coordinated in the Office of the Supreme Leader. It is unlikely that President Rouhani and his oil minister will want to or will be able to touch this red line of Ayatollah Khamenei. They have to wait for the supreme leader’s cue on what to do next vis-à-vis Riyadh.

And Zangeneh, like his boss, the president, knows full well he can go farther with his plans for the Iranian energy industry if he avoids unnecessary political fights. He has been careful not to openly confront the hardline generals in the Islamic Revolution Guards Corps (IRGC) who through their contracting subsidiaries have become big players in the domestic energy scene. On foreign policy, he said in Berlin that Iran does not intend to target Europe for its future natural gas exports but will prioritize Asian market. This was a deliberate wink at Moscow and its growing number of backers in Tehran and a suggestion the Russians need not fear a more competitive Iranian energy industry. In other words, he is an accomplished technocrat with a good sense to pick his fights carefully.

As Zangeneh put it recently, “the great leader [Khamenei] has provided the [Rouhani] government with a historic opportunity to expedite its economic programs.” In fact, Khamenei has never given the Rouhani government such a blank check. Iran’s supreme leader leader very rarely hands out categorical support for anything as he loathes as being associated with policies with even a remote chance of failure. For now, Zangeneh can restructure the industry at home, attend international energy conferences and prepare enticing contracts for potential foreign investors. But the bulk of his efforts will be in vain unless there is a nuclear deal: the sooner the better for the Iranian economy and its once mighty energy industry.

Alex Vatanka is a Senior Fellow at the Middle East Institute in Washington D.C.