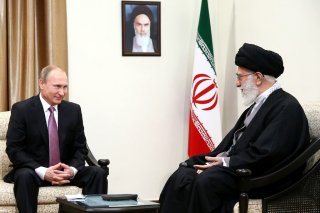 In their first in-person meeting on January 19, 2022, Iran’s Ebrahim Raisi and Russia’s Vladimir Putin displayed their commitment to stronger bilateral ties. In tandem with the exchange between the presidents, Iran’s oil minister announced that Tehran and Moscow had made strides in commercial agreements across the energy, transportation, and banking sectors. However, the most noteworthy takeaway from Raisi’s visit to Moscow was his presentation of a draft twenty-year cooperation agreement between Iran and Russia. The deal, intended to update an earlier economic cooperation pact from 2001, proposes increased collaboration in security, transportation, and trade initiatives between Tehran and Moscow. The agreement is still being negotiated, and the Iranian government states that its contents must first be made public and approved by parliament. The twenty-year cooperation agreement has been in consideration since last year, and while Iran has succeeded in gauging Putin’s interest in a deal, it may not materialize in the immediate future. In the interim, however, the prospective agreement is valuable because it signals both Tehran and Moscow’s convictions in their negotiations with the West.

Iran and Russia are both at a crossroads concerning their regional geostrategies. On February 8, Iran’s delegation headed back to Vienna for the eighth and possibly final round of talks to negotiate a revival of the Joint Comprehensive Plan of Action (JCPOA). Unlike conventional agreements, the JCPOA was conceived out of mutual mistrust, and Iran fervidly seeks guarantees that Washington will not renege on its commitments as it did in 2018. Iran also remains adamant about removing all sanctions in exchange for nuclear compliance, a demand that European officials seem to consider excessive.

As one of the nuclear deal’s more constructive signatories, some see Russia as Iran’s “lawyer” in the renegotiation process. The Vienna talks resume as Russia enters its own negotiations with the West via French president Emmanuel Macron. Russia is currently embroiled in a standoff against NATO and Ukraine. With over 100,000 Russian troops surrounding Ukraine’s borders, Putin has expressed his concerns over what he considers NATO’s encroachment on Russia’s western flank. In the coming days, Tehran and Moscow’s diplomatic approaches with the United States and its European counterparts will significantly impact the prospect of de-escalating tensions in Eastern Europe and the Middle East. However, both countries remain committed to pursuing their best self-interests, and the twenty-year cooperation agreement may have significant implications in this process.

The Iranian government has focused on advertising the economic and security benefits the Iran-Russia deal may have. Russia currently comprises 4 percent and 2 percent of Iran’s imports and exports, respectively. Tehran intends to increase its trade volume with Russia to $25 billion. This goal may seem overly ambitious, but in 2007, Iran envisioned its trade with Russia to reach $200 billion within the next decade. However, bilateral trade peaked at just over $3.5 billion in 2021. For comparison, Russia’s annual trade with Turkey ranges between $20 billion and $25 billion. U.S. sanctions act as the main impediment, constraining Tehran’s commercial prospects and complicating any long-term commitments from its trade partners. Aside from its direct commercial interests with Russia, Iran also seeks to secure broader economic commitments vis-à-vis the Eurasian Economic Union. In their face-to-face meeting, Putin expressed his support to Raisi for a free trade zone between Iran and the economic union. Raisi looks to such financial breakthroughs with hopeful eyes amid the skepticism over sanctions relief.

In addition to its economic potential, Iran views the twenty-year agreement as a way to solidify its security cooperation with Russia and secure new arms deals. Having held a trilateral naval exercise with the Russian and Chinese navies on January 21, Iran favors increased military collaboration to show a semblance of defensive solidarity with its foreign backers. Tehran reportedly seeks to purchase Russian-made Su-35 fighter jets to revamp the Iranian air force. The Raisi administration is also interested in procuring the S-400 missile defense system. While the UN Security Council embargo that barred weapons exports to Iran expired in late 2020, Russia has refrained from offering any deals to Iran. One motivation is that Tehran may not have the funds necessary for such deals. Since President Donald Trump’s withdrawal from the JCPOA, Iran’s foreign currency and gold reserves have substantially decreased. Iran had planned to acquire $10 billion worth of Russian arms, but its dire financial situation has convinced some analysts that any defense contracts with the Kremlin may peak at just $2 billion. The cooperation agreement could enable Iran to attain favorable terms over its oil and gas sectors in exchange for larger discounts for Russian weapons. But the cost is not just financial, as Russia maintains close ties with Iran’s regional rivals, including Israel and Saudi Arabia. Putin will not risk an imbalance in his relationships with the Middle East’s strongest powers. Not everyone in the Kremlin sees a direct security benefit from a long-term deal with Tehran.

The prospect of the twenty-year agreement has its fair share of supporters and critics in Iran as well. The deal resembles a twenty-five-year cooperation pact with Beijing that recently became operational. While some support an Iran-Russia deal to diversify Tehran’s commercial dependence away from China, critics fear extraterritorial concessions reminiscent of those made to the Russian government during the Qajar period. For example, Russia’s Gazprom and Transneft recently secured the largest stake in Iran’s newly uncovered Chalous gas field. Russia estimated that the gas field could supply 52 percent of Europe’s needs over twenty years. Two Chinese corporations will share 28 percent of the supply, while the residual output of the gas field will go to Iran’s KEPCO. Therefore, some critics believe Iran may sacrifice its long-term economic potential for short-term financial alleviation.

The difference in Iran and Russia’s geopolitical interests raises questions over the extent to which a twenty-year agreement would strengthen the countries’ security, economic, and industrial collaboration. But even if a deal is expected to have few tangible benefits for either side, the prospect can give Tehran and Moscow the political leverage they seek in their negotiations with the West. The common factor between these two countries is their ongoing dialogue with the United States and its allies. If the situation in Ukraine is exacerbated, Putin may look past his reservations over fully committing to Iran in a bid to pressure the United States and its NATO allies from a different front. The Kremlin may also use the threat of arms sales to Iran as political leverage in the negotiations over Ukraine. As such, a twenty-year agreement may not offer an actual weapons deal, but the threat of one can be deployed as a bargaining chip. Likewise, Iran could use the agreement to signal it will not shy away from alternative strategies should the United States sustain economic sanctions. Raisi will not wait for the nuclear deal to determine how the rest of his presidency will go. Concerning the separate negotiations between Iran, Russia, and the West, the potential of a twenty-year Iran-Russia pact is perhaps more significant for the West than it is for Iran and Russia themselves.

Arash Toupchinejad is a Junior Research Fellow at the NATO Association of Canada and an MSF Candidate at Georgetown University. He is also a columnist for the European Student Think Tank. His research spans the impact of geoeconomics and geopolitics on foreign affairs. His primary interests span the history and politics of Eastern Europe and the Middle East, as well as the neorealist school of thought.