Iran to Benefit from U.S. Equipment Military Left in Afghanistan 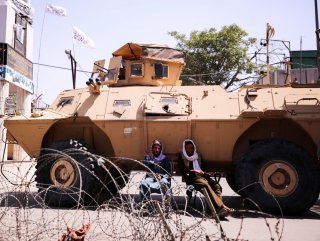 Back when American officials thought Iran would remain an important ally, Iran bought sophisticated arms and defense equipment from the United States for both political and economic reasons. In fact, Iran was the largest single purchaser of U.S. military equipment before the Islamic Revolution in 1979, and U.S. military sales to Iran increased dramatically between 1972 and 1976. But since the Islamic revolution, Iran has been sanctioned by major powers and has not purchased modern equipment from the West.

Some analysts believe that the collapse of the Afghan government, the Taliban takeover, and the U.S. withdrawal have created an opportunity for Iran to pursue its regional goals in Afghanistan.

Based on unofficial reports, Iran purchased Humvees and MRAPs (light armored vehicles) from the Taliban for research and reverse engineering.

“We are left wondering if the Biden Administration has a plan to prevent the Taliban from using our weapons against the U.S. or its allies, or selling them to foreign adversaries, like China, Russia, Iran, or North Korea,” the lawmakers wrote.

In addition, former President Donald Trump stated that “all equipment should be demanded to be immediately returned to the United States, and that includes every penny of the $85 billion dollars in cost.”

While Iranian and American authorities have not yet commented on the images, it is clear that they amount to a new blow for Biden.

Some observers believe that the Taliban will need an influx of foreign money to boost the war-torn Afghan economy. Selling off some of their new trophies and assets could provide the Taliban with the funds necessary to run Afghanistan’s public sectors and rebuild the country’s infrastructure.

“Iran probably made deals with the Taliban to buy some of these vehicles and equipment for research and reproduction purposes. So if American helicopter and airplane parts get into the hands of the Iranian government, it will be life-changing for military aircraft development,” wrote Goran Kesic, an intelligence analyst, in a social media post.

Although the commander of U.S. Central Command, General Kenneth Franklin McKenzie, Jr., asserts that U.S. aircraft left in Afghanistan are inoperable and will never fly again, they could still be useful for reverse engineering by Iran or other American adversaries.

Months before the collapse of the Afghanistan government, Iran ramped up its diplomatic outreach to the Taliban. Some reports assert that Iran has provided military support to the Taliban in a bid to accelerate America’s withdrawal from the country. Tehran has denied such claims.

“Iran has provided the Taliban with financial support and training,” said a senior defense intelligence official during a Pentagon news briefing about a Defense Intelligence Agency (DIA) report on Iran.

Some reports suggest that in recent years, Iran and the Taliban have worked together and independently against their common American enemy. If this cooperation continues, it should be expected that some U.S. military equipment, rendered useless or not, will be delivered to Iran for reverse engineering.

According to Taliban officials, 2,000 armored vehicles, including U.S. Humvees, and up to forty aircraft—potentially including Black Hawk helicopters, scout attack helicopters, and military drones—are under the extremist group's control.

However, it remains to be seen if American weapons will fall into the hands of other armed groups such as Al Qaeda—the terrorist nemesis of the United States—and if the Biden administration has a plan to prevent these weapons from being used to harm U.S. national interests.