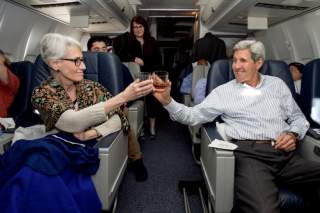 Many proponents and skeptics of the Obama administration’s deal to constrain Iran’s nuclear efforts assess it in absolute terms, as either closing the door on Iranian nuclear weapons or paving the path toward their inevitable acquisition. But what the deal fundamentally does is buy time. Therefore, even more important than the nitty-gritty of the deal’s provisions is a strategy for using the time we are buying to best effect. And our past behavior in similar circumstances is less than reassuring.

The Iran deal buys time in several important ways. It slows, and in certain respects temporarily reverses, Iran’s steady march toward a latent nuclear weapons capability; that is, the ability to make the key ingredients for a bomb on short notice. For the next decade, it caps both the quantity and quality of Iran’s centrifuges. For the next 15 years, it severely limits how much uranium the country can possess. These and other provisions, some extending out to 25 years and some permanent, will be verified by an almost unprecedentedly intrusive inspection regime, which will also severely constrain Iran’s ability to make a near-term, undetected dash for the bomb.

So, for at least a decade and arguably significantly longer, we can breathe easier with the deal in place. But as constraints start to come off, we may find ourselves in a similar or even worse situation than the one that we have tried to negotiate our way out of. The situation may be worse because Iran can continue research and development, for example to improve its current relatively crude centrifuge technology, and put itself in a position to significantly bolster its capabilities as the deal’s strictures are relaxed.

The challenge of Iran’s growing latent nuclear capabilities is symptomatic of a broader problem. Under the 1970 Nuclear Non-Proliferation Treaty, non-nuclear weapons states can build nuclear capabilities, especially the ability to produce uranium or plutonium suitable for a nuclear weapon, without violating the letter of their treaty commitments. A growing number of states are either bolstering such capabilities or resisting efforts to forswear them, so perhaps the core nonproliferation challenge of the coming decades will be managing the dangers of a world of widespread and growing latency.

With regard to Iran, it might seem obvious that a deal is merely a first step toward a long-term process of managing the nuclear risks it poses. But Washington’s track record in similar situations is underwhelming. Our government tends to marshal tremendous resources toward the achievement of concrete objectives like the 1994 Agreed Framework constraining North Korea’s plutonium-production capabilities, then fail to capitalize on those breakthroughs, ultimately undermining them.

The North Korean situation is an imperfect analogy for Iran. But, as the chief negotiator for that agreement recently observed, “The United States and its partners must avoid the ‘problem solved’ mentality that inevitably follows landmark agreements. This mentality took hold in 1994 as senior officials moved on to deal with other foreign policy challenges while implementation, left in the hands of lower-level bureaucrats, suffered.…This does not excuse the North’s behavior, but it does show these deals require constant attention.”

These are not arguments against the deal, and skeptics of the deal must articulate a better strategy. Military strikes would also buy time, albeit only a few years, and at the cost of driving the program underground and strengthening the very hardliners in Iran most likely to push for a bomb. Anyone advocating bombing must answer the far harder question of “bombing and what?” What strategy could the United States pursue to take advantage of the limited window bombing would provide and overcome the far worse circumstances it would generate? Bombing advocates have mostly been deafening in their silence on these far thornier questions.

Sanctions could be continued, but on their own have little ability to curtail Iran’s nuclear activities, and as with Saddam’s Iraq in the late 1990s, would inevitably begin to fray. The current sanctions are so punitive not because of the United States, which has had little trade with Iran since the 1979 Islamic Revolution, but because of states like Germany, China, and Russia, all of whom pay a major price for their participation and are eager to reinvigorate trade with Iran.

So how, exactly, should we take advantage of the time the deal buys? Procedurally, whatever interagency group is tasked with overseeing implementation of the deal should also be tasked with these broader issues. In the absence of such a mandate, we risk narrowly focusing on implementing the letter of the deal, and perhaps even compromising on broader issues in the service of the more narrow technicalities of the deal. Substantively, it is much easier to “admire the problem,” as my former Pentagon colleagues sometimes characterized meetings, than to put forward robust solutions to it. But a viable approach will require continued engagement with Iran, regional states, and international partners to work toward preferred outcomes while hedging against the least favorable ones.

Much can happen in a decade or two, and we may yet get lucky. Internal changes might moderate the regime’s behavior, regional rapprochement might ameliorate tensions, and global dynamics might shift in ways that made the Iran nuclear issue more tractable. But luck is not a strategy, and the United States needs the latter.

Dr. Philipp C. Bleek is Assistant Professor at the Middlebury Institute of International Studies at Monterey and Fellow at the James Martin Center for Nonproliferation Studies. He previously served as Senior Advisor to the Assistant Secretary of Defense for Nuclear, Chemical and Biological Defense Programs. The opinions expressed are his own and do not represent his current or past employers.