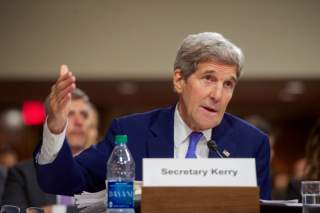 “It's a classic 'bait and switch,'” I read in a particularly astute tweet by Robert Kelner, someone I do not know, but who obviously knows a thing or two about negotiating. The idea, he explained in his 140 characters, is that you delay strong action pending a good deal, only to later announce that you had no choice but to accept a bad deal. Or, as the P5+1 often refer to it: a less than ideal deal. And the “switch” of course occurs at a stage when you have squandered the option of taking the strong action that could have helped to get the good deal in the first place. It can also be described as a kind of catch-22 situation. Unfortunately, too many people have fallen into the trap of agreeing that “there was no alternative.”

But there was an alternative: negotiating a better deal. And as difficult as the situation has become, there are still ways to mitigate the potential damage from the highly problematic agreement that was secured. But it requires first that people understand and accept that it is a deeply flawed deal, and that the narrative of “no alternative” is not and never was an accurate description of reality. Rather, it was always a political tactic to pull you in. It worked especially well with populations that are so frightened of the short-term implications of any military threat, that they are willing to close their eyes not only to the problems with this deal, but to the vastly more dangerous—and irreversible—longer-term implications of Iran acquiring nuclear weapons.

Much in this negotiation has turned on bargaining strategies. Iran was successful in achieving its goals in the negotiation—namely, to lift all sanctions, retain its breakout capability and gain international recognition and legitimacy for its vast nuclear program—in large part because it stuck to its narrative and its red lines. Iran simply refused to budge on anything of true significance to its goals, and even succeeded in squeezing out an eleventh-hour concession from the P5+1 regarding the arms embargo and sanctions on long-range missile development. All the while, the P5+1 refused to use the leverage that they had accumulated through the biting sanctions of 2012 in order to compel Iran to admit and give up its military ambitions. Nor did the P5+1 understand the real power of Iran’s consistent narrative that it has “done no wrong” in the nuclear realm.

You cannot succeed in a tough bargain if you do not understand and play according to its rules, including being willing to call the other side's bluff. The U.S. administration feared that if the P5+1 were tougher with Iran, the talks would have collapsed and Iran would have developed a bomb. But Iran was at the table because it desperately needed sanctions relief, therefore it would not really have let the talks collapse. Nevertheless, the P5+1 members convinced themselves that they had the weaker hand and could not risk such a move. By doing so, they actually turned that perceived weakness into reality.

And now U.S. officials are again twisting the facts and the alternatives. The administration is now trying to present its concessions as nonconcessions, especially regarding the issue of “anywhere, anytime” inspections. Just three months ago, these were the expressed U.S. aim, but now we hear that they were never real. Secretary of State John Kerry says he never heard of them during four years of negotiations, and chief negotiator Wendy Sherman says those statements were a “rhetorical flourish.” Kerry is also making serious mistakes when referring to Iran’s past advances, such as that in 2009, when Obama became president, he had to deal with 19,000 centrifuges spinning. Even today, that’s not the case.

With regard to the Congressional review of the deal, Kerry now says: "The fact is that the real fear of that region should be that you don't have the deal. If Congress doesn't pass this, if Congress were to kill this, then we have no inspections, we have no sanctions, we have no ability to negotiate." Really? It does not seem that Congress can “kill the deal,” because the administration rushed to have it approved first by the UN Security Council. But if Congress does voice its opposition, it would be a strong message that this is indeed a bad deal, and that in turn could perhaps garner support for efforts to at least improve mechanisms of dealing with Iranian violations. Indeed, Kerry's dire warnings are no more than scare tactics, meant to thwart any criticism of the deal.

Again, the alternatives are being manipulated, because that is the essence of bait and switch. So if Iran becomes a nuclear state, do not be surprised when you hear that the P5+1 did everything they could to stop it, but it’s better than the alternative. But wait, what alternative is that again?