On Iran: Don’t Let Bibi Sell Us Another War 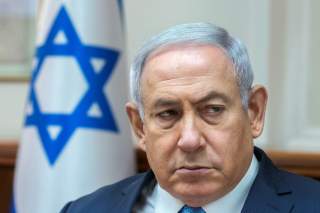 On Saturday, May 12, President Donald Trump will announce the most significant decision of his first sixteen months in office. Either he will withdraw from the agreement that stopped Iran’s nuclear advance in 2015, or alternatively, he will maintain what he believes is a “bad deal” while demanding that it be strengthened. As he has noted, this decision will not only impact America’s security but even more directly and immediately the security of our ally, Israel. As he considers this fateful choice, the president should ask less “what does Bibi think?” And more “what do Israeli security professionals advise?”

No matter how many times the press takes statements from Israel’s prime minister, as a peg to declare “Israel thinks,” Bibi does not equal Israel. On the issue of how best to meet Iran’s nuclear challenge, the views of a singular politician (who is currently struggling against serious corruption charges to stay out of jail), and those of the individuals who wake up each morning to address threats to Israel’s survival and security could not be more diametrically opposed.

Bibi is determined to kill the Iran deal. He opposed it when it was being negotiated, intervened in the U.S. Congress to attempt to derail it after it had been signed and has continued a campaign to undermine it. In contrast, one professional—who more than any other single person shoulders responsibility for Israeli security today—has repeatedly and courageously stated: keep the deal. As Chief of the General Staff Gadi Eizenkot, who commands the Israel Defense Forces, put it again last month: “Right now the agreement, with all its faults, is working and is putting off the realization of the Iranian nuclear vision by 10 to 15 years.”

On this issue, Eizenkot’s judgment is not exceptional. It reflects the virtually unanimous view of the “security barons” who have led Israel’s military and intelligence services. Last week, twenty-six former top-ranking military and security officials published a joint letter warning fellow citizens: “American abandonment of the agreement would undermine not just the deal, but Israel’s security as well.”

On what grounds can one reject the reasoning and conclusions of these professionals? Do General Eizenkot and his colleagues have illusions about Iran’s nuclear ambitions? Are they unaware of the evidence in the “atomic archive” that Bibi presented as a “revelation” in his recent theatrical performance? Are they soft on Iran?

Not on your life. But they have wrestled with the specter of a genuine existential threat to the state of Israel—something they see as 1000 times worse than all of security challenges Israel faces from Iran today. That would be today’s Iran armed with nuclear weapons.

They know that before the 2015 agreement between Iran and the international community, Tehran had advanced to less than a year away from its first nuclear bomb. They remember the critical role Israel played in these negotiations that forced Iran to roll back its nuclear advance. It posed the most credible threat of attack if that became the only way to stop Iran from getting the bomb.

They have developed and assessed the menu of potential Israeli strikes on Iran, estimated the consequences of Iran’s retaliation against Israel, and evaluated the likelihood of an extended war. For them, these are not abstractions on a PowerPoint presentation, but real choices with real consequences calculated in the blood of people whose names they know.

Will Trump be misled by Bibi’s sleight of hand? If so, will he condemn himself to the fate for which he castigated George W. Bush who followed Bibi’s advice in 2002 in launching a war against Iraq? As Bibi argued then, in a prequel to this week’s primetime special, invading Iraq would be the “good choice.” There was “no question,” he asserted, that Saddam was building nuclear weapons and would transfer them to the terrorists who attacked the United States on 9/11. He “guaranteed” that removing Saddam would have “positive reverberations” across the Middle East.

Fourteen years, 5,000 American lives, and $4 trillion later, as candidate Trump asked during the campaign: how did that work out?