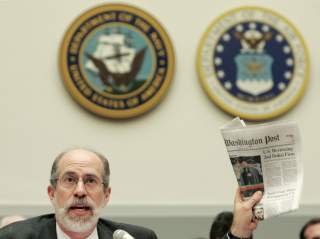 Frank Gaffney, the controversial former Reagan official and counterterrorism analyst, has waded into the debate over the Iran nuclear deal, on Friday touting a signed letter with forty-four other foreign policy hardliners urging the president to withdraw from the “deeply flawed” agreement. Not much of a surprise from Gaffney, a critic of both “radical Islamic terrorism” and the religion itself (full disclosure: Gaffney has also repeatedly and falsely, as The National Interest editor Jacob Heilbrunn, among others, has shown, attacked Grover Norquist, a member of the board of the Center for the National Interest, as an agent of the Muslim Brotherhood). More notable is that Gaffney and his Center for Security Policy explicitly backed a plan in this letter for exiting the deal written by former UN Ambassador John Bolton. The National Interest reported earlier this month that Bolton wrote the plan at the suggestion of none other than former White House Chief Strategist Stephen K. Bannon.

The plan is Bolton’s “alternative for POTUS that I requested,” Bannon told me earlier this month. “The signatories endorse Ambassador Bolton’s plan to implement this approach by withdrawing from the [nuclear deal] in coordination with America’s allies,” Gaffney and his co-signatories write. “The signers believe the Bolton plan is the best way to reverse the damage done by the reckless concessions that Obama officials made.” Not noted is that America’s allies, namely France, the United Kingdom and Germany, just spent last week trying to convince the American delegation in New York to stay in the deal.

But is the plan gaining steam? Among those signing the letter are Douglas J. Feith, the former undersecretary of defense for policy, and Lt. Gen. William G. Boykin, (U.S. Army, Ret.), the former deputy undersecretary of defense for intelligence. It could become the de-facto policy template for the administration if the president opts to begin the process of scuttling the deal. A former senior White House official told me earlier this month that Trump is more likely than not going to decertify the agreement next month.

But the plan would align Bannon, who has been called Trump’s dove and was deeply critical of the George W. Bush administration in his recent 60 Minutes appearance, with a veritable who’s who list of hawks and neoconservatives—on Iran, at least. Feith and Bolton are two of the Bush administration’s more colorful officials. When I visited Gaffney’s office in downtown Washington last month, the only framed photograph on display was a picture of him with Feith and Bolton.

The consequences of this are that Bannon would be on the same page with people he disagrees with on other foreign policy issues. Bannon told The American Prospect in August that he thought North Korea was essentially a distraction. He’s consistently backed the president up on trying to work more with Russia. But on Gaffney’s website, one can quickly observe that the Center of Security Policy espouses different stands. “Beijing Must Change Pyongyang’s Regime, Not Just Its Behavior,” reads one editorial by Gaffney. Another editorial, by Julia Sor, complains of a “Russian Air Raid on U.S.-backed [Syrian Democratic Forces].” But Bannon argued against Trump’s strike on Syrian President Bashar al-Assad’s forces in April.

For supporters of the Iran Deal, this is all obviously disconcerting news.

The overlap between Gaffney and Bannon on Iran “serves as further evidence of the role that anti-Islamic animus plays in in guiding the opposition of Bannon and others to the Iran deal,” says Sina Toossi, a researcher at the Woodrow Wilson School at Princeton. “Gaffney’s status as one of America’s leading Islamophobes dovetails with Bannon’s views of a civilizational conflict between the West and Islam.” This “will position the United States for more destructive entanglement in the Middle East—precisely the opposite of President Trump’s campaign promises.”

Scott McConnell, founding editor of The American Conservative, is withholding full judgment until Trump actually moves to decertify. “Honestly, I can’t gauge the relevance of anything” anymore, McConnell says, but he has been surprised by the general course of the president has taken on Iran.

“I took Trump’s aversion to W’s and the Beltway establishment foreign policy more seriously than I should have,” McConnell says. The president “is I think somewhat more dependent than anyone anticipated on neoconservative donors, because of his and administration’s looming legal bills. In that sense, the liberal push to prosecute Trump for ‘Russia’ might have some very illiberal consequences. In any case, he’s clearly listening to the hawks on Iran, not the realists. I doubt he could explain why.”

The remaining question is what influence Gaffney’s letter will have. A request for full comment to Bolton’s representatives was not immediately returned, as he is travelling, but his office was also quick to say that Bolton “has no idea” about the letter, downplaying the possibility of coordination between parties Gaffney, Bannon and the like. Gaffney told he fully denies a Washington Post story from November 2016 that stated he was an advisor to the president-elect’s transition team. And he told me—prior to Friday’s publishing—that he had been disappointed with the administration so far. The coming weeks, as Trump reveals whether or not he will advocate for decertification, will show if that is about to change.