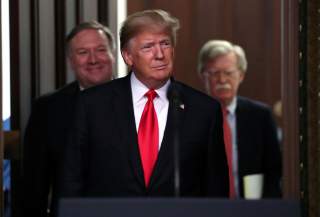 “Never mind that President Trump, Mike Pence, Mike Pompeo, Patrick Shanahan, and Bolton have not said a single word about a preemptive strike, much less a full-scale war, against Iran,” writes Matthew Continetti. “Never mind that the president's reluctance for overseas intervention is well known.”

Would that it were so simple. The president was less sparing Sunday evening: “If Iran wants to fight, that will be the official end of Iran.”

The recent weeks have thrust Iran center stage like it has not been since the Carter presidency. Two years of hawkish maneuvers by Washington—from putting Iran “on notice” in the first month after Donald Trump’s inauguration, to nullifying the Iran nuclear deal, to pressuring European firms to stop doing business with the regime, to designating its military a terrorist organization—have culminated now in something short of a hot war.

Are the American political and military establishments preparing for war? The government is no monolith. Neither are Iran hawks. The quietly influential National Council for the Resistance of Iran (NCRI), affiliated with the MEK and aligned with administration allies Rudolph Giuliani and Newt Gingrich, continue to insist the regime can be collapsed organically.

But if military action is taken, the most likely scenario remains that Iran is hit in the style Saddam Hussein’s Iraq was in 1998—a pinprick, punitive action that presumably stops short of regime decapitation. The Trump administration undertook such a course in Spring 2017 and 2018 as well—against Bashar al-Assad’s Syria.

Pro-administration hawks counsel that like Assad, the Iranians would accept their demerit, and essentially not respond. And if Tehran did—it would be proof positive that the Islamic Republic is unacceptably dangerous. Such a measure was called for in the editorial pages of Arab News last week. The publication is owned by the brother of Mohammad bin Salman, Saudi Arabia’s crown prince and a lynchpin Trump ally.

Continetti stands corrected. At least one senior U.S. official is open to such a course, should it come to it—Ambassador John Bolton, the national security advisor. Bolton, also an ally of the MEK, has nonetheless argued for a strike before. First, in his infamous 2015 New York Times piece, “To Stop Iran’s Bomb, Bomb Iran.” And more recently, in his 2017 audition essay in National Review, which, as I’ve reported, was written at the instigation of former White House chief strategist Steve Bannon. Per Bolton, a post-JCPOA would look like this: “With Israel and selected others, we will discuss military options.”

A former senior administration official argued to me Sunday that Bolton’s gone too far, just as the administration is winning over even its enemies on the China front: Sen. Mitt Romney praised the White House’s tariffs approach as reasonable Sunday. This former official, who favored leaving the JCPOA, said that it’s imperative to “Tell Bolton ‘no’ on Iran and Venezuela,” the administration’s parallel regime change project.

“Trump needs to keep Bolton and Pompeo on a short leash, shelve war talk, and engage in serious diplomacy,” Lt. Col. Daniel L. Davis of Defense Priorities said Monday. As I reported last week, there is daylight between Bolton and Secretary of State Pompeo, as well. Emphasized Davis: “Our [powerful military defense] keeps us safe no matter how talks go.”

Iran hawk reporter Eli Lake contends Bolton does not actually favor war: “He’s kind of a one-man psychological warfare operation.” Linking to the Venezuela example, Lake argues Bolton is a master bluffer: “I am told he deliberately brought a yellow pad to the White House podium earlier this year during a briefing on Venezuela that said ‘5,000 troops to Colombia.’ The idea was to persuade Venezuelan strongman Nicolas Maduro not to imprison or attack the opposition.”

Continetti and Lake are right about one thing: this is 2019 and Iran, not 2003 and Iraq. The Iran tack continues to lack the relatively unified execution of George W. Bush’s ousting of Saddam.

But that doesn’t mean it isn’t risky.