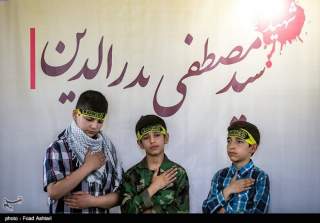 Mustafa Badreddine, the head of Hezbollah’s military operations in Syria, was recently killed in an explosion near Damascus International Airport. Although the assassination bears some signatures of an Israeli operation, the Shiite militia has blamed Sunni jihadists. Bogged down in Syria, Hezbollah and its Iranian patron have every reason to downplay Israeli responsibility, thereby lifting pressure to retaliate in kind and risk a war with the Jewish state.

Announcing Badreddine’s assassination on Thursday, Hezbollah media outlets initially blamed Israel. And in Tehran, Brig. Gen. Ahmad Vahidi, former commander of the Islamic Revolutionary Guard Corps (IRGC) Quds Force and minister of defense who now heads the armed forces’ think tank, the Center for Strategic Defense Research, said Friday, “The Zionists will receive the necessary answer at the right time.” When Hezbollah issued the results of its investigation into Badreddine’s assassination on Saturday, however, it claimed he was killed by artillery fire from unnamed Sunni jihadists. But attributing blame to the “takfiris” rather than the Israelis should be taken with a grain of salt.

Previously, when Hezbollah military leaders have been killed, the group immediately pointed the finger at Israel, threatening revenge and retaliating shortly afterwards. That was its response after both the January 2015 strike that killed Jihad Mughniyeh (the son of Badreddine’s predecessor Imad Mughniyeh) and the strike in December that killed arch-terrorist Samir Quntar. Though both had military roles, their importance to the organization was primarily symbolic. As a result, the organization’s need to save face within Lebanon could be satisfied with a relatively minor retaliation against Israel in the contested Shebaa Farms border area.

Badreddine, however, was different. His leadership role and storied career within the organization—arguably paralleling only that of his predecessor—necessitated a deadly response. He was also important to the Iranians, as his death prompted condolences from Foreign Minister Mohammad Javad Zarif and a visit from Quds Force Commander Qassem Soleimani to the slain commander’s family in Beirut on Sunday. According to several sources, Soleimani may have even been spotted beside Badreddine in Syria shortly before his death.

The chief of Iran’s Armed Forces, Major General Hassan Firouzabadi, also praised Badreddine as “a capable and model commander,” promising that “we the comrades of that mujahed commander” would continue his path. He fell short, however, of blaming the Israelis, as he knows that amid full-blown war in Syria, Hezbollah can ill afford a repeat of its devastating thirty-four-day conflict with Israel a decade ago.

There are other reasons to doubt Hezbollah’s official version of Badreddine’s assassination. For one, the group has reportedly requested that journalists remain silent on Israeli responsibility for the strike. Indeed, Hezbollah waited two days to pin the blame on Sunni militants—likely the result of deliberations with Tehran over how best to proceed. By contrast, when the elder Mughniyeh was killed in 2008, the group immediately blamed the Jewish state, threatening “open war” and warning it would assassinate Israeli leaders of equal stature.

This time, Hezbollah’s statement was ambiguously worded, apparently meant more to lay the issue to rest than accurately identify Badreddine’s killers. However, the group does not entirely let the Israelis off the hook. Its statement continues, “In any case, [this] is the same battle against the American-Zionist project in the region,” of which the takfiris are “the head of the spear.” Nasrallah once again stressed this linkage in his speech a week after Badreddine was killed, adding that Hezbollah was not entirely absolving the Israelis of his death.

For its part, the IRGC’s official weekly publication dedicated its front page to Badreddine, also claiming that artillery fire from takfiri groups had killed him. The eulogy continued that despite its “bitter” loss, the “Resistance would continue its fight against the “Zionists” and the “terrorist-takfiri front.”

Israeli intelligence sources have reportedly suggested that Hezbollah’s version of events was untrue, and the Britain-based Syrian Observatory for Human Rights said Sunni militants had not targeted the airport area with shells or explosives for over a week. The front line position of one of these groups, Ahrar al-Sham, is fifteen kilometers away from the airport, and Islamic State’s is over twenty kilometers away. Both lack missiles or artillery precise enough to strike targets at those ranges, making their responsibility even less likely.

While the Observatory could not identify who killed Badreddine, it is noteworthy that Damascus International Airport and its surrounding areas have been the scene of repeated Israeli air strikes against Hezbollah targets over the last two years. Moreover, Syrian regime military sources have said Badreddine was killed by a SPICE smart bomb—the same method reportedly used by Israel to assassinate Quntar. This version of events matches the pro-Hezbollah daily Al-Akhbar’s report that Badreddine was killed by a “guided missile.”

Top IRGC commanders have been more forthcoming about Israeli responsibility. On Saturday, Iranian Defense Minister Brig. Gen. Hossein Dehghan wrote a condolence letter to Nasrallah, lamenting that Badreddine’s blood was “spilled in combat against the Zionist regime and Islamic State mercenaries.” Brig. Gen. Rasoul Sanaei-Rad, political deputy to the IRGC chief, also accused Israel of cooperating with unnamed “Arab countries” to assassinate the commander and provide support to “takfiri groups.” Sanaei-Rad vowed, “The resistance will take its revenge from the Zionist regime before any group.”

The reluctance to blame Israel stems from the existential importance that Iran and Hezbollah, who are the leaders of the so-called “Axis of Resistance,” place on the Syrian war. In Nasrallah’s words, the conflict represents no less than Hezbollah’s supreme “existential battle.” Hezbollah has lost as many as a quarter of its six thousand fighters in Syria, and the Revolutionary Guard at least four hundred.

This priority attached to prevailing in the Syrian war is shaping the Hezbollah-Iranian narrative over Badreddine’s death. Either way, Hezbollah deputy chief Naim Qassem said Wednesday, its fight against the takfiris and against the “Zionists” are two parts of the same battle. In that view, Sunni groups are merely the front line of the Zionist-Saudi-American plot to destroy the resistance, and laying direct blame on the takfiris allows Iran and Hezbollah to capitalize on Shiite sectarian sentiment and fuel mobilization for the war they are fighting. This is particularly important after the IRGC suffered its heaviest defeat in Syria in the strategic town of Khan Touman, south of Aleppo, a week prior to Badreddine’s assassination.

With a major IRGC push anticipated soon in southern Aleppo, blaming Sunni militants for Badreddine’s death is tactically the wisest decision for Iran and Hezbollah. That is not to say that either will let entirely the Israelis off the hook. With its entire focus placed on winning the Syrian war, Hezbollah will add Badreddine’s assassination to the Israel’s “tab” of slain leaders, one which the groups intends to ultimately make them pay.

David Daoud and Amir Toumaj are research analysts at Foundation for Defense of Democracies. Follow them on Twitter @DavidADaoud and @AmirToumaj.