Iran: Khamenei and Rouhani Face Off on Culture War 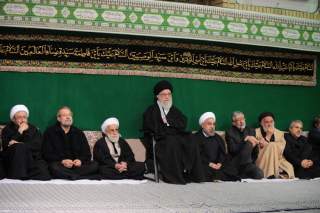 Political structures are the domains of scarce resources of power, wealth, knowledge and social class. Politicians and political groups fight over such resources. The fights are usually settled fairly in democratic societies. But, the fight over such resources in undemocratic nations is strongly limited to small groups of privileged people and senior officials, and does not include a broad cross section of the society.

This is particularly true about the Islamic Republic of Iran. Since its inception in February 1979, the political class has witnessed intense infightings over resources, and Hassan Rouhani’s presidency is no exception. His term began under the worst economic conditions over the past three decades. Deep recession and the economic sanctions that U.S. Secretary of Treasury Jack Lew has called “the most severe in history” have severely limited the government’s resources, and have forced Rouhani to not only cut the national budget, but have also made it possible to reduce the role of the Islamic Revolution Guard Corps (IRGC) in the national economy.

Senior IRGC commanders have explicitly criticized the Rouhani administration for not granting large economic projects to the force’s engineering arm, the Khatam-olanbia. In turn, Rouhani accused the IRGC of “demanding its share [of the national resources]” as if it is entitled to it. In response, the IRGC high command declared that Rouhani is pursuing a policy of transforming the IRGC to a “nonrevolutionary and conservative” military force.

Iran’s Supreme Leader Ayatollah Sayyed Ali Khamenei and his conservative supporters are angry about the political and cultural developments since the Rouhani administration took office. Thus, they are using the cultural arena to confront the government. The conservatives claim that Rouhani is “Westernized,” and is pursuing elimination of Islam from the public domain and staining the “pure” culture of the Islamic Republic with foreign thoughts and ideas. To see this, consider the following developments:

Founding of cultural command headquarters. In a meeting with the members of the Supreme Council of Cultural Revolution on December 10 of last year, Khamenei, emphasizing the government’s duty to lead and direct the nation in the cultural domain and “confront the destructive cultural issues,” likened the task to “a gardener protecting beautiful flowers” and said, “uprooting the weeds in a garden allows natural use of water, air and light [by flowers].” Criticizing the government in the same speech, Khamenei defended the founding of the cultural command headquarters by the hardliners.

In a meeting with Iranian artists on January 8, Rouhani responded to Khamenei, saying:

Dividing our artists into Arzeshi and gheir Arzeshi is meaningless [Arzeshi means value-laden, and is referred to someone who adheres to rigid interpretation of Islamic teachings and the supposed goals of the 1979 Revolution favored by the hardliners; gheir Arzeshi means those who oppose such interpretations]… Without freedom art is meaningless, and it is impossible to be creative without liberty… There is a direct link between freedom and art. True art will never be created in an unfree society. We cannot create arts by issuing decrees. In a national-security state art will not bloom, and as [Muhammad] Iqbal [the philosopher and poet in British India] said, ‘when a rigid brainless man takes control, art could not bloom.’ This administration does not intend to continue censorship in order to impede the work of artists. [Even] if we were to watch artists’ work, we must have a group of the elites, intellectuals, artists, and scholars, even religious scholars, to supervise and monitor the work. An artist can monitor another artist’s work, not a bureaucrat who can never do a good job of this. Why should we not ask the experts to monitor arts, books, and cinema? What would be the problem if civic organizations do part of the Ershad’s [Ministry of Culture and Islamic Guidance that currently monitors such things] work? The government does not write books, make movies, compose music, and write poems. The government must simply be a facilitator for the artists and intellectuals. We must trust arts and artists, because viewing them in security terms is the gravest security mistake… If we look at them [and their work] as a security issue, we will forget about the real security issues, and will also deter a true artist that can make us aware of the real threats.

The concerns of the Supreme Leader. On March 6, Khamenei met with the members of the Assembly of Experts (a constitutional body that appoints the Supreme Leader and supposedly monitors his performance). They expressed to Khamenei their concerns about the cultural state of the country. Khamenei agreed with them, saying:

Another problem is the issue of culture. Now that you have expressed your concerns, [I must say that] I too am concerned…We should pay attention to the culture; the respected administration [of Rouhani] must do so, and others too must pay attention. I share your concerns about the state of culture, and hope that our officials in charge of cultural affairs know what they are doing. Cultural issues are no joke. They cannot be ignored. If there is a cultural invasion [by the West], it would not be like the economic problems [that they have created for us] that can be addressed by helping the people. It [the damage] will not be easy to repair; it will be replete with difficulties.

Two days later, Rouhani responded to Khamenei during the ceremony marking the end of the annual press festival:

Undoubtedly, if pens are broken in a society and mouths are shut, the people’s trust will be ruined, and they will turn to foreigners’ press and mass media [to get information]. Let us have an open space for pens and people’s thoughts, so that all the facts can be explained to them… If pressure and a police state could have solved the cultural problems, we should not still be concerned about our society’s culture [but, we still are]….A government’s task is creating moderation [in the society]. Right from the beginning, the government believed and it still does, that cultural issues must be addressed by cultural people [not the government]; that is, by scholars, experts, and professional societies, through transparent laws. The most important force that can confront corruption is the [free] press at the forefront [of anticorruption drive]. The list of the corrupt people’s names must not be in the pockets of the country’s chief executive, but be revealed by the press and our journalists. If the press does this, not only can we confront corrupt people, but also prevent corruption. The cost of corruption must be increased, so that no one would dare even thinking about it, and the way to achieve it is by your [the press’] presence [in this confrontation].

Talking about cultural “weaknesses”. On March 21, Khamenei effectively gave the orders for cultural attacks on the government. He likened culture to air, saying, “Culture is like the air we breathe. You have to breathe air, whether you like it or not. If this air is clean, it will have certain effects on your body,” and claimed that, to destroy the nation, the “enemy” has focused on the culture by “targeting people’s beliefs and faith.” Thus, he said, “The officials in charge of cultural affairs should take care of cultural rifts, which are very dangerous. They should be sensitive about such rifts and be vigilant.” He then added:

Cultural experts have a responsibility in this regard as well. Who are cultural experts? Cultural experts include the ulama [grand ayatollahs], professors, revolutionary intellectuals and committed artists. They should preserve their critical outlook towards the cultural conditions of the country and provide guidance. I believe that the revolutionary community of the country can enter the arena and make criticisms with compelling logic. They can point to the weak and negative aspects. Sometimes, an official does not know what is happening in the society, but the young critics are at the society’ center. They know what is happening. This is the national determination and the jihadi management that we have discussed in the area of culture.

Since that speech, the fundamentalists, some of the conservative ayatollahs, and several IRGC commanders have been criticizing the government continuously.

Equality of rights of men and women. In a speech on April 19, Khamenei spoke about women’s advancements in the Islamic Republic. He rejected the notion that Iranian women should emulate their Western counterparts, claiming that in the West, women are treated as sexual objects and dismissed equality of men and women at their jobs. He also declared that “we should set aside this notion from our thoughts.”

Rouhani responded to Khamenei the next day. In a speech on the occasion of Women’s Day in Iran, he declared, “Women must have equal opportunity, equal security and equal social rights” with men. Then, on the May Day—Workers’ Day—Rouhani said, “I reject gender-based discriminations in the world of workers and production. Our working men and women must have equal rights.”

Books. Khamenei also advocated tight control of the government over books. Censorship of books has always been part of his cultural policy, although he has failed. But, Rouhani has advocated nonintervention by the state in this issue, and has repeatedly said that writers and readers are the best judge of what is acceptable. During the opening ceremony of Tehran International Book Exhibition, Rouhani said: