Iran Looks to Missiles and Drones to Regain Its Regional Edge 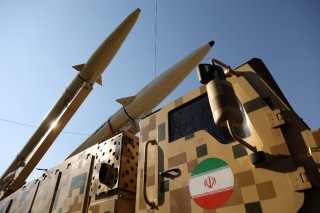 Many analysts argue that Iran’s influence over parts of the Middle East—often called the “Axis of Resistance”—has diminished since the assassination of General Qasem Soleimani of the Islamic Revolutionary Guards Corps (IRGC) Quds Force in January 2020. Examples backing this claim abound, including the appointment of Iraqi prime minister Mustafa al-Kadhimi, when Tehran lost its direct influence and role in appointing the Iraqi prime minister for the first time in fourteen years. In Soleimani’s absence, Mustafa al-Kazemi, a Washington-backed figure who opposes Iran’s presence in Iraq, took over the political scene. The same happened during the fifth Iraqi parliamentary elections in October 2021, when Muqtada al-Sadr’s Shiite faction, which opposes Iran, won more seats in the parliament than any other political party. Moreover, Hezbollah, Iran’s close ally, lost the Lebanese parliamentary elections in May 2022. Critics often state that Iran’s regional allies will face increasing challenges wherever elections reflect public opinion, suggesting that the Islamic Republic of Iran fails to exert its powerful influence in other countries in the absence of soft power. Therefore, in response to the Axis of Resistance’s political inability and declining power, and Iran’s diminished role in directing its forces in internal and regional developments, Tehran has begun to revise its deterrence structure.

Another factor is Israel, which introduced its “Strategy and Third-Circle Directorate” as its new strategy toward Iran in June 2020, five months after Soleimani’s assassination. This new strategy, which mainly focuses on the escalation of assassinations and small but effective military actions on Iranian soil, has greatly reduced Iran’s deterrence credibility. Israel’s strategy, set to be operational until 2024, intends to execute operations inside the Islamic Republic of Iran. The Strategy and Third-Circle Directorate can be considered a supplement to its mabam strategy, or Israel’s “campaign between the wars,” where, according to Israel’s security and military elites, any actions against Iran should be comprised of a long series of low-level attacks to change the state of the field without provoking a serious reaction. This strategy also applies to cyber attacks. Such strategies aim to place Iran in a polygonal dilemma, arguing that if Iran is unable to effectively respond to all assassinations, low-level military attacks, and small-scale but effective acts of sabotage, it will gradually lose its strategic position and deterrence credibility.

Because Iran may soon lose its full political and military control over the Axis of Resistance and Israel maintains the capability for a pre-emptive strike, Tehran has decided to have the Artesh (Iran’s conventional military forces) join the IRGC in developing the country’s missile and unmanned aerial vehicles (UAV) programs.

One week after Israel allegedly assassinated Hassan Sayyad Khodaei, a Quds Force commander, in Tehran, and four days after a drone strike on the Parchin Military Complex on May 25, Iran unveiled a secret underground drone base called the 313 Artesh Base in a ceremony attended by the commanders-in-chief of the Iranian Armed Forces and the Artesh. During this unprecedented event, the Iranian Armed Forces presented a number of the Artesh’s UAVs, including the Ababil-5 (equipped with a Ghaem-9 missile that functions similar to the American Hellfire missile); the Kaman-22 (with a service ceiling of 2,000 kilometers, equipped with a Haidar-1 cruise missile with a range of 200 km and a speed of 1,000 km per hour); the Karrar (equipped with a new generation of Shafaq missiles); and the Iran Aviation Industries Organization’s Fotros (equipped with Ghaem laser bombs, Almas rockets, and a high-explosive warhead), to demonstrate the Artesh’s determination in conducting new military missions against Israel.

One of the consequences of this new strategy is the increasing number of joint platforms between the IRGC and Artesh. For example, in October 2021, the Artesh and IRGC jointly held a “specialized air defense exercise” called Aseman Velayat Defenders 1400. Besides that, the Artesh’s April 2022 parade was an “official declaration of the repositioning of this military institution in Iran’s defense strategies and military organization.” Iran expert Abdolrasool Divsallar has noted how the parade demonstrated a change in the choice of the Artesh’s weapons systems, indicating a new preference for ballistic missiles and UAVs to fill the shoes of the old and declining Islamic Republic of Iran Air Force. During this ceremony, more than fifty combat, reconnaissance and suicide UAVs (including Kaman-22, Mohajer-6, Mohajer-4, Mohajer-2, Raad-85, Arash, Ababil-5, Sadegh, Shahed-136, and Yasir) were unveiled. Moreover, the systems involved in operating various missiles, loitering munitions, command and control posts, electronic warfare, surveillance and reconnaissance, and tactical communication relays were presented to the media. The presentation of several new tactical missiles, including Fath-360 ballistic missile, which were formerly put into operation by the IRGC’s naval and ground forces, and the unveiling of Labeik-1 ballistic missile, as an upgraded version of Nazeat rocket, demonstrate the Artesh’s gradual movement towards enriching its reserves of missiles and UAVs, thereby, playing a more prominent role in Iran’s deterrence structure.

While the Artesh still has a long way to go until it becomes a missile power similar to the IRGC, the introduction of ballistic missiles and suicide-combat UAVs to this military organization is an interesting and decisive development. On the other hand, although the Artesh still prioritizes air defense systems as its serious point of focus, it seems it will still pay more attention to tactical point defense, electronic warfare, and cyber capabilities in the near future. The Artesh’s new orientation, defined by missile deterrence and entering areas that were traditionally seen as the IRGC’s exclusive spheres of influence, greatly affects its flexibility and efficiency in future combat.

In addition to gradually bridging the arms gap between the IRGC and Artesh, Iran’s new policy enhances its direct deterrence in future conflict scenarios, which may involve Tehran’s fading regional influence and control over its proxy forces. Considering Iran’s lack of access to international weapons markets and the low chance of success in the current nuclear negotiations, this new strategy’s adoption means that the General Staff of the Armed Forces of the Islamic Republic of Iran is convinced that the best way to improve Iran’s organizational synergy and conventional deterrence is to equip the Artesh with ballistic missile units, combat and reconnaissance UAVs, and new air defense systems in addition to honing the country’s cyberspace capabilities. The most important point regarding the Artesh’s access to ballistic missiles and UAVs is that if these new capabilities are combined with those of the IRGC, the Iranian Armed Forces can access a more complete range of weapons capabilities. This emerging reality is backed by the increase in the number and diversity of military exercises conducted by the Artesh in recent years. This makes it possible for the Iranian Armed Forces to launch retaliatory attacks from deep inside Iranian territory even if their reliance on regional proxy networks and forces, who are only equipped with UAVs, rockets, and short-range missiles, is diminished.

Such a shift in Iran’s strategic orientation should be attributed to the dramatic rate of regional developments that have raised concerns in Tehran. This means that Iranian military elites are pessimistic about an Israeli pre-emptive strike and the future of proxy forces in the Axis of Resistance, which they may believe are not dependable for long-term deterrence. In other words, assuming that pan-Arabism in Iraq and Lebanon drives these nations more towards nationalism and independence from Tehran in their security and defense policymaking over the long term, and if a post-Bashar al-Assad Syrian government has no choice but to reconcile with Israel and exit the Axis of Resistance in order to get back the Golan Heights, ensure its territorial integrity, and persuade the United States to lift its economic sanctions, it is highly likely that Iran shifts to a direct deterrence strategy. Such a shift would require Iran to rely more on its massive missile firepower from Iranian territory rather than continue its current strategy of extended and asymmetric deterrence that has seen the IRGC strengthen the Axis of Resistance’s missile-based armaments across the region.

As the West and regional countries emphasize such a separation between Tehran and its non-governmental allies in the Axis of Resistance, and as Israel calls for the full withdrawal of Iranian troops from its periphery and gambles on assassinating Iranian scientists and commanders or attacking Iran’s strategic bases and facilities, the Islamic Republic of Iran will be increasingly determined to further engage Artesh in its regional defense equation by increasing the range and accuracy of its ballistic missiles and drones.

Masoud Rezaei is a senior visiting fellow at the Center for Scientific Research and Middle East Strategic Studies (CMESS) in Tehran. He has focused on Iran’s foreign and defense policy in the Middle East, Iran’s relations with great powers, and non-proliferation and arms control issues in the Persian Gulf region. Dr. Rezaei holds a Ph.D. in International Relations from the Islamic Azad University, Tehran Sciences and Research Branch (Isfahan). Follow him on Twitter @rezaeimsd