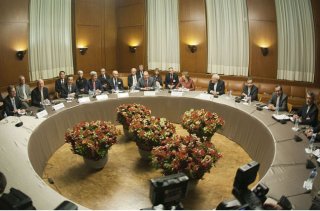 Here we go: the P5+1-Iran nuclear negotiations are entering the homestretch, with the parties set to negotiate continuously up until the July 20 deadline in an effort to secure a comprehensive nuclear deal. At this point, there are four possible outcomes: a good deal that will cover all of the problematic aspects of Iran’s nuclear program and largely dismantle Iran’s nuclear infrastructure; a decision to continue negotiations for up to six months; major P5+1 concessions that would result in a deal that does not cover all the problematic aspects of Iran’s nuclear program (a mediocre to bad deal); and an impasse or suspension of the talks due to a mutual sense that a deal is (currently) unachievable.

A good deal is quite obviously the best outcome for the international community and from Israel’s point of view as well—a decision to continue negotiations would basically keep Israel in a ‘wait and see’ mode for a few more months. It is the latter two options—an impasse in the talks or agreement to a bad deal—that would pose the more complicated policy dilemmas for Israel, with the ‘bad deal’ scenario posing the most difficult one of all.

A breakdown and suspension of the talks would be a problematic development, leaving the issue unresolved, and with the prospect of Iran returning full force to advancing its nuclear program in all respects. However, the crisis would nevertheless remain squarely in the court of the P5+1, and there would be an expectation of continued international commitment to resolve the crisis, although—depending on what led to the impasse—the six parties could also find themselves facing some internal dissent that undermines their continued ability to work as a group. Still, continued pressure on Iran through existing and most likely stepped-up sanctions would be expected, and perhaps more concrete threats of military consequences. Israel’s main course of action in this scenario would be doing whatever it could to continue to help beef up P5+1 determination and pressure on Iran.

It is therefore the ‘bad deal’ option—namely, a deal that does not dismantle the significant elements of Iran’s nuclear program—that would have the most severe implications for Israel. The very fact of having concluded a deal would likely mean that the international community will feel that it has done its part, and there is likely to be a sharp decline in the attention or concern devoted to Tehran’s efforts in the nuclear realm. Everyone will be happy to point to whatever minimal Iranian concessions were secured, while underscoring that the inspection regime will do the job, and to have this off their collective agenda so they can get back to business with Iran. This will leave Israel and other regional powers exposed to the threat, and with the need to carve out their own approach to this new and very dangerous regional reality.

Before moving to Israel’s options if the P5+1 concede to a bad nuclear deal with Iran, here are a few words on what we mean when we say ‘bad deal’, as well as on the conditions under which the international negotiators might end up agreeing to such a deal—that would leave Iran dangerously poised to move to breakout in what could be unstoppable short order.

If we consider the list of problematic elements of Iran’s nuclear program, the main issues are Iran’s uranium enrichment activity, its work at Arak which could support a plutonium route to nuclear weapons, the weaponization aspects of Iran’s nuclear program and the delivery mechanism: ballistic missiles. The lack of strong and intrusive verification is also a major current concern. The issues that must be addressed regarding uranium enrichment are the number of centrifuges and their type, Iran’s vast stockpile of 5 percent enriched uranium, and the Fordow facility. There are different tradeoffs that could be made, and therefore, there is not only one way to define a bad deal; moreover, a prospective deal could fall anywhere between a mediocre deal to a bad deal, such that there are degrees of ‘badness’.

But a ‘bad deal’ would be one that does not dismantle many thousands of centrifuges, that does not address the issue of advanced new generation centrifuges, that does not substantially reduce enriched uranium stockpiles, that does not alter Arak so that plutonium cannot be extracted and that does not directly confront Iran with evidence of its decades of cheating and working on a military nuclear program. This last element is of paramount importance, because Iran’s violation of its commitment not to work on a military program is the reason why the international community is in a position to demand the extensive dismantling of Iran’s nuclear program that it is demanding. A deal that does not address weaponization is inherently a lousy one, and will ultimately undermine any concessions that Iran temporarily agrees to offer.

In principle, it would seem strange and unlikely that the P5+1 might agree to something that is clearly ‘bad’ according to these criteria. And yet, this could happen, because there are many issues involved, which could lead the negotiators to soften their demands—to concede on some issues, while focusing on what Iran was willing to agree to, even though in this negotiation they should remain firm on the entire package. Moreover, although what one defines as ‘good’ or ‘bad’ has an element of objectivity—as in how many nuclear issues Iran has given up—there is also plenty of room for subjective interpretations. Even a bad deal with Iran can be sold as an adequate deal if packaged as “the best we could get,” or “better than the alternative of no deal.” Of course, the sentiment would be, if the P5+1 had pressed harder, they could very well have gotten a better deal. Moreover, a bad deal is certainly not better than the alternative of no deal, because a bad deal will be a deal, thereby granting legitimacy to an unfortunate situation.

We can assume that the P5+1 knows as well as the nuclear experts what is entailed in a ‘good deal’, but their weakness at the bargaining table is that they are loath to pronounce the negotiations to have failed. Such a pronouncement would set the stage for moving to the next step, which many would assume—on the basis of repeated U.S. statements—would involve the possible use of military force. Their lack of appetite (to put it mildly) for military force constrains their ability to be tough negotiators; it means that they will probably go to great lengths to legitimize a deal, even if they know that it will engender many problems down the road. There is a huge difference (for policy makers) between short- and long-term implications of any policy decision.

All of this leads to the conclusion that there is a realistic option of a bad deal. Sadly, the P5+1 will know it is a bad deal, but are likely to accept it anyway.

Where does this leave Israel? Basically, with no good options. There was much debate in over the past few years that if all else fails, Israel will take matters into its own hands. Can Israel really do so? As far as any unilateral military option is concerned, Israel does not have a realistic option in this scenario. Leaving aside the question of Israel’s capability to seriously damage Iran’s vast nuclear infrastructure, there are sobering political implications of such a move, at least in the short term. The P5+1, led by the United States, will have just pronounced the deal with Iran to be an acceptable one. Is there any scenario in which Israel would strike in clear opposition to the United States?

Israel will practically be left with two courses of action: to strengthen and diversify its nuclear deterrence; and to swallow this huge pill and not enter into a confrontation with the United States. Rather, Israel will need to work with the United States in earnest on all facets of deterrence and defense in the face of a very aggressive and potentially nuclear enemy in the Middle East.

Regarding deterrence, this could move beyond the bilateral Iran-Israel sphere. A ‘bad deal’ might lead countries like Saudi Arabia or Turkey to consider acquiring their own nuclear capability, in which case Israel will face a multipolar nuclear neighborhood sometime in the future—a development that will engender further instability. Israel will have to devise policy for dealing with a multipolar, nuclear Middle East, with multipolar deterrence equations. In this context, Israel would most likely need to revisit its policy of nuclear ambiguity, to assess whether it still serves its defensive needs in a changed Middle East.

In light of this challenge, Israel should prepare to ask the United States for more defense assets, and perhaps once again open the debate over a defense pact with the United States, as an element of a probable U.S. policy of containment toward Iran. The prime Israeli argument against a defense pact with the United States has traditionally been that it would undermine Israel’s independence of action on defense issues. But if the international community enables Iran to become a nuclear state, Israel will have to question whether it can continue to rely only on itself for its ongoing defense.