In Iran Nuclear Talks, Time Is on America's Side 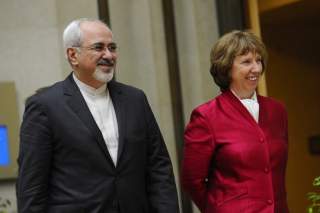 In recent days, President Barack Obama and Secretary of State John Kerry have obliged Senate Democrats in ruling out extending the Iran nuclear negotiations for a third time. This is a mistake. Although a comprehensive agreement remains optimal, a stalemate in the negotiations favors the United States and its allies, and these benefits accrue over time.

The interim accord the P5+1 and Iran signed in November 2013 strongly favored the United States and its negotiating partners. On the one hand, Iran agreed to suspend its entire nuclear program and roll back crucial elements of it. Specifically, Iran agreed to dilute about half of its stockpile of 20 percent enriched uranium—which is close to weapons grade—to 5 percent levels. It agreed to convert the rest of this stockpile to oxide form for use as fuel assemblies in the Tehran Research Reactor, after which time it cannot be further enriched.

In addition, although the deal permits Iran to continue enriching uranium to 5 percent, the agreement forbids it from increasing its stockpile of this low-enriched uranium. In other words, the interim agreement freezes this element of Iran’s breakout capability in place. It also halts any meaningful construction on Iran’s heavy-water reactor, which would give Tehran another route to develop nuclear weapons. Most importantly, the interim accord gives international inspectors unprecedented access to Iran’s nuclear facilities to ensure Tehran’s compliance.

In return for these significant concessions, Iran received very little. In fact, contrary to common belief, none of the significant sanctions against Iran’s oil or financial sectors have been suspended. While these remain firmly in place, Iran is given access to some of its funds that have been frozen in overseas accounts. This relief amounts to just over $1 billion a month. By contrast, sanctions cost Iran an estimated $5 billion in lost oil revenue every month.

Thus, under the interim agreement currently in place, Iran continues to endure significant sanctions even as it forgoes any nuclear progress. This is a winning combination for the United States and its allies, and highly preferable to a breakdown in talks.

Moreover, the agreement becomes more advantageous to Washington and its allies the longer the stalemate persists. Most obviously, Iran continues to lose nearly $4 billion every month the negotiations continue. This economic pain has been exacerbated by the collapse in oil prices, which are expected to stay low for the remainder of the year.

Furthermore, diminishing market expectations will also impede Iran’s economy. In the immediate aftermath of the signing of the interim deal, Iran received an economic boost as domestic sentiment improved and foreign investors returned to the country in the hope that a comprehensive agreement was imminent. The longer negotiations drag on, the more these investors will grow disillusioned, adding to Iran’s economic woes. In fact, Iran has already been forced to delay an important international investor conference numerous times.

Finally, Iran's nuclear capacity further erodes the longer the stalemate persists. As noted above, under the interim agreement, Iran agreed to convert much of its stockpile of 20 percent enriched uranium into oxide form to be used as fuel assemblies in the Tehran Research Reactor. Before being fed into the reactor, this uranium can be reconverted into gas form and further enriched for use in a nuclear bomb. As the stalemate in talks persists, Iran is forced to feed more of this stockpile into its reactor, rendering it unusable for use in a bomb. In other words, talking alone will further diminish Iran’s breakout capability.

Although a comprehensive nuclear agreement remains the best outcome, the Obama administration is foolish to rule out another extension of the interim agreement. When it comes to the Iran nuclear negotiations, time is on America’s side.