Iran: Peacemaker in the Caucasus? 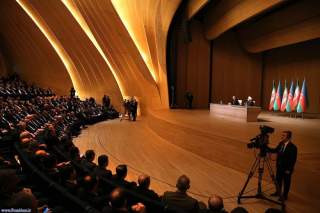 On the back of President Hassan Rouhani's visit to Baku on 12 November, Iran's role in the South Caucasus is once again in the limelight. Since the three states of the South Caucasus – Armenia, Azerbaijan and Georgia achieved independence at the collapse of the Soviet Union in 1991, the Islamic Republic of Iran has officially always upheld that it pursues a policy of friendship and of equal treatment of its three smaller northern neighbors. In reality, the period of 1991-2014 has witnessed Tehran’s stance toward the region fluctuate between a policy of interference (in the case of Azerbaijan) to giving precedence to Russian interests in the South Caucasus. Accordingly, Tehran, which has otherwise close historic ties to all the three states in the region, has largely failed to play a constructive role in the diplomatic arbitration processes to find political settlements to the region’s territorial conflicts. Iran’s posture and input in the case of the Nagorno-Karabakh conflict illustrates this point rather convincingly.

When President Hassan Rouhani was elected in June 2013, he vowed that his government will pursue a foreign policy that is conciliatory and with an emphasis on improving ties with Iran’s immediate neighbors. However, while Rouhani’s repeated policy statements about the need to break with Iran’s unfavorable image among many of its regional neighbors has considerable backing in the byzantine makeup of the Islamist regime in Tehran, he has so far failed to convert his rhetoric to tangible policy change as far as the South Caucasus is concerned. This lack of movement in Tehran’s policy has been glaring. Based on Rouhani’s stated premise and logic, Tehran can by realigning its policy toward the South Caucasus enhance its political stature, further its economic interests while securing one its most basic stated national security priorities, namely the prevention of the resumption of armed hostilities along its northern border regions.

In this case, realignment of policy invariably will require Tehran to address the question of Nagorno-Karabakh. Among the enduring territorial conflicts in the South Caucasus, the dispute over Nagorno-Karabakh between Armenia and Azerbaijan stands out for its potential to break out again in military hostilities. Furthermore, it has a capacity to threaten Iran’s domestic stability given the strong ethnic linkages that are found between the Republic of Azerbaijan and the large ethnic Azerbaijani population of Iran south of the Aras River.

To be fair to Rouhani, his government’s principal focus since coming to office has been to resolve Iran’s nuclear dispute with the international community and to lessen tensions with Tehran’s Arab neighbors. The South Caucasus, never a top priority for any administration in Tehran, was relegated further down the list of priorities. In other words, during Rouhani’s first year in office, Tehran’s dithering policy stance largely continued.

As far as the South Caucasus is concerned, this Iranian dithering has a long and somewhat legitimate history. After the Persian Empire lost its South Caucasian territories to the Russian Empire following successive military defeats in the 19th century, Iran underwent decades of internal political and economic crises which meant Tehran’s capacity to engage in foreign affairs was severely restricted. This handicap applied also to South Caucasus despite the geographic and historic proximity of the region to Iran. Meanwhile, the creation of the Soviet Union in 1922 put the South Caucasus behind the Iron Curtain, cutting Iran entirely off from the region.

At the time of the collapse of the Soviet Union in 1991, the Iranian authorities were on the one hand faced with an enormous strategic vacuum to the north while badly unprepared to respond to this new geopolitical reality. At first the inclination was to consider the entire former Soviet South – from South Caucasus to the five Central Asian States – as fertile ground for Iranian overtures. In particular, the newly independent states to its north were regarded as an opportunity for Tehran to break the international isolation that Iran felt the West wanted to impose on it. Very quickly, however, Iranian optimism about making diplomatic inroads among the new states turned into fear that the United States – Iran’s arch-rival – would fill the vacuum left behind by the Soviets. In other words, Tehran was very early on in the post-Soviet era put on the defensive and preoccupied with defusing what it perceived to be security threats emanating from the newly independent post-Soviet states.

Tehran’s reaction to the Nagorno-Karabakh conflict has to be seen in this context of Iranian security anxieties at the time but which still resonates to this day. With its border only about 40km from Nagorno-Karabakh, the Iranians on the one hand feared the conflict could spillover into Iran. Meanwhile, the irredentist rhetoric of the Azerbaijani government of Abulfaz Elchibey (1992-93) – who spoke of Greater Azerbaijan and the unification of Azerbaijani regions of Iran with the Republic of Azerbaijan – only exacerbated Tehran’s fears. But Tehran’s earliest posture toward the Nagorno-Karabakh conflict was also heavily shaped by geopolitical calculations, something that the official narrative from Tehran usually neglects to highlight. Unlike Turkey, Tehran’s regional rival that unequivocally backed Azerbaijan out of kindred sympathy, Iran maintained good relations with Armenia.

In the eyes of the Iranians, this open channel to the Armenian side of the conflict made them into the neutral and therefore the most suitable regional arbiter that could help bring a diplomatic solution to the conflict. Azerbaijan, however, interpreted Iran’s decision to retain its ties to Yerevan as a case of double-dealing and a symptom of Tehran’s underlying desire to prevent an outright Azerbaijani military victory in the conflict.

Despite Iranian hopes then and since, Tehran’s mediation efforts peaked during the period from January to September 1992, which also happened to see some of the fiercest fighting between Armenian and Azerbaijani forces. That Baku has never considered Iran to be a neutral arbiter is a fact that continues to hamper any mediation role Tehran might want to assume. Any Iranian declarations to the contrary have so far evidently failed to convince the skeptics in Baku.

Today, Tehran’s state-to-state relations in the region ranges from intimate (Armenia) to cordial (Georgia) to the complicated and often downright hostile (Azerbaijan). Whether concerns focus on Armenia’s helping Iran evade international sanctions through its banking sector or Azerbaijan becoming a staging ground for Israeli operations against the Islamic Republic, the bottom line is the same: the South Caucasus has become increasingly entangled in the standoff between Iran and its allies (Russia) and the West and its allies (Azerbaijan). These additional sets of complicating factors further confound any potential peace building function that Iran could have otherwise performed.

Meanwhile, the occasional statements from Tehran leave no doubt that many in Tehran still consider the South Caucasus to be a part of Iran’s historical domain, a sphere where deference for Iranian interests is expected if not vocally demanded. In August 2011, General Hassan Firouzabadi, the Joint Chief of Staff of Iran’s armed forces, famously lambasted the Azerbaijani government for its secular policies and ties to Israel. In an explicit threat, Firouzabadi warned of insurrection in Azerbaijan by stating that “Iranian blood flows in the veins of the people of [Azerbaijan] and their hearts beat for Islam.”

While it is convenient to dismiss such expressions as mere rhetorical brinkmanship on the part of ideological firebrands in Tehran, the fact of the matter remains that such realities continue to prevent the minimum trust that Tehran needs to build up with the authorities in Baku.  To do this, Tehran first and foremost needs to more convincingly recognize that the Republic of Azerbaijan is disinterested in its ideological model – the Islamic Republic’s marriage of religion and politics at home and anti-Western policies abroad - but that such differences of opinion need not be in the way of tactical cooperation on a regional level.

To the extent that the Rouhani administration has crafted a policy toward Baku, this appears to be the new Iranian modus operandi. Certainly and despite the arrival of Rouhani, the overall Iranian theocratic political model continues to have little appeal across the Azerbaijani society. As far as Baku is concerned, the Rouhani administration has a chance to reverse some of the misguided policies pursued by Tehran in the past. That was evidently the subtle message from the meeting between President Rouhani and President Elham Aliyev of Azerbaijan in Davos in January 2014 and when Aliyev visited Tehran in April.

On both occasions, Rouhani reportedly expressed a desire on the part of Iran to assist Azerbaijan in its oil and natural gas industries. Expressing a desire for collaboration in any field is commendable but Rouhani and his government can achieve far more vis-à-vis Azerbaijan if they pursued the same narrow and focused approach as they have seemingly begun toward the United States. Instead of zooming on oil and gas cooperation – a field where Baku has already had great successes in the last 20 years and has established foreign partners – Tehran can introduce new initiatives where its capacity to make a difference does matter. One such initiative can be linked to the frozen conflict over Armenian-occupied Nagorno-Karabakh.