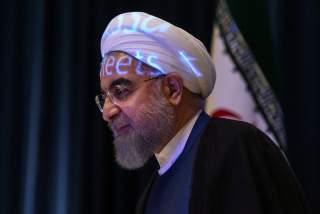 Many American politicians and Iranian-American citizens have voiced their support and solidarity with the Iranian people’s recent protest for a more transparent and equal-opportunity economy.

But they must do more than post emotional cries on social media along with fantasy scenarios of an overnight democratic revolution. They must understand how American policy affects Iran’s economy, and they must demand an end to the seventy-year U.S. economic pressure and sanctions. These sanctions have devastated millions of Iranian lives, enhanced dictatorial governments and fueled a war within Iran and across the region.

Since Iran’s attempt to nationalize its oil in 1951, Western countries, mainly the United States and the United Kingdom, have sanctioned Iran’s independent economy in one way or another. These sanctions, which predominantly have hurt Iran’s people, have instead helped dictatorial wings of the Iranian government—such as the Shah in the 1950s and the Revolutionary Guard today. For the past forty years, the Revolutionary Guard has thrived within international sanctions by building an unaccountable black market economy across Iran that has impoverished working Iranians.

For democrats in Iran, who are utilizing reformists in the government to democratize the system, the 2015 nuclear deal was a chance for opening Iran’s economy to transparency and the world market. It was also an opportunity to push back against the Revolutionary Guard’s hold.

With the election of Donald Trump and his antagonism toward the nuclear deal, the promise of foreign investment has severely sputtered in Iran over the past year. Moreover, if the president reimposes the nuclear sanctions in the coming weeks, it will further scare away foreign investors and halt job creation in Iran.

Reimposing the nuclear sanctions, which would break America’s commitment within the international deal, will also hurt the democratic majority in Iran from utilizing the reformists to push for a more transparent economy. Today, the Iranian people have elected reformists into the presidency, parliament and local precincts across the country to establish a more representative government and economy.

This movement of democratization has been a direct threat to the Revolutionary Guard’s firm control. Iran and its economy are no longer run by ideologue Ayatollahs, but by a Revolutionary Guard who uses the hard-line Ayatollahs and their “supreme leader” as front men and religious figureheads for control over the country.

The Revolutionary Guard and its supporters ignited the recent protests in the city of Mashhad with chants against reformist plans to overhaul the economy with the nuclear deal and an anti-corruption agenda. At the onset of the protests, the Revolutionary Guard pulled back its street soldiers to see how its base, poor rural Iranians, could grow and be directed in the demonstrations. And even though the protest spun out of control and chants against the entire system spread across the country, the provocation of the protest was a test run for the Revolutionary Guard, which wanted to see how it could combat the democratization of the economy in coming years.

If sanctions are reimposed by the Trump administration, then Iran’s economy will further decline, giving the Revolutionary Guard a war cry that can mobilize the poor into the street to defeat the reformists and stage a full take over of the government, moving Iran toward a military regime and ending the hard won recent foothold of reformists.

Those in America who want to help the Iranian people should understand that Iran, short of a catastrophic American ground invasion and occupation, has only two political paths ahead. Either the country and its economy will open to the world and enable its young, educated population to reform the system from within, or, with the imposition of more American sanctions and conflict, the Revolutionary Guard will stage a military takeover by utilizing the protest of the poor masses to establish a new form of totalitarian rule as did the Shah in 1953 and Khomeini in 1979.

Since American foreign policy affects Iran more than any outside nation, concerned U.S. politicians and citizens should look at how their foreign policy affects the economic lives of the Iranian people. As with any multifaceted problem, one can best solve the problem by first fixing their own contribution to the mess.

Farshad Farahat is an Iranian-American actor. He costarred in the Academy Award winning film Argo and is a member of the Board of Directors of Ploughsares Fund, a global security foundation.

Image: A video projection is seen on the head of Iran's President Hassan Rouhani as he arrives for a news conference during the United Nations General Assembly in New York City, U.S. September 20, 2017. REUTERS/Stephanie Keith