Iran and Saudi Arabia: Detente on the Horizon? 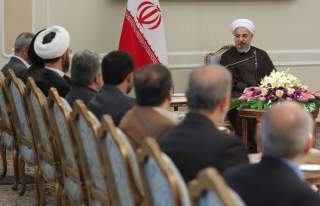 After a year of hesitation, Iranian president Hassan Rouhani is signaling his readiness to reach out to Tehran’s chief regional rival—Saudi Arabia. Last week, a top official was sent to Riyadh; he was the most senior Iranian visitor to the country since Rouhani’s election in June 2013.

Despite the mutual animus of recent years, the Saudis look to be receptive to Tehran’s overtures. Events in the region, particularly the consolidation of the Islamic State in Iraq and Syria, are undoubtedly the key catalysts behind the timing of such a potential détente.

Whether this all-important process of détente can be put in motion depends on a host of factors, not least Rouhani’s ability to first muster a consensus on the Saudi question in Tehran. Only then can the eager Iranian president set out to alter the trajectory of relations between the two pivotal Middle Eastern countries.

Regime hardliners in Tehran, driven not only by Shia Islamist ideology, but also sheer power, have a long record of fighting to preserve the status quo. That is true both of the domestic order as it is of Iran’s relations with the outside world. And for this arm of the Iranian regime, enmity toward Saudi Arabia, the bastion of Sunni Islam, has over the years morphed into a cherished canon.

Rouhani might finally take this bull by the horns. He has been very explicit in recognizing Saudi Arabia as a special foreign-policy test for Tehran. During his election campaign, he made a point of signaling out the troubled relations with Riyadh as an untenable strategic liability for Tehran.

And yet in his first year in office, he failed to jumpstart relations as he had pledged. Breaking the orthodoxy in Tehran on the Saudi question proved a steep climb. Against this background, last week’s visit to Riyadh by Hossein Abdollahian, a senior Iranian official, had an air of inevitability and promise to it. The timing is perhaps the most instructive detail.

Tehran and Riyadh have revealed precious little about the content of the talks between Abdollahian and Prince Saud Al Faisal, the Saudi Foreign Minister. But the trends of the last few weeks suggest this was more than just a token summit.

On August 17, just about two months after the fall of Mosul to the Islamic State, Tehran finally sent a new ambassador to Riyadh. The new Iranian ambassador, Hossein Sadeghi, is someone the Saudis know well and whose arrival they welcome.

Sadeghi is closely associated with Iran’s reformist movement and is a brother-in-law of former President Mohammad Khatami, who sent him to Riyadh as his ambassador during his presidency (1997-2005). That period was in retrospect the golden era in Iranian-Saudi relations with Khatami and King Abdullah both earnestly dedicated to a policy of dialogue between the two countries.

The return of Sadeghi to Riyadh was first mentioned shortly after Rouhani’s election in June 2013. It took, however, until August 2014 before it was officially announced. And unsurprisingly, the Rouhani government is now advertising Sadeghi’s return to Riyadh as a sign of the end to the eight-year chapter of President Mahmoud Ahmadinejad’s damaging approach to Saudi Arabia.

What is striking is that it took Rouhani a year before he could post his chosen envoy to Riyadh. The timing suggests that the profound worsening of the security situation in the region, most importantly the rise of the Islamic State, has weakened the hand of the remaining anti-Saudi voices in Tehran.

They could evidently no longer stop Sadeghi from going to Riyadh and Rouhani from finally launching his policy of détente toward the Saudis. This latest turn of events in Tehran can also be looked at from a different angle. That this was not about President Rouhani beating his critics in a policy debate as much as the anti-Saudi hawks in Tehran—such as the top commanders in the Islamic Revolution Guards Corps (IRGC)—finally admitting to the need for a new Saudi formula. This reading is reinforced by the lack of pushback so far against Rouhani’s Saudi measures.

After all, sabotage is the policy instrument of choice of the hardline faction in Tehran when it sets its mind to defending the status quo. For a brief moment, the hawks seemed hell-bent on sabotaging Rouhani’s Saudi initiative. The day Abdollahian arrived in Riyadh, Fars News—the mouthpiece of the IRGC—reported that an alleged Israeli drone shot down over Iran’s Natanz nuclear facility had been launched from a base in Saudi Arabia.

The obvious intention, not to mention the total lack of evidence to substantiate the claim, pointed to a knee-jerk but clumsy attempt to subvert Rouhani. But perhaps most interestingly, the accusation against Riyadh was then quickly dropped. The day after, the same Fars News reported the drone had been launched from a neighboring country to Iran’s north (read Azerbaijan), but again, without any evidence.

However, what stands out from the entire farcical episode is how quickly the serious charge against the Saudis was dropped. It suggests a new mood in Tehran more supportive of finding ways to work with Riyadh, and no one is apparently going to be allowed to spoil it.

Given this up-and-coming consensus in Tehran to look for common ground with the Saudis, all eyes will be on where tangible cooperation can take place. After recent political developments in Baghdad, where Riyadh welcomed Tehran’s role in clearing the way for Nouri al-Maliki to leave office, there is much speculation about the possibility of an Iranian-Saudi effort against the Islamic State.

That is the wrong litmus test. A joint fight against the Islamic State is complicated by the reality of the movement having amassed vast territorial control not only in Iraq, but also in Syria. And in Syria, Tehran and Riyadh continue to be at loggerheads by backing the Assad regime and the Syrian opposition respectively. To pin the viability of this nascent Iranian-Saudi détente on the ability to reach a compromise over the future of Syria is a mistake.

From Bahrain to Yemen and from Lebanon to the issue of Palestinian reconciliation between Hamas and Fatah, Riyadh and Tehran are often on opposite sides of the divide. That is why the prudent course is to focus on small steps that can perhaps prepare the ground for bigger reconciliatory policy shifts on the regional scene.

As Prince Saud Al Faisal told Abdollahian last week, it is best to work toward improving Iranian-Saudi ties “based on [areas of] mutual interests [and] sincerity.” The question of Syria is not, at least for now, among those on the list open for political compromise. Prince Faisal can, however, take comfort in the fact that when he likely sees his Iranian counterpart—Javad Zarif—at the UN General Assembly in New York later in September, he will hear a message of reconciliation that is backed by a factional policy consensus rarely seen in Tehran in recent years.

Alex Vatanka is an adjunct scholar at The Middle East Institute.