Iran: The Psychology of Sanctions 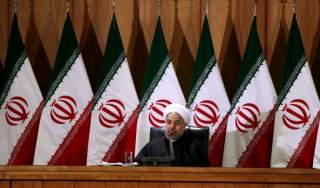 Despite the current impasse in negotiations with the Islamic Republic of Iran over the fate of its once-clandestine military-nuclear program, U.S. officials remain hopeful that a final accord is within reach. An agreement that is verifiable, enforceable and that prevents Iran from pursuing both a uranium and a plutonium pathway to a nuclear weapon would be a tremendous achievement. But we may not get there if American negotiators continue to insist upon weakening their leverage.

Economic sanctions are Washington’s preferred instrument of coercive statecraft for confronting challenges to the international order, including from Iran’s revolutionary regime. While there is an understandable focus on the legal architecture of sanctions, their psychological impact should never be underestimated. Too rapid a shift from fear to greed in the international business community, and from despair to hope in the Iranian market, can blunt the effectiveness of sanctions. And, unfortunately, the sanctions environment for Iran has changed in the past year.

Tehran has been on a modest recovery path since its annus horribilis of 2012 and the first half of 2013, when the Islamic Republic’s economy was hit with an asymmetric shock from sanctions, including those targeting the Central Bank of Iran, Iranian oil exports, access to the SWIFT international banking system, and trade in precious metals. The poor economic management of the economy by the Mahmoud Ahmadinejad government had further exacerbated these sanctions-induced shocks.

Western sanctions pressure has de-escalated since the last U.S. congressional sanctions came into effect in mid-2013, and when, last fall, President Obama threatened to veto a “sanctions-in-waiting” bill with sixty Senate cosponsors. This legislation would have imposed new sanctions only if the Islamic Republic violated the Joint Plan of Action (JPOA) reached between the P5+1 and Iran in November 2013, failed to conclude a nuclear agreement that met specific parameters by January 2015, or supported terrorism against America. This decision to de-escalate the economic pressure reduced the once overwhelming Iranian and international fear of sanctions and buoyed hopes of an Iranian economic recovery.

The election of Iranian President Hassan Rouhani in June 2013, the optimism fueled by the announcement of the JPOA, and the provision of direct sanctions relief as part of the JPOA, also appear to be improving market sentiment, both domestically and internationally. This sentiment appears to be directly contributing to the Islamic Republic’s modest albeit fragile economic growth.

A new quantitative sentiment indicator developed by Roubini Global Economics, working with the Foundation for Defense of Democracies, suggests that there is a connection between this change in sentiment and economic gains by Iran. This sentiment was tracked using proprietary software from RavenPack News Analytics, which provided real-time sentiment, relevance, and novelty scores to all news articles on Iran sanctions published in over 22,000 traditional and social-media sites globally.

This analysis demonstrates that, as positive sentiment has risen since the de-escalation of sanctions and the election of President Rouhani last year, both the value of the Iranian rial (black market) and Iranian GDP growth (both overall and nonoil) have stabilized and begun to increase. The relationship between an improvement in sentiment and the Iranian exchange rate appears to be contemporaneous, while positive changes in sentiment actually appeared to lead GDP growth.

In this relatively more positive climate, Iranians appear to be more confident holding domestic assets rather than hoarding dollars or fueling domestic-asset bubbles. This, in turn, has given breathing space to the Iranian government to stabilize its economy by tightening fiscal and monetary policies to restrain inflation.

International companies, meanwhile, are lining up to reenter the Iranian market. Even when these companies are not finalizing deals, Tehran has been adept at turning the sharp increase in trade delegations visiting Iran and other indicators of renewed interest in the Iranian economy into news stories that improve market sentiment. This has translated into economic gains: According to recent reports from the IMF and World Bank, Iran has nearly halved its 40 percent plus inflation rate, is stabilizing its previously plummeting currency, and is projected for positive growth after losing 6-7 percent in GDP between 2012 and 2014.

In these high stakes nuclear negotiations, this recovery is bad news for the West. Positive shifts in the perceptions of the Islamic Republic globally—as well as inside the country itself—are fueling a recovery beyond what the JPOA intended. Put differently, by changing the sanctions environment, Western negotiators may have inadvertently triggered indirect economic relief to Tehran that is much greater than the U.S. government estimate of $7 billion in direct sanctions relief provided as part of the JPOA—and decreased pressure on the regime in the process.

This may be reducing the odds of success. Indeed, as the easing sanctions environment turns down the heat on Iran’s leaders, they will have less incentive to come to a comprehensive, long-term and verifiable deal that ends their illicit military-nuclear program. Even if there is a deal, and Iran’s economy continues to recover, it will be more difficult for the West to maintain many of the international sanctions that will need to stay in place in order to enforce the verification and inspections regime that will be so critical to preventing Tehran from cheating on any nuclear deal.

A good nuclear deal with the Islamic Republic is still possible. But if President Obama believes that no deal is better than a bad deal, he should lead the effort to temper market enthusiasm about Iran’s economy. One way of doing that is to ensure that a healthy fear of sanctions—both in Iran and abroad—remains. Indeed, now may be the time to pass bipartisan congressional legislation that imposes a serious economic cost on Tehran if it doesn’t come to a comprehensive agreement by January 2015. This will give U.S. negotiators critical leverage as summer diplomacy risks turning into a lengthy fall.

Mark Dubowitz is executive director of the Foundation for Defense of Democracies and leads FDD's projects on sanctions and nonproliferation. Follow him on Twitter: @dubo1968.