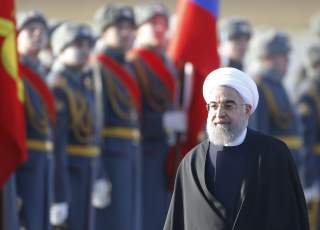 The starting point for any assessment of the Iran nuclear deal—or Joint Comprehensive Plan of Action (JCPOA)—is the recognition that Iran remains a determined nuclear proliferator, and that the deal does not prevent it from achieving its nuclear goal. In fact, if the international community is lulled into believing that the deal “is working,” this will actually provide Iran with much needed breathing space to strengthen itself economically, regionally and in the nuclear realm. If left alone, when the deal expires, Iran will ironically be much better positioned to move to nuclear weapons than it was before the deal was negotiated.

Iran deal supporters claim that the deal is highly successful and prevents a nuclear Iran. In making this claim, they ignore everything that is wrong with the JCPOA—problems that have plagued the deal since day one—and discount the regime’s increasingly aggressive regional profile. Supporters of the deal disregard the fact that because the deal is not bad from Iran’s point of view, there is actually no reason for the regime to openly violate its terms. They insist that “the deal is working” solely on the basis of the certification process regarding compliance, and they send a highly misleading message by equating certification with success of the deal. Moreover, deal supporters are curiously unperturbed by the fact that Iran cheated on its Nonproliferation Treaty (NPT) commitment not to work on a military program, and that the regime repeatedly lies about these past violations. They ignore that Iran’s “narrative of innocence” helps it avoid confrontation and costs. That narrative has even served as the basis for granting it rights of confidentiality in dealing with the International Atomic Energy Agency (IAEA) when there is no justification for allowing a brazen NPT violator such privileges. Indeed, die-hard deal supporters ignore the entire context for assessing Iran’s behavior per the nuclear deal, reducing everything to the issue of certification. They ignore the fact that certification goes beyond the purview of the IAEA. For them, if the IAEA says Iran has not blatantly violated the deal, all is well, and Iran is effectively prevented from going nuclear.

This is nonsense, but it is music to the ears of the regime leaders in Tehran. From Iran’s perspective, the only question is how to better position itself to move to nuclear weapons down the line, despite the JCPOA. Iran has learned that Western states are prone to self-delusion, especially if they are convinced that they will gain some form of short-term benefit. So the regime steadfastly denies any wrongdoing, and makes bold statements about its stellar cooperation, but all the while it is moving forward on all fronts that are not explicitly covered by the deal. These activities—in particular, missile tests (delivery mechanism for nuclear weapons), and the strengthening of regional presence and influence—will help Iran move to nuclear weapons at a later date.

Over the course of 2015–17, in addition to missile tests, Iran significantly stepped up its military campaign in Syria—including war crimes—against Syrian civilians and attempts to set up a new military presence near Israel’s border, while also transferring prohibited weaponry to Hezbollah. As of 2017, Iran began setting up weapons-making factories in Lebanon, and possibly in Syria as well. Iran is involved in the civil war in Yemen, is arming and training Shiite rebels in Bahrain, and the country has been harassing U.S. naval vessels in the Gulf on a regular basis. As long as Obama was president, not only did the administration not push back, but it emphatically claimed that Iran was on solid ground because those activities were not part of the deal. And for the Europeans, there were no problems for them at all, as long as they could return to doing business with Iran.

On the nuclear front, Iran has found that it can test the waters and push the envelope, as long as it is careful not to do anything too blatant. Of course, it has no reason to flagrantly violate a deal that gives it time to build up its nuclear infrastructure and strengthen itself in economic and regional terms—all in return for minimal concessions in the nuclear realm and desperately needed sanctions relief.

Clearly, there is a need to change course on Iran. A new publication has offered advice to the Trump administration on how to walk away from the bad deal. While many people advocate for abandoning the JCPOA, my take is that as bad as the deal is, renouncing it would most likely be a lose-lose proposition at this very late stage. It makes more sense to keep the problem that the Trump administration has inherited while changing most everything else in America’s approach to Iran.

On the deal itself, the administration should make every effort to convince the other members of the P5+1 to clarify and change some issues with direct relevance to the JCPOA. These efforts include setting the record straight on Iran and clearly establishing that it violated the NPT (based on the IAEA report of December 2015). As a state with no qualms about cheating on its commitments, Iran cannot be trusted, and is not entitled to any special confidentiality rights in its dealings with the IAEA, certainly not at this stage. Moreover, the United States cannot accept an unconditional sunset of the deal’s provisions, if there is no change in Iran’s behavior and approach.

The United States must insist on transparency and greater detail with regard to IAEA reports on Iran, as well as openness regarding deliberations and decisions of the joint commission. It must insist on clearing up ambiguities in deal—specifically on the provisions that set the rules for inspections at military sites. According to recent reports, the IAEA has not inspected many suspicious military facilities, either because Iran refused, or the agency resisted asking for them for fear that Iran will refuse. This is unacceptable. There is a need to look into German intelligence on Iran’s attempts to circumvent the terms of the Procurement Working Group, and to place intelligence gathering regarding Iran-North Korea cooperation in the nonconventional realm very high on the agenda, especially in light of recent developments with ICBM testing in North Korea.

Additionally, the United States must respond with determination to Iran’s provocations, in rhetoric and action. It must apply pressure at every turn, and restore U.S. deterrence vis-à-vis Iran, rather than acquiescing in its emboldened regional behavior. Much damage was done in terms of U.S. deterrence during the final years of the Obama administration due to his reluctance to push back on provocations. Inaction on the part of the United States was regarded by Iran as weakness.

The stronger Iran gets—economically, regionally and in terms of its nuclear infrastructure—the more difficult it will be to stop it from attaining nuclear weapons down the line. There will, in fact, be little that can be done to stop it.

In the final weeks before presenting its Iran policy, the Trump administration is facing a growing campaign waged by deal supporters against whatever harsher measures might be deemed essential in order to make up for the weaknesses and holes in the deal. As such, changing course on Iran will also necessitate devoting time and energy to the internal U.S. debate—to turn around the narratives that originated in the Obama years. The famous “echo chamber” created by the previous administration in support of the deal continues to reverberate among deal supporters. The distortions in their messaging must be exposed, especially regarding the slogan that the deal “is working.” If the United States lets down its guard on this basis, it will surely wake up with another North Korea.

Moreover, the administration must be very clear that there is no justification for drawing a line between Iran’s nuclear activities and the rest of its bad behavior. Because the deal does not signify a strategic reversal in the nuclear realm, the nuclear and regional aspects of Iran’s behavior cannot be treated separately. A strengthened and emboldened Iran will be better equipped to successfully confront future international efforts to rein it in, enabling it to more easily advance to nuclear weapons.

The time to get serious on Iran is now. It’s not true that there will always be a last-resort military option if all else fails. The reality is that options do not remain static because international politics are dynamic. The size of Iran’s nuclear infrastructure, the identity of the decisionmakers in Washington, Iran’s regional presence and strength, and the ability of additional actors to curtail U.S. military options are all factors that could evolve in a manner that renders the military option too risky, or something the United States refuses to entertain down the line.

The North Korean case is demonstrating precisely what happens when weak diplomacy produces deals that don’t reflect a strategic U-turn on the part of the proliferator. This example must be held as a constant reminder so that the mistakes made in carving out a strategy toward North Korea are not repeated with Iran.