Iran Will Not Fracture on Ethnic Lines Like Ethiopia 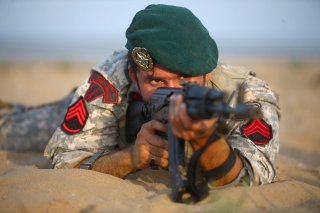 Ethiopia faces an existential crisis. Just over a year ago, Prime Minister Abiy Ahmed provoked a war against the country’s northern Tigray state when, angered at the local government’s refusal to delay elections, he sent in the army. He believed it would be a cakewalk and, indeed, he quickly captured the state capital, Mekelle. Abiy, who like many Ethiopians bore many grudges against the Tigrayan People’s Liberation Front (TPLF) for previous abuses of power and human rights violations, sought to settle old scores. In practice, this meant targeting and killing TPLF leadership and old guard such as Seyoum Mesfin, Ethiopia’s seventy-one-year-old widely respected former foreign minister. The problem with this strategy is that, while older TPLF leaders had once been part of Ethiopia’s ruling coalition and so embraced Ethiopian nationalism, younger Tigrayans have little interest in being part of Ethiopia; many would prefer independence. This might be a moot concern had Abiy won, but the Tigray Defense Forces retreated to the countryside, and then staged a counterattack that routed the Ethiopian Army. The Tigrayans—and some temporary allies of convenience from among Ethiopia’s other ethnic groups—now threaten the Ethiopian capital of Addis Ababa.

Abiy has both imposed a news blackout—hardly a sign of confidence—and subjected ethnic Tigrayans in the capital to collective punishment. It is doubtful he can reestablish control but, even if he does, he has irreparably damaged the fabric of Ethiopia. Abiy and other analysts can lament that former Ethiopian ruler Meles Zenawi had embraced ethnic federalism in the 1994 constitution but the reality is that Ethiopia may now disintegrate into its constituent ethnic units. Eritrea’s 1993 independence fractured the precedent of maintaining established borders not only in Africa generally, but in Ethiopia specifically. Get ready for the Tigray Republic, Oromia, and perhaps one or two other new African states.

While Ethiopia teeters on the edge of dissolution, there is wishful thinking among some in the American policy community (and perhaps in Israel as well) that Iran could follow suit. Certainly, there are similarities between Ethiopia and Iran. Both were ancient empires with a near contiguous history to the present day. European powers preyed on both states, but both Ethiopia and Iran successfully resisted formal colonialism. Both countries are also multiethnic and multi-sectarian. Until just a few decades ago, the CIA estimated ethnic Persians were just a bare majority in Iran although their World Fact Book subsequently raised their proportion to approximately 60 percent. Scholars such as the Foundation for Defense of Democracy’s Brenda Shaffer convincingly question this though she may inadvertently in turn exaggerate minority populations and be too quick to conflate ethnicity with identity.

Regardless, Iran shares with Ethiopia a problem of leadership detached from reality. In both countries, transitions loom. In Ethiopia’s case, it could be military defeat; In Supreme Leader Ali Khamenei’s case, it will be death. The question then becomes whether Iran goes the way of Yugoslavia in the 1990s and Ethiopia in the 2020s, or whether it will remain a cohesive whole.

The reality is Iran as an entity is more resilient than its regime. History matters. Beyond Russia’s and Great Britain’s erosion of Iran’s borders during the nineteenth century, the country also has a long history of ethnic or regional secessionist movements. There was the Jangal movement in Gilan province from 1915 until 1921, although scholars now question whether its leader Mirza Kuchek Khan was a secessionist. In 1924, there was an Arab revolt led by Sheikh Khazal of Mohammerah, today’s Khorramshahr; Today, many Iranian Arabs believe they would have been better off had the shah not crushed the revolt in their oil-rich region. Decades after the Sheikh Khazal revolt, the late Iraqi president Saddam Hussein took advantage of such sentiments to justify his 1980 invasion of Iran in part to free “Arabistan,” as he called the Iranian province of Khuzestan. Soviet sponsorship of separatism in Iranian Azerbaijan led to the first real crisis of the Cold War. Simultaneously, Kurds took advantage of Iranian weakness to declare the Mahabad Republic, which lasted through 1946 before the central government regained control. In recent years, Baluchi separatists have staged repeated attacks in Iran’s Sistan and Baluchestan Province.

None of this, however, means that Iran’s dissolution along ethnic lines is inevitable, or even likely. Iranians resent strong central authority—both before and after the 1979 Islamic Revolution, Iran suffered dictatorship—and many peripheral provinces take advantage of weak central government to bolster their own autonomy. This same pattern occurred throughout Iranian history, especially against the backdrop of pre-twentieth-century tax farming: Governors calculated that if the shah was too weak to compel collection of their annual tax quota, they could simply defy central authority, keep the money, and rule the province as their own fiefdom.

While Shaffer lays out the most thorough and compelling case to argue that ethnic minorities seek autonomy if not freedom from the Iranian state, arguments that are kryptonite to many in the Iranian studies community, she and fellow intellectual travelers in the policy community who have not been to Iran exaggerate ethnic solidarity. Iran (or Persia, as it was called before 1935) predates the rise of ethno-nationalist states by more than a millennium. Identity and pride in Iranian nationalism even if not sympathetic to the Islamic Republic remain an important component of the Iranian patchwork. While the Islamic Republic has repressed both Kurds and Baluch, this is as much if not more the result of sectarian distrust as ethnic animosity. Members of other ethnicities have achieved top positions in the Iranian political hierarchy. Both Khamenei and former Islamic Revolutionary Guard chief Yahya Rahim-Safavi, for example, are ethnic Azerbaijanis. The late Judiciary Chief Mahmoud Hashemi Shahroudi was Arab. In any post-chaos civil strife, members of the Revolutionary Guard and other centralizing forces are as likely to be from minority groups as they would be from ethnic Persians. It is a mistake to assume ethnic solidarity pervades ethnic groups. Nor, when push comes to shove, would Azerbaijan’s dictatorship want to absorb Iranian Azerbaijanis whose incorporation into the Republic of Azerbaijan could triple its population. Azerbaijan’s secularism may be attractive to Iranians; its dictatorship and corruption are not.

For those who seek to stymie the Islamic Republic’s ambitions, the ethnic card is just bad policy. As with any embrace of the Mujahedin al-Khalq, a group that ordinary Iranians despise, the result of playing the ethnic card and threatening the nation itself would allow the ayatollahs to wrap themselves in the Iranian flag. Just as Saddam’s invasion snatched defeat from the jaws of victory by allowing Ayatollah Ruhollah Khomeini to consolidate his Islamic Republic at a time when it was teetering near collapse, so too would the promotion of Azeri or Arab nationalism in Iran be a gift to Ebrahim Raisi. Iranians may hate their regime, but they do not hate their country. Iran is resilient. There is a reason why no ethnic movement has succeeded. The unraveling now occurring in Ethiopia will not come to Iran, Iranian diversity notwithstanding.