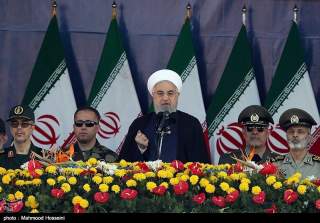 NEW YORK — Former New York City Mayor Rudolph Giuliani, attorney to the president, told the National Interest this weekend that regime change in Iran is already essentially the policy of the United States—and that it should be.

Giuliani made clear that while he acts as the personal attorney to Donald Trump, he was not speaking on behalf of the administration.

The National Interest has profiled the “change in behavior” versus “regime change” debate before; Giuliani sees a distinction without a difference.

“If you listen to John Bolton,” Giuliani told me. “I mean, John Bolton makes it very clear—I guess there’s a miracle that could happen—but it’s very unlikely that these murderers are going to change. So, that probably means regime change.”

Giuliani’s comments came ahead of a turbulent week of news.

President Trump is attempting to drag his Supreme Court nomination of D.C. Circuit Judge Brett Kavanaugh across the finish line amid a sudden storm of sexual-assault allegations. In addition, reports out early Monday indicate that Deputy Attorney General Rod Rosenstein will either be sacked or resign amid a row with the president. “U.S. messaging during [the General Assembly] will be upended if Rosenstein is gone,” Jason Brodsky, policy director of United Against a Nuclear Iran, warned Monday. “It was already on shaky ground given [the Kavanaugh] confirmation. Talk in New York will shift to disarray in Washington rather than foreign policy priorities.” The rumors swirling in Washington about Rosenstein’s departure, however, proved to be groundless.

But first on the mind of those here early in New York—namely members of the National Council for the Resistance of Iran (NCRI), closely associated with the controversial MEK—is an administration and president primed for persuasion, after years of frosty reception in Washington to idea of regime change in Tehran. That Giuliani and Bolton, essentially members of the outfit, are positioned in the administration’s inner circle is a clear opportunity that might not come again.

On paper, Iran promises to dominate the week here: Iranian president Hassan Rouhani will give a hotly-anticipated address to the General Assembly Tuesday and President Trump will chair a United Nations Security Council meeting on the rogue country Wednesday.

In fact, there is some concern in the U.S. conservative foreign-policy establishment that the week could be too focused on Iran. “Expect Trump to slam Iran, but beware [a North Korean] Trojan Horse,” the Heritage Foundation said Monday, wary of the administration’s arguably lenient arrangement with Pyongyang.

I met Giuliani after he addressed the Organization of Iranian American Communities’ annual convention in New York Saturday. “See, the MEK is not so ‘controversial,’” Ali Safavi, a Washington pointman for the group, told me Saturday, keen to point out the robust turnout (I’d estimate around fifteen hundred) and professional impressiveness—and youth—of these members of the North American Iranian diaspora.

But ahead of the U.N. General Assembly, Giuliani, the NCRI and the administration confront an international perception that it is they, not the clerical regime in Iran, that are acting as authorities unto themselves. But the administration is seeking to go on the offensive. Allies of Secretary of State Mike Pompeo, a staunch regime critic, have suggested that former Secretary of State John Kerry may have violated the Logan Act, an obscure eighteenth-century law, for counseling prominent Iranians to essentially wait this administration out.

“What Secretary Kerry has done is unseemly and unprecedented,” Pompeo told reporters in a denunciatory news conference at Foggy Bottom last week. “It’s inconsistent with what the foreign policy of the United States is, as directed by this president. It is beyond inappropriate.”

Still, many of the United States’ staunchest allies are seeking to persuade Washington to change course before it’s too late.

The Wall Street Journal has reported on the “Iran gap” with Europe, and notes that French president Emmanuel Macron, perhaps the European head of government most amenable to this administration, will this week refer to the Iran nuclear deal—which Trump has announced withdrawal from—“as one of the backbones of avoiding Iran getting nuclear weapon.”

Macron will reportedly seek to resurrect a compromise proposal that would keep the United States in the deal, while the international community pursues a parallel arrangement to allay growing concerns about Iran’s remaining nuclear capabilities and clear, regional malign behavior. How Trump responds remains an open question. For now, his administration appears to be staking out a very hawkish line indeed.