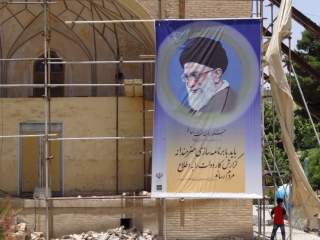 At the same time, Khamenei acts as if he is oblivious to what the deep state is doing. In a speech on October 14 Khamenei asked the highly educated Iranian youth not to leave Iran, but rather to stay and help their homeland. Iran has been suffering from a great brain drain, and Khamenei seems to finally recognize the high cost of the drain. This is the same leader who said several years ago that he has no problem with young educated Iranians leaving their homeland. But his appeal is hollow as long as the judiciary continues to crack down hard on those same young Iranians, and as long as the deep state that hides behind him opposes any relaxation of the tight security environment.

Why is the deep state so terrified? First, it was opposed to the nuclear agreement and was hoping that the red lines that Khamenei had set would prevent reaching any agreement. That did not happen; instead, the Rouhani administration crossed some of the red lines and signed the agreement with the P5+1.

Second, the reformists led by former President Mohammad Khatami, and the moderates led by Rouhani and Akbar Hashemi Rafsanjani (also a former president), are popular with the middle and upper class in Iran. Any significant improvement in the economy will also strengthen their popularity even among the lower class and the poor.

Third, nationwide elections for the Majles and the Assembly of Experts (a constitutional body that appoints the Supreme Leader) will be held on February 26, 2016. There is already a fierce power struggle over the outcome of the elections. Given that Khamenei has been ill, it is quite likely that the next Assembly will have to appoint his heir. By attacking the United States, the “naïve defenders of negotiating with the U.S.” and “agents of U.S. influence,” the deep state is trying to prevent supporters of Rouhani, Rafsanjani and Khatami from playing any role in appointing Khamenei’s heir, or taking control of the Majles.

Fourth, once Western companies can do business in Iran, the economic empire of the IRGC will not be able to compete with them. It is simply not equipped with the latest technology and know-how, particularly in the areas of oil and natural gas. The Rouhani administration has not granted it billions of dollars in oil and gas projects, the way former President Mahmoud Ahmadinejad did. Thus, the empire will be gradually marginalized. Loss of economic might will inevitably lead to loss of political power.

For the first time since the 1979 Revolution, there is no shadow of war over Iran, and tensions between Iran and the West have abated significantly. Given the bloody chaos in the Middle East and Iran’s strong influence in Afghanistan, Iraq, Syria, Lebanon and Yemen, there is a golden opportunity for Iran to play a constructive role in the region, which will ultimately serve its national security and economic interests. But for that to happen, Iran’s political system must open up, the moderates and the reformists must take firm control of the nation and the deep state must be marginalized. The national elections in late February 2016 are the first step toward that goal.