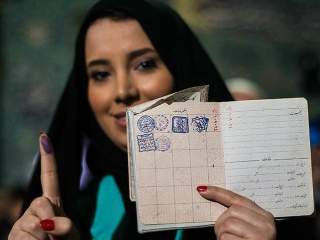 These results represent stunning defeats for the “deep state,” which had played a leading role in rejecting thousands of reformist and moderate candidates, with its websites and newspapers harshly attacking, and in some cases even threatening, the remaining coalition candidates.

The election results also indicate several important facts about Iranian society. One is that Khatami and Rafsanjani enjoy wide popular support. Khatami has always been a respected figure, while Rafsanjani, usually considered as a pragmatic conservative, has increasingly moved toward the reformists since at least 2005. Despite the deep state’s severe attacks on him, and the incarceration of two of his children, he has not backed down from his criticism of the hard-liners and the deep state.

Second, despite severe repression, outlawing their major political organizations in the aftermath of the fraudulent 2009 presidential elections and imprisoning many of their outspoken leaders, the reformists have once again demonstrated their resilience. They have proven once again that reform has wide popular support, and that they cannot be wiped off the political map.

The third fact manifested by the elections is the strength of Iran’s civil society. When it comes to Iran, it is fashionable for many in the West, particularly in the United States, to claim that Iran’s elections mean very little, if anything at all. Some exiled Iranians who are closely associated with neoconservatives have always argued that peaceful change in the political system from within Iran is impossible. But once again, they have been proven utterly wrong.

Fourth, it is not that Iran’s political system is flawless; it is obviously flawed, and Iranian elections are neither democratic nor fair. The deep state still systematically violates citizens’ human rights. But what many Westerners, neoconservative-linked Iranian exiles, and lobbyists for Israel and Saudi Arabia in the United States do not understand, or at least grossly underestimate, is the strength and sophistication of the Iranian society, with a young, highly educated and dynamic population that is well connected to the rest of the world. The Iranian people have once again demonstrated their political sophistication and maturity.

Fifth, the Iranian people have again shown that they prefer peaceful and gradual changes in their march toward a democratic state. They also do not want outside intervention from any foreign power in Iran’s internal affairs. It would not have been surprising, and in fact would have been totally understandable, had the Iranian people boycotted the presidential elections of 2013, given what had happened in 2009. But, once again, by voting for Rouhani, the most moderate candidate, they chose peaceful and gradual change over radical action. The same thing happened on February 26, when the people voted out the hard-liners.

Given that Rafsanjani received the highest number of votes, and that voters elected almost all the candidates that he supported, he would be in a powerful position to reclaim the chairmanship of the next Assembly of Experts when it begins its work in a few months. Given that his close ally, President Rouhani, will also be a member of the Assembly, if Khamenei were to die and the Assembly have to select the next supreme leader, the two would be in a strong position to wield influence. There is speculation that Rafsanjani and his allies may even try to appoint Rouhani as the successor to Khamenei.

Dark clouds of military threats and war, crippling economic sanctions and suffocating repression are gradually leaving Iran. The future seems bright, thanks to the wisdom and political sophistication of the Iranian people and their desire for peaceful change from within, without any outside interference.